U
S and European trade officials are attempting to jump-start negotiations on the Doha
Round of trade liberalization. Progress has slowed as a result of the elimination last January of
textile and apparel import quotas.

Trade officials here and in Europe have been focusing their attention on what they can do to
stem the flood of Chinese exports following the removal of quotas. In the short run, they have been
using the safeguard mechanism in China’s World Trade Organization accession agreement to place new
quotas on imports, but that authority ends in 2008, and that could spell more trouble for them.

At a recent meeting in Paris, US Trade Representative Rob Portman and European Union
Commissioner Peter Mandelson underscored the importance of getting the Doha Round preliminary work
completed by the end of the year in order to get formal negotiations started.

At the conclusion of his meeting with Portman, Mandelson said the EU is redoubling its
efforts in the coming weeks to get the preliminary work out of the way, which will hopefully lead
to successful completion of the round after that. They both underscored the importance of the round
not only to their own countries but to the developing countries where, according to Portman, “we
will be able to pull millions of people out of poverty and improve economic prosperity.”

The basic goal of the Doha Round is to remove barriers to trade throughout the world by
lowering tariffs, eliminating non- tariff barriers and taking other measures that open more
markets.

US textile manufacturers are concerned about the tariff reduction efforts as they see another
flood of imports from China once the ability to use the safeguard mechanism expires. Since the
ability to use safeguards expires in 2008, US textile manufacturers will seek a permanent extension
of the Chinese safeguard mechanism as part of the Doha Round. In addition, they say US tariffs on
textiles and apparel, at an average of around 14 percent, are the lowest in the world and they
should not be cut any further. In the event tariff reductions are considered, the position of US
manufacturers is the tariffs of other countries first should be brought down to US levels before
any further reductions are considered.

How the round deals with cotton could be a major source of problems in the agriculture
segment, which has been one of the most contentious areas throughout the preliminary discussions.
US cotton growers have had disagreements with the EU with respect to whether cotton should be
handled separately from other agriculture commodities. Obviously, much more needs to be done in a
number of sectors before the formal negotiations can get underway. 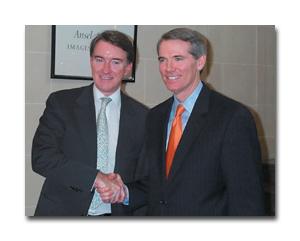 and US Trade Representative Rob Portman


The Consumer Product Safety Commission (CPSC) is taking a hard look at Chinese imports that
may not be in compliance with US safety standards.

At a recent meeting with a number of manufacturing industry representatives, including
textiles, the agency staff and commissioners heard accusations that Chinese imports do not meet the
voluntary and mandatory standards regulating US-made products.

Spilhaus said compliance with US flammability regulations and voluntary standards is
essential if Chinese products are to provide the same safety as products made in the United States
and other countries. Not to comply, he said, would give China a competitive advantage and not be in
the best interests of US consumers. He urged the commission to step up its compliance activities
until China establishes a “solid record” of consistently meeting the rules under the Flammable
Fabrics Act. He also pointed out that retailers, as the ultimate distribution source, have an
important role in ensuring that imports comply with US safety standards.


A textile and apparel component identification system that can help government trade
officials combat illegal transshipments of clothing and textiles is showing considerable promise.
The process being developed by the Oak Ridge National Laboratory (ORNL), Oak Ridge, Tenn., encodes
information invisible to the naked eye that can be used to determine the country of origin of
imports. Products from regions that have special trade agreements with the United States such as
Mexico, Canada, Africa and the Caribbean Basin enjoy special tariff concessions if their finished
products are made of US yarn and fabric, or yarn and fabric produced in the participating
countries.

The US government and domestic textile manufacturers have long contended some producers in
the special trade agreement countries illegally use inputs from nonparticipating countries and
falsify entry and shipping documents.

ORNL has developed an invisible marker that can be read only by special scanners that
identify the source, type, production conditions and composition of textile material.

“Our goal is to have a system using a fluorescent dye or other taggant that could cost just
tenths of a cent per taggant and would survive the harsh manufacturing process but not affect the
quality of the garment,” said Glenn Allgood, head of the team developing the process. He added the
new experimental process would be far less expensive than other information-encoding systems. The
next step is to determine for certain whether the taggant will affect the quality of the product
being identified and then to work with an industry partner to conduct field tests.

Hardy Poole, an industry representative on the research team, said the process will be
invaluable in connection with the US government’s efforts to eliminate the illegal importation of
millions of dollars of non-US textiles that enter the country annually. He says the process could
provide a simple but reliable way to detect illegal shipments and lead to crackdowns on illegal
trade.


The US government’s extension of the African Growth and Opportunity Act (AGOA) for another 10
years is not likely to have much of an impact on the US textile market.

When the pact was first negotiated in 2001, it provided 37 nations in Sub-Saharan Africa with
quota- and duty-free access to the US market. The agreement had a rule of origin requiring apparel
eligible for the special treatment to be made up of fabric and yarn from participating countries.

At the time, US textile manufacturers feared the African nations would become a source for
illegal transshipments of apparel, because there was so little textile manufacturing capability in
the area. That simply has not happened, and that is not likely to change in the near future.

Imports from the AGOA nations currently account for less than 1 percent of US textile and
apparel imports from all sources.

The overall effect of the agreement is perhaps more important. In signing legislation
extending the agreement, President Bush said trade with the AGOA nations has increased by 80
percent.

“People are now making goods that the US consumers want to buy, and that’s helpful,” he said.
“That’s how you spread wealth.”