I
mporters of textiles and apparel say it’s all smoke and mirrors, but a coalition of 14
fiber and textile associations is conducting a major campaign to get government relief from rapidly
increasing imports from China. As China has become the largest exporter of textiles and apparel to
the United States, domestic manufacturers are waging a battle for what they say is their very
survival. China now has 20 percent of the US import market for textiles and apparel, and industry
leaders are concerned about what will happen when all textile and apparel quotas are removed by
January 2005.

The United States Association of Importers of Textiles and Apparel (USITA) says textile
manufacturers are relying on public relations, not facts, in their effort to curb Chinese imports
and the future threat they pose. USITA’s Executive Director, Laura Jones, charges that the textile
coalition is “holding press conferences and parading congressmen and governors before the cameras —
all smoke and mirrors — and not providing factual evidence that Chinese imports are disrupting
markets and displacing American jobs.” She says that instead of seeking “more protection,” US
textile manufacturers should be preparing for the day when all textile and apparel quotas will be a
thing of the past. At that time, she says, apparel importers and retailers “can finally make their
buying decisions like every other industry, focusing solely on which factories can deliver quality
goods on time at the right price” instead of wrestling with a complicated system of quotas. She
contends the removal of quotas will put “wasted money in the pockets of consumers.”

Even though an apparel import is an apparel import, US textile manufacturers realize some
benefits from the special trade agreements such as the North American Free Trade Agreement, the
Caribbean Basin pact agreements and bilateral agreements that require apparel imports receiving
special tariff and quota concessions to use fabric and yarn made in the participating countries.
They see the pacts as a way to compete with Chinese imports.

In their appeals to the government, textile manufacturers and their supporters in Congress
contend that competing with China is anything but fair. They say China manipulates its currency to
realize as much as a 40-percent price advantage; subsidizes its manufacturers; is a major illegal
transshipper; and can price its goods at any level in order to sell them because it has a
state-controlled economy.

The initial thrust of the coalition’s efforts was aimed at getting the government to use the
so-called safeguard mechanism in the United States/China bilateral agreement to reimpose quotas on
imports of dressing gowns, brassieres, knit fabrics, and work gloves, which were decontrolled last
year. Imports of those products have enjoyed double-digit growth since quotas were removed. The
interagency Committee for the Implementation of Textile Agreements has asked for comments from
interested parties to help it determine if the coalition’s petitions for relief are valid.


Leaders of the textile trade coalition, recently joined by the Union of Needletrades,
Industrial and Textile Employees (UNITE), have made it clear they are going to do everything they
can to make textile trade an issue in next year’s presidential and congressional election
campaigns. In a series of meetings in the South and New York City, leaders of the coalition
mobilized textile company executives for what they say will be a major grass roots campaign to call
attention to the plight of the US industry and the need for government help.

The campaign will include voter registration drives to ensure that voters in textile
communities will have an impact on the upcoming elections.

In addition, the coalition hopes to spark e-mail and letter-writing campaigns to Congress
and the White House, underscoring the threat of textile trade with China. While the coalition does
not plan to target any particular candidates, it will support those candidates who understand the
textile trade issue and demonstrate a willingness to do something about it.

Although they have no particular candidates in mind at this time, there are some
textile-area congressional seats that will receive special attention. The retirement of six-term
Sen. Fritz Hollings (D-S.C.), a long-time supporter of the textile industry and its workers, will
focus special attention on the campaign in South Carolina. National Republican election officials
would love to see that seat swing into their camp. The contest for the seat of retiring Sen. Zell
Miller (D-Ga.) will likely see the Bush administration’s textile trade policies on trial. Some of
the other congressional seats in the textile belt could be heavily contested on the basis of the
textile trade issue.

Although President Bush swept the South in his 2004 election, the heavy loss of textile jobs
since he took office could become a major problem for him. Some textile industry leaders and their
lobbyists have indicated the South may not be all that solid if Bush does not come through on his
commitments to protect the interests of the textile industry
(See “Coalition Seeks To Save Textile Jobs,” www.TextileWorld.com, September 2003).

During a series of textile coalition-sponsored news conferences, textile company and union
officials were outspoken in their warnings to the Bush administration. Bruce Raynor, president of
the 250,000-member UNITE, said, “It is unacceptable for countries like China that don’t respect
basic human rights or environmental standards to flood our market, destroy entire industries and
put hundreds of thousands of men and women out of work.” 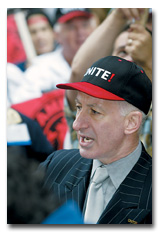 Roger Chastain, CEO of Mount Vernon Mills, said, “I think the Bush administration can forget
that the Solid South is solid any more, and he is running the risk of losing the next election.”

And Auggie Tantillo, Washington coordinator for the American Manufacturing Trade Action
Coalition, said, “Democrat or Republican …, we don’t care, the textile trade issue has to be the
centerpiece of the discussions as we go into the election cycle.”