Since their invention in the late 1930s, man-made fibers production was first dominated by European
and U.S. manufacturers — and later on, by Japan. With the appearance of China as the dominant
producer of the whole textile chain, this scenario has changed drastically.

Also, the share of man-made fibers in global fiber production has turned in its favor. For
decades, the consumption of natural fibers — mainly cotton — and synthetic fibers was more or less
50:50. With the growing global population and the rising importance of technical textiles and
nonwovens, just to name a few reasons, this ratio changes almost every year in favor of man-made
fibers.

Last month, not only did the International Textile Manufacturers Federation’s ITMF Annual
Conference take place September 8-10 in Bregenz in the Austrian province of Vorarlberg, but also
the Dornbirn Man-made Fibers Congress (Dornbirn-MFC) was held September 11-13 in nearby Dornbirn.
This congress took place for the 52nd time and is without any doubt the most important event for
the global man-made fibers community. It is organized by the Austrian Man-made Fibers Institute and
supported by CIRFS, the Brussels-based European Man-Made Fibers Association.

Having in mind the dramatic changes on the global map of man-made fibers production, CIRFS
President Giulio Bonazzi reflected on the actual situation for the European producers versus their
global competitors. In his excellent paper titled “The European Man-made Fibres Industry: Meeting
the Challenges of Tomorrow’s World,” he gave an overview of the current situation and problems the
European man-made fibers industry is facing.

In the 1990s, the share of natural versus man-made fibers was even at 50:50. In the last 15
years the ratio between natural and man-made fibers (MMF) has changed completely, as predicted. In
the year 2012, the world fiber production was 85.9 million metric tons (mt). The fiber breakdown
and the share of each fiber material speak for themselves.

During the 1950s up to the mid-1990s, Europe and the United States dominated the man-made
fibers market. With the rise of China, this situation has also changed completely. Table 1 shows
where man-made fibers were produced last year: 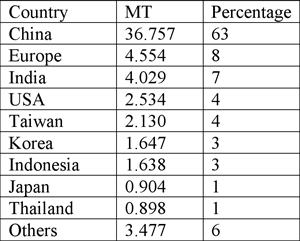 Among the most prominent man-made fibers in use, polyester is by far the king. Today, it
holds a position that is absolutely unbeatable. In this context, the production of polyester is
rising significantly (See Table 2).

Polyester is on a global scale the most prominent man-made fiber. However, Europe already
has a large technical textiles/nonwovens industry. Therefore, the split of raw material must be
different, and Table 3 shows the relevant profile for European man-made fiber production for 2012:

Bonazzi mentioned in this context the challenges for the European man-made fibers industry.
He said that the evolution of the man-made fiber industry is strongly influenced by developments in
the economy worldwide. It is also affected by crises and the recent economic downturn in Europe,
where related government measures, reduced spending and higher taxes to reduce government budget
deficits have led to unemployment and less disposable income. They have also led to a credit crunch
for businesses and consumers — and, consequently, to weak domestic demand in consumer and
man-made-fiber markets. For example, durables and construction are heavily affected in many
countries.

Bonazzi pointed out that man-made fiber overcapacities are growing, noting the following:

As have many other sectors of the textile industry, man-made-fiber production has moved in
the last 20 years towards Asia in general, and China in particular, establishing gigantic
production sites. The man-made fibers industry has its roots in Europe and the U.S., where clever
researchers such as Hilaire de Chardonnet, Paul Schlack and Wallace Hume Carothers developed the
first man-made fibers.

However, the future of the European man-made fibers industry is not dependent on the Asian
overcapacities. It much more depends on creativity, new ideas and innovations of man-made fibers
with particular characteristics and finishes to fulfill the needs of a growing domestic technical
textiles market and special apparel end-use applications such as sportswear, protective and medical
applications.