BIRKENHEAD, United Kingdom — April 19, 2012 — During the past month, Cotton Outlook’s estimate of
world consumption during the 2011/12 cotton season has been reduced by nearly 500,000 tonnes, owing
principally to a significant reduction for China (minus 400,000 tonnes) and more modest downward
adjustments for India (-69,000) and the United States (-22,000). During the same period, the world
production estimate has undergone only a minor net reduction, a downward reduction for the United
States having been largely offset by an increase for Turkey. The net result is to raise to nearly
4.5 million tonnes the amount by which production is expected to exceed production during the
current campaign.

Despite lower production and higher consumption next season, latest forecasts indicate that a
further 1.3 million tonnes plus will be added to world supply during the course of 2012/13.


Full details of Cotlook’s figures for this season and next are published in this week’s
edition of the weekly Cotton Outlook magazine. For details of how to subscribe please visit
www.cotlook.com, or email subscriptions@cotlook.com. 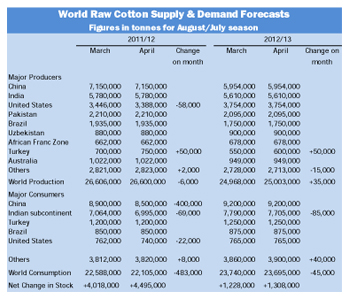 The National Retail Federation: Retail Imports Expected To Grow Dramatically During First Half Of...