According to the company, a redistribution of the carding zones in the flats area and
redesigned flats guiding enables the new card to increase production performance by up to 40
percent while maintaining or even improving sliver quality. The C 70 card features 32 operative
flats, providing a 45-percent-greater active flats area than the C 60, and a 60-percent-greater
area than conventional cards. Thanks to the new card’s precise flats guiding system and updated
design, a precise and reproducible minimum distance of 0.1 millimeters can be set between the
cylinder clothing and the flats. The company also has reorganized the flats cleaning function.

Other C 70 features include: an extraction knife with variable ejector distance located in
the pre- and post-carding area to optimize fiber utilization, plus quick exchange of the knife
without tools; a frequency converter that enables infinitely adjustable flats speed independent of
the cylinder speed; and 15-percent lower energy needs per kilogram of produced card sliver than the
C 60. Options include Rieter’s exclusive fully automatic integrated cylinder grinding system. 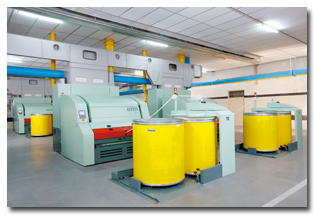