Heimtextil, a major international trade fair for home textiles and contract business, took place
January 14-17 in Frankfurt. Despite bad forecasts from the markets, exhibitors and visitors were
both satisfied with the show’s result.

A total of 2,721 exhibitors from 64 countries attended the show, some 10 percent fewer than
in 2008. In spite of unfavorable initial indications, both exhibitors and visitors were pleased
with the results, especially in the wallpaper and wall covering, bed linen, and contract business
sectors.

The degree of internationality dropped by one point to 63 percent, which was better than
expected in this particular economic situation. According to the organizer, Messe Frankfurt GmbH,
more than 74,000 visitors from 121 countries attended the show — less than in the previous year.
Germany remained, as it has traditionally, the strongest nation, with some 27,000 visitors and 440
exhibiting companies. The top 10 visitor nations were Germany, Italy, United Kingdom, Netherlands,
Spain, France, Belgium, Turkey, Poland, Greece and the United States.

Exhibitors were particularly pleased with the good frequency and top quality of the visitors.
Apart from the traditional visitor groups such as interior design and the textile industry, more
visitors were welcomed from sectors such as architecture, hotel and hospital.

Visitors appreciated the quality of the exhibitors’ product novelties and marketing
incentives for the coming season. Detlef Braun, managing director of Messe Frankfurt, said, “
Heimtextil has managed to give the exhibitors and the visitors an orientation with new design
impulses, innovative entrepreneurial approaches regarding sustainability principle and modern sales
possibilities.” 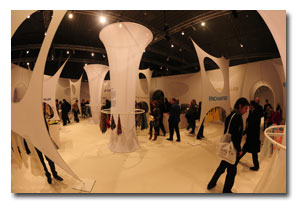 Heimtextil’s Trend Show presented six trend themes under the motto “Expect the Unexpected,”
providing an overview and a preview of current home textile trends that reconsider and reinterpret
established concepts for today’s market.

As always, the contract business was prominently featured at Heimtextil. More than 350
exhibitors from different sectors participated in the “Contract Creations” marketing initiative,
which provided easier access to new textile products for people working in the areas of
architecture, interior design and planning.

Heimtextil 2009 also was a success for the visitors. According to show organizers, 91 percent
of all surveyed people from all around the world were very satisfied with new ways of doing
business. The results of the survey confirmed trends from previous years: Positive business factors
and purchasing criteria for consumers this year are sustainability and new products.
Quality-assurance protection and transparency for sustainable procedures in production and the
supply chain are important steps for the market.

Not only Heimtextil has highlighted the trend towards nature and natural fibers.
Organizations such as Cary, N.C.-based Cotton Incorporated and Washington-based Cotton Council
International are putting a lot of emphasis on cotton, with various actions and support throughout
the year (See “
The
Rupp Report: The [Cotton] Empire Strikes Back,” www.TextileWorld.com, Jan. 13, 2009). In a
media orientation, both organizations provided information in general about their news about green
cotton issues; and in particular about progress and opportunities, resource scarcity and scientific
developments, as well as consumer and trade perceptions.

The Trend Show — always a highlight at Heimtextil — was held in the Forum level 0, and was
probably better than ever. The Trend Show gives trade visitors an overview and a preview of how
current trends can be applied in the daily textile business. This year, the Stijlinstituut
Amsterdam was responsible for planning and organizing the Trend Show. It’s no wonder that this
year, the trend forum attracted more visitors than in the years before. Congratulations on this
exceptional job.

The motto of this year’s Heimtextil trends — “Expect the Unexpected” — stood for current
trends that reconsider and reinterpret tried and tested ideas and, in doing so, encounter
unexpected ideas. The six trend themes — “Illusionist,” “Time Traveller,” “Fortune Teller,” “
Alchemist,” “Witchcraft” and “Enchanted” — emerged from the Trend Table’s consideration of the
various inspirations and influences.