Post Consumer Carpet Processing Technologies LLC (PCC), Quogue, N.Y., has been named one of three
winners in the Earth category of the World Energy Globe Award, an award honoring environmentally
sustainable projects from around the world in five categories including Earth, Fire, Water, Air and
Youth. The only winner from the United States, PCC’s post-consumer carpet recycling technology was
one of 853 projects from 109 countries submitted for consideration. 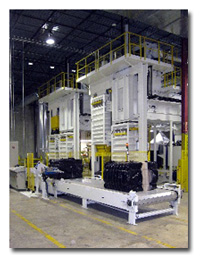 PCC Line: Each PCC carpet-separating line can divert up to 30 million pounds of used carpet
annually from landfills.

According to PCC, an estimated 5 billion pounds of non-biodegradable used carpet is sent to
landfills each year. That volume is equal to 1 mile by 1 mile by 100 feet. “If incinerated, the
carpets will release toxic chemicals,” Levy said. “If accumulated, they never will disintegrate,
posing terrible problems for future generations.”

“By reusing the [carpet] components, business people can be both profitable and socially
responsible,” added Dell’Orco. “We hope the recognition from this award will stimulate companies
and governments to help clean up the Earth’s landfills.”

The 2007 World Energy Globe Awards will be presented on May 26, 2008, at the European
Parliament in Brussels by European Parliament President Hans-Gert Pöttering and former United
Nations Secretary General Kofi Annan. The gala event will be broadcast globally on television and
is expected to be accessible to 2.5 billion households.