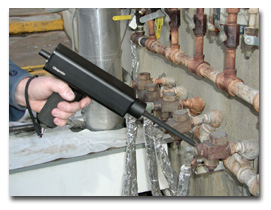 Handheld instruments such as U.E. Systems’ Ultraprobe can be used to detect air leaks in
compressed air pipelines.Detecting Air Leaks
Using ultrasonic technologies to test for air leaks can save textile manufacturers thousands of
dollars in wasted air and energy.It is hardly surprising that the industry that uses the most
compressed air in its manufacturing processes is also the one most likely to waste air. What is
surprising, however, is how often the waste goes undetected especially when air leaks can easily be
detected with ultrasonic technology and the exact cost of the waste can be measured, according to
Alan Urwick, director, Anovotek Energy, Clinton, S.C.Anovotek Energy provides consulting services
and energy audits for industrial manufacturers. For the last few years, the companys focus has been
primarily on the textile industry. Using an industry standard to calculate the loss, Urwick found
that a plant that spends more than a million dollars a year on compressed air can lose anywhere
from $75,000 to $100,000 in wasted air through leaks if it does not have a leak management program.
Urwick based these figures on the energy standard number for the cost of compressed air 19 cents
per 1,000 cubic feet, 4 cents per kilowatt-hour of electricity. Using Ultrasound To Find The
LeaksSince the advent of air-jet technology in yarn and fabric formation, the textile industry has
become the largest user of compressed air. According to Urwick, most companies have several
powerful compressors that deliver thousands of cubic feet of air per minute to the manufacturing
processes including ancillary processes such as static pneumatic functions. In some fabric
formation processes, air does the work: A stream of compressed air carries the yarn across the
air-jet machine that weaves the fabric. In air-jet spinning, two nozzles of air positioned in just
the right way twist the fibers to make the yarn. To find air leaks, Urwick and his team rely on
ultrasonics to pick up sounds that the human ear cannot. Pressure and vacuum leaks produce a
turbulent flow, which has strong ultrasonic components, Urwick explained. And leaks can be located
more easily while the system is under pressure.When using a handheld ultrasonic instrument such as
the Ultraprobe, manufactured by U.E. Systems Inc., Elmsford, N.Y. the inspector puts on headphones
and listens for the telltale sounds of air leaks by waving the instrument around like a wand and
pointing it towards pipes and fittings. The instrument picks up leaks close by and as far as 50
feet away.We begin the inspection by creating a series of zones to prevent the possibility of
overlooking a section and missing some leaks, Urwick explained. We dont look at the places where
air is being supplied to the process or at the point where its being used, because air is expected
to leak there. Instead, we go to the regulators, the filters and the solenoids that activate the
machines. The method for detecting leaks with ultrasonics is straightforward. An inspector scans
the lines, listening for the distinct rushing sounds that signal compressed air leaks. Continuously
adjusting the instruments sensitivity/volume control, he follows the sound until the loudest point
is heard. Since ultrasound is a short wave signal, an inspector can discriminate between irrelevant
background noises and the actual leak signal. A rubber focusing probe is then attached to the
instrument, narrowing the area of reception to shield against competing ultrasounds. This helps to
isolate and pinpoint the exact location of small leaks. Throughout the inspection procedure, close
attention is paid to problems such as loud leaks that can be spotted and tagged without the aid of
an ultrasonic detector. Even with ultrasonics, the human element plays a role. Urwick and his team
have developed experienced ears over time, which help them determine the size of a leak. Draining
The BudgetUndetected leaks can be an unnecessary drain on a companys operating budget, and without
ultrasonics technology, testing would be virtually impossible, according to Urwick. With as many as
400 machines, each with 10 to 15 connections, using the sudsy bubble test would be a tedious and
time-consuming job. Urwick said. In the past, technicians would walk through the manufacturing
rooms on a Sunday when the plant was closed, relying on the human ear to spot leaks. Unfortunately,
this is not a very effective method, Urwick said, as most leaks occur only when machines are
running. According to Urwick, a typical facility with 300 weaving machines and 40 to 60 spinning
frames can require two people eight to 10 hours to conduct an ultrasonic leak survey. Leak checking
takes this long because it is extremely comprehensive, and inspectors have to open the panels on
every machine, Urwick explained. Once the survey is completed, inspectors record their data and
write a very detailed list of where the leaks are, their sizes, and what they are costing the
company each month. The report is sent to the appropriate department for repairs. It is not
unreasonable to expect that most facilities can cut down 5 to 10 percent of their compressed air
costs simply by implementing a leak detection and repair program, Urwick said.In addition to
locating leaks, Anovotek Energy uses ultrasonics to listen to and evaluate the function of steam
traps, he added. We have also used ultrasound to monitor motor bearings to learn if they are
performing as they should. However, it is as a leak detector that we find ultrasonics technology
most effective. For many companies, compressed air has become as essential a utility as electricity
or water. Urwick concluded, When you can measure your air loss exactly, it makes a very powerful
case for leak detection with ultrasonics.
Editors Note: Alan S. Bandes is vice president, marketing, U.E. Systems Inc.