ATMI Annual MeetingBy James A. Morrissey, Washington Correspondent Opportunities
Textile industry leaders see problems, but also some opportunities ahead.At a critical
time in the history of the US textile industry, mill executives attending the 54th annual American
Textile Manufacturers Institute (ATMI) meeting took a hard look at the future, saw some mighty big
problems, and discussed what they need to do in order to survive in the increasingly competitive
world market for textiles.During three days of information-packed sessions, ATMI members and
government officials discussed ways to combat a continuing wave of imports and limited overseas
markets for US textiles and apparel that have resulted in a textile trade deficit of $5 billion,
the loss of 25,000 jobs in the past year and seven consecutive years of declining textile mill
shipments. Overshadowing the discussions was the specter of the impending removal of all textile
and apparel quotas in less than two years.By far the biggest news was made by US Department of
Commerce Under Secretary of International Trade Administration Grant Aldonas, who reiterated the
Bush administrations commitment to help the US textile industry become more competitive in world
markets. He also made a long-awaited announcement of the governments plans to deal with import
surges from China.

Grant Aldonas, under secretary of international trade with theUS Department of Commerce, is
commited to helping the UStextile industry become more competitive in international markets.When
China became a member of the World Trade Organization (WTO) at the beginning of last year, it was
permitted to catch up on a seven-year quota phaseout that other WTO members had enjoyed. There was
an immediate surge of imports in the decontrolled categories that contributed to a 135-percent
increase in imports from China. Last August, ATMI filed a petition with the Committee for the
Implementation of Textile Agreements (CITA), asking that the quotas be reimposed under the
so-called safeguard mechanism in the China WTO accession agreement.Aldonas announcement was well
received by the leadership of ATMI, although Chairman Van May expressed his disappointment that it
was so long in coming. May said it now appears that the government will act under a strict
timetable, and he said ATMI is looking at additional product categories where Chinese exports are
disrupting the US market.Under the safeguard guidelines, a petitioner for relief must provide CITA
with detailed documentation of a claim that a product from China is creating market disruption or
threatening to impede the orderly development of trade in such products. Once a petition is filed,
CITA will call for public comment and within 60 days of the close of the comment period, CITA must
seek consultations with China. If those consultations are not satisfactory, the United States may
take unilateral action. Some industry observers said the consultation process could be drawn out
and frustrate efforts to get timely relief, but Aldonas said the US government would act to
expedite the process, and he would not permit anyone to game the system.In another announcement
that warmed the hearts of attendees, Aldonas said the United States will take unilateral action
against Vietnam if a bilateral textile agreement cannot be reached in the near future. He also said
an aid package offered to Turkey in return for support of the war in Iraq will not contain any
textile concessions. During the 1991 Gulf War, the United States doubled Turkeys textile quotas in
return for permission to use its air bases to attack Iraq. The US government reportedly offered a
similar increase recently to Turkey, but Aldonas said that is not going to happen this time
around.On another front in the trade battle, Aldonas announced that the government is moving
forward to develop techniques for tracing illegal textile and apparel imports. The Department of
Energys Oak Ridge National Laboratory is working on three possible approaches to creating a marker
system that will help Customs agents determine the country of origin of imports and whether they
are illegal transshipments.Two panel discussions at the annual meeting addressed steps textile
manufacturers can take to increase their ability to gain greater access to foreign markets. David
Hastings, CFO, Mount Vernon Mills, Greenville, led a discussion on how textile companies can
overcome difficulties in financing exports, and problems such as difficulties in payment
collection. James Morris, Southeast director, Export-Import Bank of the United States (Ex-Im Bank),
Washington, discussed how loans from the bank can help textile exporters overcome serious
commercial and political risks involved in exporting to certain countries. Morris said many
problems arise from the fact that textile manufacturers want cash or at least guarantees in
advance, and potential overseas customers want to pay only after their products are sold at retail.
He urged textile manufacturers to take advantage of Ex-Im Bank programs to help reduce the risks of
dealing with overseas customers.Morris said Ex-Im Bank offers insured loans at reasonable rates
with virtually no minimum or maximum on contracts where there is reasonable assurance of payment.
Eligible products must have at least 51-percent US content. He said a particular advantage of Ex-Im
Bank loans is that companies can pay a monthly premium on goods only as their goods are shipped,
thus avoiding up-front payments for the entire amount of the loan.Bohdan Sosiak, partner with Risk
Protection International LLC, Stratford, Conn., discussed how risk insurance can help protect
textile exporters from losses due to a number of causes. He said the basic goal of risk insurance
is to help exporters sell goods abroad and get paid for them, and this can be accomplished by
insuring against both commercial and political risks. On the commercial side, this means insuring
against slow pay and protracted defaults, insolvency and bankruptcy. It also is possible to get
insurance against foreign government actions such as embargoes and license revocations, currency
inconvertibility and transfers, political expropriation and wars, and rebellions and revolutions.
In addition, Sosiak said risk insurers can provide a good deal of client support by providing
market intelligence, evaluations of potential customers and help in finding lending opportunities.
With respect to market intelligence, it is possible to provide insights into country risks,
underwriting trends and financing options, Sosiak said. 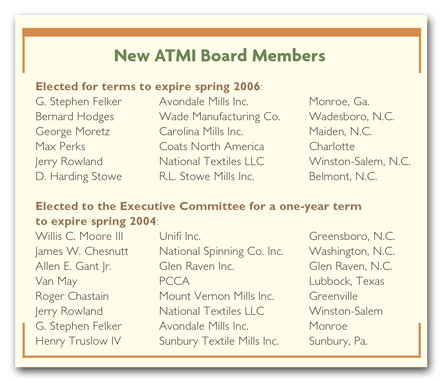 Emy Ruiz, senior vice president and international trade finance manager, Union Planters Bank,
Memphis, Tenn., said financing also is available from international banks. She underscored the
importance of working with an experienced international financing institution when dealing with
such things as letters of credit, international monetary transfers and payment methods. Ruiz urged
textile companies to work with either Ex-Im Bank or commercial lenders, and pointed out a
little-known fact that cotton textile manufacturers can take advantage of the governments Commodity
Credit Corp. financing, which many believe is available only to agricultural commodities.A panel of
leading Latin American trade experts took a look at what moderator G. Stephen Felker, chairman,
president and CEO of Avondale Mills Inc., Monroe, Ga., called the good, the bad and the promising
aspects of textile trade among the nations of the Western Hemisphere. For the most part, the
panelists were optimistic about opportunities to compete against products from China and other
major overseas exporters, which many feel will overwhelm the US market once import quotas are
removed, and if there are significant tariff reductions as a result of the current WTO
negotiations. Jesus Canahuati, general manager, Central American Elastics and Textiles (ELCATEX),
Honduras, the largest textile manufacturer in Central America, emphasized that the single biggest
competitive advantage countries in the hemisphere have is their proximity to the US market and what
that means in terms of inventory control, lead time, warehousing, style changes and eliminating
overstocking of goods. He said that in order to benefit from these advantages, textile companies
throughout the area must improve their communications and work cooperatively to respond to customer
demands. Carlos Arias, vice president, Koramsa, a major apparel manufacturer in Guatemala,
emphasized that worldwide competition has resulted in more demanding and sophisticated consumers
who are more price-and quality-conscious than ever. In every case, the Latin American experts rated
high the prospects for special regional trade agreements. But they underscored the importance of
developing partnerships now in order to encourage investments and fend off the increased
competition that will come when import quotas are removed worldwide. US textile manufacturers
expressed concern with the so-called Tariff Preference Levels (TPLs) that are in some of the
agreements. TPLs enable countries that are not participants in the agreements to enjoy preferential
quota and tariff treatment for a given amount of exports up to a specified level. The US textile
industry is strongly opposed to TPLs, but the US government seems willing to grant them in
connection with some of the regional preferential agreements under certain circumstances. Industry
officials also expressed fear that the US governments proposal to eventually eliminate all tariffs
on textiles and apparel will undercut the advantages of the regional pacts.At the meetings closing
session, Lawrence Chimerine, Ph.D., an economic forecaster, told attendees that the US economy has
slowed, but it is not collapsing, and he expects things to improve before long. He looks forward to
a better and more balanced economy than the United States had in the 90s, and expects modest growth
depending on the outcome of the war in Iraq and its aftermath. Chimerine said the current slow
economic growth is the result of nervousness about spending by consumers, war worries and the fear
of terrorism, a severe winter and a late Easter that delayed retail spending. At the same time, he
said, things are looking up inflation will remain under control, oil prices will decline, jobs will
come back in some areas of the economy, there will be tax cuts, and the Department of Homeland
Security will create additional government and civilian employment. Chimerine also looks for
improvements on the international trade front, since the trade deficit has become a major concern
across the entire manufacturing segment of the economy. This means the textile industry could have
more powerful allies in its international trade battles.