t From Flower To Fabric
Linen, the world’s oldest fiber, retains its luster. The history of linen goes back
10,000 years. Egyptian mummies were wrapped in linen. Jesus was swaddled in linen. Fragments of
linen, in all its forms (straw, seeds, yarns, ropes and fabrics), have been found in Switzerland
among the remains of homes of Neolithic lake dwellers.The botanical name of cultivated flax, the
plant that linen comes from, is linum usitatissimum. A literal translation is linen most useful.
The flax plant is one of natures most ecologically efficient treasures. It is a renewable resource,
no part goes unused, and flax can be grown virtually without using herbicides and pesticides.Seeds
of the flax plant are pressed to produce linseed oil a base for paint, varnish, soap, cosmetics,
linoleum and synthetic resins. Short fibers are used for paper and ropes. Even the bark of the flax
plant has a market in a variety of consumer and industrial products, from horse beds to chipboard.
Textile fiber comes from the stem of the plant. Today, linen is sought after for a wide
variety of end-uses, including apparel, decorative fabrics, table and bed products, and automotive
and industrial products. Consumers around the world buy linen because they like the way it looks,
feels and performs. With new varieties of flax; new processing techniques; and new ways of
spinning, weaving and finishing, the European linen industry has reinvented itself. And all of the
links in the supply chain are working together through the European flax and linen organization,
Masters of Linen, Paris, to market linen globally to a new and growing trade of niche players. 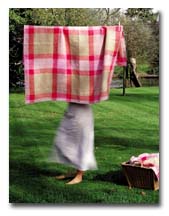 Libeco-Lagae’s 100-percent linen Campagna tablewear collection includes the plaid tablecloth
shown here. In 2001, world production of textile flax was up 22 percent over the previous
year. Within the European Union (EU), textile flax had a turnover of 300 million euros, plus
another 200 million euros for linen yarn.France is the worlds major flax producer, growing 64,000
tons annually on 55,500 hectares of land. It is ranked number-one for quality. Second for quality
is Belgium, coming in with 15,300 tons of flax grown on 13,300 hectares. Holland is third with
4,600 tons grown on 4,000 hectares. By contrast, China ranked sixth for quality grows flax on
100,000 hectares, but produces only 31,000 tons of fiber. Growing FlaxNormandy, with its
oceanic climate, high rainfall and deep silt filtering soils, is the center of flax farming in
France. Terre de Lin, a cooperative of 600 flax farmers, produces 12,000 metric tons of scutched
flax and 6,500 metric tons of scutched tow annually.At Terre de Lin, crops are rotated. Flax is
planted in the same beds once every six to seven years. Sugar beets, barley, corn, peas, potatoes
and wheat alternate. Flax sown in March is harvested in July. 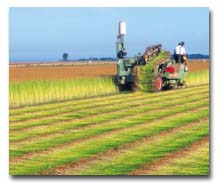 Depoortere pulling machines are used byfarmers in the Terre de Lin cooperative.Flax plants
are pulled from the ground rather than cut, in order to obtain the full length of the fibers, and
to prevent fiber discoloration. At one time, this work was done all by hand. Today, Terre de Lin
uses Depoortere pulling machines. Each machine costs about 100,000 euros. The equipment is owned by
the cooperative and loaned to each farmer. The plants are first de-seeded. Next comes retting
separating the straw or bark from the fiber. There are two main methods of retting dew and water.
Dew retting, the process used by Terre de Lin and most of Western Europe, is done by spreading the
flax in the field. The actions of dew, rain and sun, along with soil-borne bacteria, help to loosen
and dissolve the outer bark. After retting, each farmer in the Terre De Lin cooperative rolls and
stores the flax stems.Flax also can be water-retted. This process involves submerging the flax in
water for between six and 20 days, allowing bacterial action to cause the bark to be loosened.
Today, many farmers consider this process too expensive. Egypt is one country where flax is
water-retted in the Nile River. Processing FlaxScutching, the next step, is done by Terre de
Lin at its plant. This process extracts the flax fibers from the retted straw. Linimpianti machines
move the flax on long tables to remove impurities. Dehondt and Depoortere equipment is used to
further thresh the flax and extract the fibers. At Terre de Lin, the scutching process divides the
scutched flax into fine fibers called line, shorter fibers called tow, and shives. Shives are the
woody part of the plant.Line is further processed by hackling to form sliver. Line sliver is
weighed, manually sorted and packed in bales or rollers weighing 100 kilograms. Line can be wet- or
dry-spun.Tow can be dry-spun on the cotton system or spun on the worsted system. It is also used
for nonwovens, including paper, and for technical products such as insulation. Shives are packed
and shipped for a variety of industrial products.  Research And DevelopmentThe Terre de Lin
cooperative has extensive testing and development laboratories, where it breeds new varieties of
plants. Flax plants are cross-pollinated in a greenhouse. Fifty thousand new varieties are culled
down to 200. From these, one is selected and tested for three years. If it has promise, seeds are
planted in a large field for further testing. Officials from the French governments department of
agriculture approve and certify each new variety. Total time to create a new variety is 10
years. Alain Blosseville, president, Terre de Lin, said growers are looking for plants that
are fungus-resistant and will not fall over in the wind. At the same time, we are working to
improve the yield and fiber content, he said. Our spinning customers are asking for finer, thinner
fibers and homogeneous lengths. 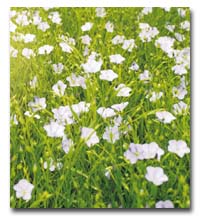 Terre de Lin grows seven varieties of spring flax. Hermis the current favorite. Winter
FlaxRecently, Terre de Lin developed Ade, a new variety of winter flax. It can be sown in September
and harvested in June. According to Blosseville, the advantages of winter flax are many. Retting
conditions are better in June than in July, when spring crops are ready. Generally, growing fields
are idle in winter, so flax cultivation helps to prevent soil erosion. Also, being able to pull
flax a month early extends the use of the Depoortere pulling machines.Ade can grow in temperatures
as cold as -10°C, so it can be planted in Germany and Eastern Europe, where winters are harsh. It
is expected to be available commercially in about two years.There are seven spring flax varieties
at Terre de Lin. Hermis the current favorite, representing 60 percent of the market. In addition to
scutched flax, tow and shive, Terre de Lin produces 3,000 tons of seed annually, which represents
40 percent of the French market. SpinningFlax fiber processor and spinner NV Jos Vanneste
S.A., Belgium, began as a trading company in the late 19th century, buying containers of line flax
retted in the River Lys and selling to spinners in Belgium and Northern France. The company is
family-owned, currently run by the fourth generation of Vannestes. President Werner Vanneste
explained that at one time, 80 percent of the flax grown in France came through this region.Jos
Vanneste continued as a trader until World War II. After the war, the company began processing
scutched tow. This followed with the carding of flax waste for paper making, blending linen with
other fibers, preparing and processing linen for spinning on both the cotton and worsted systems,
and creating pure linen multicolored yarns. Specialty yarn spinning began in 1989. Today, with a
monthly capacity of 500 tons, Jos Vanneste sells quality products to niche markets around the
world.Our strengths are research and creativity, Vanneste said, in order to improve both quality
and production processing, as well as discover new end-uses for linen.One new end-use for Vanneste
yarns is automobile interior fabrics. Nonwovens blending flax with polypropylene are being sold to
prestigious European automobile companies, including BMW, Audi and SAAB. In the United States,
development is underway with major manufacturers. 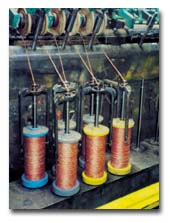 The blending of dyed sliver at Jos Vanneste is done using Mackie machinesAt the Vanneste
fiber processing plant, scutched tow is cleaned and humidity added using Van Dommele equipment. NSC
machines clean and comb sliver. Tow for the U.S. market is blended for spinning on the cotton
system using Rieter equipment. Italy is buying fiber prepared for the worsted system. Fiber dyeing
prior to spinning is a Vanneste specialty. Sliver preparation, blending of dyed sliver and wet
spinning is done using Mackie machines. In the 1960s, 60 percent of Vannestes production was
exported to the United States. With the advent of easy care, the demand for 100-percent linen
lessened. Today, with new, washable and wrinkle-free linens, and increased use of multi-fiber
blends, linen sales are on the upswing. Linen WeavingLibeco-Lagae, located in Meulebeke,
Belgium, has been weaving linen since 1858. The same families still own the business, with the
fifth and sixth generations now running the company. Originally, linen yarns were brought to local
farmers to be woven in their homes on handlooms, much like the way Harris Tweeds still are woven
today. When business expanded, handlooms were installed at one location. In 1904, the first
mechanical looms were purchased. Production ceased and inventory was hidden during the Nazi
occupation of Belgium during World War II. Originally two companies, Libeco and Lagae merged
in 1997. Patrick Lagae is managing director, and Raymond Libeert is chairman and managing director.
When the merger took place, workers concerned about job security relaxed when 60 people were added
to the staff. Today, the work force totals 222. Currently, there is no unemployment in the
region.Libeco-Lagae has an annual production of 5 million square meters, which is more than 60
percent of all linen woven in Belgium. In 1999, it had a turnover of 30.66 million euros. Turnover
increased to 34.45 million euros in 2000. Today, the company is 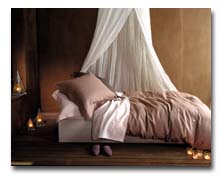 In addition to weaving 100-percent linen fabrics for a variety of apparel, home and technical
end-uses, Libeco-Lagae also manufactures products for its Home Collection. The bed linens shown
above are from a line called Marocco. Libeco-Lagae looms run around the clock and are
monitored by a central computer. During an eight-hour shift, each weaver can be responsible for 10
to 15 looms.Linen yarns from Belgium, France, Italy and Poland are checked for strength, humidity
and color. They are stored for several days to gain the right amount of humidity before warping.
There are three Benninger warping machines, each of which can set up a warp to weave as little as
700 meters of fabric or up to 7,000 meters.Libeco-Lagaes new plant contains 68 looms, 56 of which
are Sulzer projectile looms. Others include recently purchased Sulzer rapier looms. The weaving
plant is kept dust-free by roving robots. Quality control is a hands-on process. Fabrics are
checked for evenness of weave, moisture content, color and any specific treatments.For the apparel
market, Libeco-Lagae weaves delicate handkerchief linens, shirtings, crepes, yarn-dyed novelties,
sport weights and linen/wool blends. For the home, there are fabrics for upholstery, draperies,
wall coverings, table top, bed and bath. Technical fabrics range from artists canvases, luggage
fabrics and bookcloths to paneling, insulation, filtration and even fabrics for light aviation use.
In addition to weaving more than 4,000 different linen or linen-blend fabrics, Libeco-Lagae
recently launched a Home Collection of finished linen products.Libeco-Lagae linens are sold in more
than 50 countries. Eighty-five percent of its product is exported, with current focus on the
Americas. In 1996, the company took over Hamilton Adams Decorative Fabrics in New York. 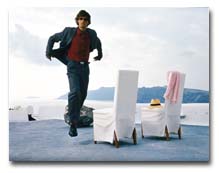 Masters of Linen anticipates trends in order to direct industrial development for its member
companies. This suit is from a collection by the French menswear brand Newman. Photo courtesy of
Masters of Linen.European linen fabrics today are luxurious, elegant, comfortable and practical.
Linen is thermoregulating, nonallergenic, antistatic and antibacterial. Because it can absorb up to
20 times its weight in moisture before it feels damp, linen feels cool and dry to the touch. It is
not by accident that the worlds oldest and most useful fiber is still in great demand.