Chinas future establishes global trends in manufacturing, consumer prices, economic
development and political stability. Both championed and feared by many in the United States,
Chinas accession to the World Trade Organization (WTO) is thought to mark a positive shift for
China toward openness and individual freedom. Concerns remain, however, regarding the level of
openness that will be achieved compared with the competition, thought to be unfair, during the
coming years of transition.Time will tell, as the commitments negotiated by Chinas Ministry of
Foreign Trade and Economic Cooperation regarding opening markets are examined, and the WTO reviews
Chinas free-trade commitments.Chinas population in 2000 was roughly three times that of the United
States, Canada and Mexico combined (See Figure 1). The United Nations estimates there are
22,500,000 Internet users in China almost twice the number in Canada and ten times that in Mexico.
The United States is estimated to have 95,354,000 Internet users. These broad statistics, coupled
with the directives of Chinas 10th five-year plan emphasizing targeted investment and growth of the
textile industry, illustrate the very real potential for Chinas economic growth and global
influence. Textile Technology FlowThe Italian Association of Textile Machinery Producers
(ACIMIT), Milan, has observed strong trends in Chinas consumption of Italian textile equipment.
ACIMIT representative Mauro Badanelli stated, In 2001, the main markets for Italian textile
machinery were China, Turkey and the United States. However, while China continued to account for
an increasing number of Italian textile machines, with an increase of more than 100 percent in
2001, Turkey and the United States were subject to sudden downturns last year, due to a very
negative general economic situation.For many years, Chinese operators have been purchasing Italian
textile machinery. In 2001, weaving machines were largely requested (44 percent), followed by
spinning machines (32 percent), knitting machines (13 percent) and finishing machines (11 percent).
Analyzing the 1997-2001 period, we observe that the annual growth rate of the Italian exports
toward China was 11 percent. A higher annual growth rate was observed by sales of spinning
machinery (more than 28 percent), followed by finishing machinery (22 percent) and knitting
equipment (15 percent), Badanelli explained. Regarding the regional investment areas in China,
Badanelli stated, In recent years, some textile areas adjoining the Beijing and Shanghai zones have
emerged as potential markets for the Western manufacturers of textile machines. We refer to the
well-known provinces of Guangdong, Jiangsu, Shandong and Zehjiang, but also to the emerging markets
of Inner Mongolia, Liaoning, Shanxi and Xinjiang.When asked about the market focus of textile
investment and areas of development, Badanelli added, For example, in Jiangsu, the textile sector
is focused on wool treatment activity. In Inner Mongolia, the activity is mostly in cashmere and
wool production. In Guandong, the knitting industry is prevalent. Generally speaking, we observe a
growing attention paid by Chinese operators to man-made fiber production. Furthermore, in some
developed provinces (Jiangsu, Guangdong, Shanghai and Zhejiang), nonwoven fabric production
capacity increased enormously in recent years.How does Chinas appetite for technology compare with
the rest of the global textile machinery market Approximately 70 percent of the Italian machines
produced are exported, said Badanelli. In 2001, Italian sales abroad of textile machines involved
130 countries, as follows: Asia (37 percent); followed by the European Union (EU) (24 percent);
North America (10 percent); non-EU Europe (10 percent); Eastern Europe (8 percent); and Central and
South America (7 percent).When asked to look to Chinas future, Badanelli said, China will remain a
major market for the Italian textile machinery industry. The quota removals and the WTO entry of
China represent further steps in order to strengthen relationships among Italian manufacturers of
textile machines and Chinese textile operators. 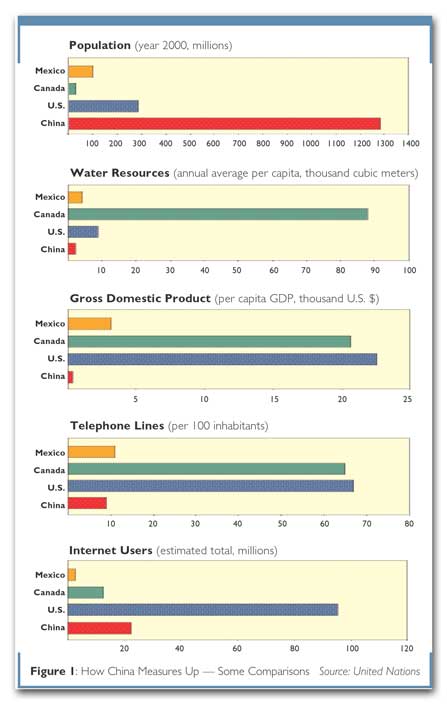 German Textile EquipmentThomas Waldmann, managing director, VDMA Textile Machinery
Association, Frankfurt, reported, In the last decade, the Asian market has developed extremely
well. Nowadays, German manufacturers export some 30 percent of their machines in this region. Being
a textile giant, China surpassed even the United States and became the number-one country in 2001
for German textile machinery exports. Waldmann continued, European countries, such as Italy, Spain
and Turkey and the United States enjoy high reputation for quality products. Therefore, these
countries remain major markets for our member companies in the medium and long term. However, their
future development depends on adapting their strategy to the new developments in Asia.Echoing
ACIMITs observations on Chinas regional developments, Waldmann said, Traditionally, the eastern
part of China obviously [has been] at the heart of development. However, market players report
interesting developments in more remote areas, too. German manufacturers produce machines for all
aspects of the textile chain. All of these machines are heavily requested from Asian
countries.Waldmann added, A specific new development which [has been] going on for some years, and
seen especially in the United States and Europe, is nonwovens. There we had, in recent years,
double-digit growth rates for some nonwoven products. At the moment, we witness a strong
development of nonwoven textiles in Asia. We therefore predict similar growth potentials for
nonwovens in Asia.In our industry, the development of the Asian and Chinese markets is seen as a
positive development. Most member companies [have been] active in the Chinese market for many years
now. The importance of China has led some of the German manufacturers to establish local
manufacturing capacities or to set up service stations. On the other hand, the textile industry is
used to seeing ups and downs, in ever shorter cycles. There is no guarantee that China will be the
most important export market for our manufacturers in the forthcoming years. We recommend our
member companies not focus on Asia alone, but hold a strong foot in Europe and the United States,
as these are the markets which still generate the main innovations, Waldmann said.What should U.S.
textile manufacturers do to succeed in today’s marketplace, and beyond 2005 WTO quota removals with
China Waldmann replied, The 2005 WTO regime will result in more competition in the textile
industry. Whereas much has been written about the threat which Western countries might be facing
from the Asian region, it should not be underestimated that the Asian countries will face strong
competition between each other. This will open niches and new possibilities for American companies
in the future. “Remember that European companies had to adapt to new market situations years ago.
By concentrating on the new technical applications in the automotive and other industries, new
business sectors could be entered. Furthermore, in Europe we still have the traditional textile
industry which has specialized in high quality products, and finally, there are completely new
applications in the technical and nonwoven areas. We expect similar development in the U.S.
market. Other Associations AgreeClay Tyeryar, executive vice president, American Textile
Machinery Association (ATMA), Falls Church, Va., reported on behalf of its members that the
machinery manufacturers need to continue to provide competitively priced, distinguishable products
and look at new ways of doing business, participate in trade events such as CITME and ShanghaiTex,
focus on research and development of products, and apply know-how in order to influence market
focus.Lukas Sigrist, Ph.D., secretary general, Swissmems Textile Machinery Division, Zurich,
reported a clear shift to the Asian market with a focus on the Far East including China. Swiss
exports to Asia rose from 22 percent in 1998 to 38 percent in 2001.Evelyne Cholet, secretary
general of the Paris-based French textile machinery manufacturers association (UCMTF), concurred.
For nearly all the sectors of the French textile machinery industry, Asia now represents about
one-third of their sales China more specifically is always in the top five. Our main exports
concern spinning machinery, fiber processing, nonwoven lines, weaving equipment and finishing
machinery. The particularly active areas are Jiangsu, Zhejiang, Shandong and Yijian and coastal
areas from Hong Kong and Guandong.How will the direction of China effect the French manufacturers
Cholet responded, The business should increase after the removal of quotas. If China will respect
the WTO rules, no particular problem can be seen, and China could be considered as a normal market.
The main problem lies with regard to the intellectual property, a problem China cannot skip and has
to quickly solve by respecting the international regulations. 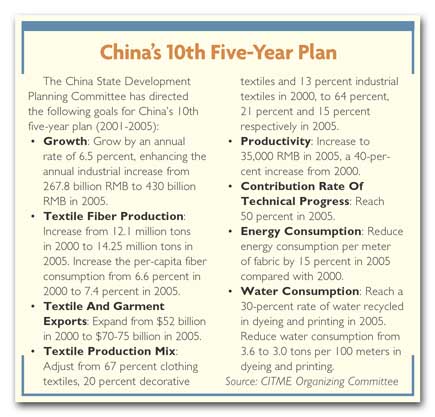 Intellectual PropertyThe abuse of intellectual property rights (IPR) reaches far beyond
textile pattern and textile machinery designs. Concerns range from consumer products to industrial
components and software design. Many exporters to China balance the risk of IPR abuse and the
market for their patent-laden machinery and designs.Nicholas R. Lardy, senior fellow in the Foreign
Policy Studies program at the Brookings Institution, Washington, reported in April of 2001, China’s
legislative body, the National Peoples Congress, has already amended a number of important domestic
laws covering patents, copyrights, trademarks, and foreign investment to make their provisions
consistent with WTO commitments. Although these examples do not necessarily guarantee that China
will be able to meet all of its commitments, they do suggest that the government is making a very
substantial effort to comply with a broad range of its obligations and that it believes that
further economic liberalization and opening up are essential to meeting its own long-term economic
goals.Lardy added, Despite these efforts, it would be extraordinary if China were able to implement
all of its WTO commitments in every detail and on schedule. As part of the process of accession
negotiations, the Chinese government identified 177 domestic laws and regulations dealing with
customs administration, the administration of foreign investment, intellectual property, and
services that must be amended to ensure consistency with WTO obligations. Although a start has been
made, the work of revising all of these laws and getting them approved by the legislature is likely
to take several years. It will take even longer to train the judges and develop the legal
institutions and processes necessary to ensure that these laws are fairly and impartially upheld
and that legal judgments are enforced.The American Textile Manufacturers Institute (ATMI),
Washington, made a submission to United States Trade Representative (UStr), Robert B. Zoellick, on
the pending Doha Round of WTO negotiations, strongly recommending that IPR issues be a high
priority for the United States. We asked that the unfinished trIPS (Agreement on Trade Related
Aspects of Intellectual Property) agenda of the Uruguay Round universal protection of intellectual
property with penalties meted out to offenders be completed in the Doha Round, said Patty Adair,
ATMIs assistant vice president, textile productsandstandards. While U.S. law has provisions to
attack piracy of copyrighted or trademarked designs in our domestic market, enforcement in too many
foreign countries is either unacceptably lax or, worse, non-existent. ATMI asked for WTO agreement
that intellectual property piracy of any kind is wrong and that injured parties may obtain
effective remedies internationally or have the right to retaliate. Questions RemainThe
aggregate increase in advanced textile technology in China, its growing domestic market and hungry
export market, and WTO entry have set the stage for tremendous impact on global markets. With
aggressive development plans and dramatic low-cost labor shifts from farm to factory China has
engineered a plan for its future. The execution of that plan will define the future for businesses,
workers and consumers on a global scale.