Textile Testing For Quick Response
New equipment from Habotex, Raitech accelerates testing time and improves accuracy.Quick
response and just-in-time delivery, hackneyed watchwords for the past decade, become increasingly
important as textile suppliers and purchasers alike seek to shorten the supply-side pipeline.
Quality considerations, mandated by the International Organization for Standardization (ISO), have
forced suppliers to update testing methods, explore opportunities for more rapid testing and
develop entirely new test methods. Organizations such as the American Association of Textile
Chemists and Colorists (AATCC), the German Standards Institute (DIN) and the Society of Dyers and
Colourists (SDC), have joined with the ISO to develop and implement test methods to measure, for
example, percent extractables after preparation, colorfastness after dyeing, and residual chemicals
following finishing.This report covers updates in two important areas: extraction of residual
unreacted chemicals and unremoved chemicals, and prediction of shrinkage and colorfastness to
repeated home laundering.The cost of purified water, steam and utilities in general forced European
textile mills to seek methods for improved preparation, while using a minimum of utilities. The
water used during washing was cut drastically to reduce the load to wastewater treatment, as well
as total energy requirements. Washers were redesigned to use more enhanced mechanical energy in
place of expensive thermal energy to remove contaminants from fabric. Attempts to continuously
ex-tract residual chemicals in real time were met with repeated frustration as streaks and face
deformation made unsaleable goods. The need for rapid testing still existed, and laboratories were
not always close by on the machine floor. Several ideas were evaluated before the first portable,
rapid-extraction units began to appear about five years ago.The Morapex A System And S System

The Morapex A95 and S95 systems, developed by Hans Bors of Switzerland-based Habotex,
gradually have made their way across Europe into textile mills, chemical supplier laboratories and
research institutes. The A unit was developed to offer easy, efficient and complete rapid aqueous
extraction without damage to the material being tested. The S unit was developed with DuPont
Teflon® coatings to handle all solvents. A pre-cut sample of fabric is not required.The A test
unit, which weighs only 8 kilograms (17 pounds), was de-signed to be carried or rolled onto the
factory floor. Once at the processing machine, an end from the latest piece of fabric processed is
placed between the two extraction heads. Approximately five milliliters of the eluting solvent is
then pumped from a small storage bottle to the center of the fabric and then radially through the
sample for a time ranging from 30 seconds to five minutes. The extraction solvent is then collected
in a channel around the edge of the lower head by suction and returned to a small test tube. The
extract captured in a test tube can be either visually examined for color or tested for pH, starch,
etc., by the usual tests. If a dyed and washed sample still has residual unfixed dye, the washing
conditions can be changed immediately without wasting time or continuing to process goods that
would have to be rehandled. More than 200 units of the A95 and A99 have been sold around the world
to textile firms, chemical suppliers and research and university laboratories. Only a few have been
sold in the United States.The improved A99 appeared recently and is being offered in the United
States. The new model contains three separate solvent bottles and provides computer-programmed
extraction temperature (20-98°C), processing time (0.5-5 minutes), and repeat extraction up to 250
processing steps all while maintaining the lightweight, portable features of the A95. Water- and
perspiration-fastness tests can be completed in one to two minutes compared to four hours in the
laboratory. Residual alkali, acid, salts, size, peroxide, and formaldehyde can all be removed and
evaluated. Because of the flexibility of the new model, a rapid simulation of all wet-processing
(for example, desizing, scouring, and bleaching) can be evaluated on a new fabric sample before
running a trial on full-scale equipment.A new test for residual formaldehyde can be completed in
approximately 20 minutes. The formaldehyde-containing extract is combined with an acetyl acetone
reagent and held for 10 minutes at 60°C in an electrically heated thermal block or in a water bath.
Residual formaldehyde forms a yellow complex that can be visually compared with a standard or
quantified at 412 nanometers using a transmission spectrophotometer. The test results compare to
the results obtained with the standard Japanese Law Method (En ISO 14184-1).The S99 model with
Teflon coating is designed for use in a laboratory for more robust extraction with all kinds of
acids, alkalis and solvents at 20-150°C, with cycle times of 0.5-41 minutes. Polyester/cotton
burn-outs can be achieved in minutes. Three two-minute extractions (six minutes total) with
70-percent sulfuric acid or phosphoric acid at 80°C gives results comparable to a 60- to 90-minute
laboratory process in a beaker. The shade of the remaining polyester is unaffected by the
extraction because of the short duration of the extraction.New applications for this portable
extraction technology are constantly being developed in other industries. For example, food
processors can quickly extract fat from sausages to ensure top quality; superabsorbent polymer
manufacturers can quickly determine saturation values; and residual formaldehyde can be determined
by major clothing stores without destruction of incoming merchandise. The applications are
endless.Quickwash Plus Fabric Testing System 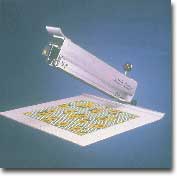 Rapid response has mandated that processing times be reduced in the textile mill and in the
laboratory. Dimensional change testing was studied in the middle 1990s at the Swedish Institute for
Fiber and Polymer Research. A prototype machine was brought to the United States in 1997 and
commercialized by Raitech Inc., Charlotte, N.C., under the Quickwash Plus name. At the time, the
AATCC Test Method 61-1996 Wash Test and the AATCC TM 135-1995 Home Laundering Test required hours
to run samples through five cycles. Could an accelerated test be developed in each of these areas
that would be acceptable to the industry After several years of evaluations by Cotton Incorporated,
Cary, N.C., using various cotton fabrics, five different cotton dye class systems, and several
problem shades, the answer is yes. The Quickwash system could generate levels of fabric color
change that were similar to those generated in five home laundry tumble dry (HLtd) cycles. The
Quickwash program for shrinkage runs in 15 minutes; the wash test is complete in one hour, plus
five minutes to measure dimensional change, or 15 minutes to condition prior to color change
evaluation. This compares to nine hours required for AATCC TM 135-1995.In response to the testing
at Cotton Incorporated, AATCC Committee RA42 developed a new test method TM 187-2000, Dimensional
Changes of Fabric: Accelerated which has been accepted by JCPenney, MarksandSpencer plc and other
retailers. The accelerated dimensional change results are achieved by testing a relatively small
190-by-190-millimeter (8-by-8-inch) fabric sample at high rates of wetting, agitation, extraction
and air drying without the use of detergent. A microprocessor-based controller allows
preprogramming of each component of the test cycle to create custom test programs for a wide
variety of fabrics of different constructions and densities. By the summer of 2000, more than 250
companies involved in knitting, weaving, dyeing and finishing, cut and sew, and retail had
purchased Quickwash Plus units.Raitech has developed a line of Quick products for in-lab testing
and fabric sample evaluation. These include: Quickdry, which dries the resulting wet samples in
minutes; Quickcut, which precisely cuts test samples in an automatic press; Quickpunch, which
punches precise, die-cut samples; Quicktemp, which precisely blends and controls wash-water
temperatures for washing machines; and Quickview, which allows quick and accurate measurement to
evaluate shrinkage.The demands of the industry have once again been met with new technological
advances that help improve response time, while improving accuracy and repeatability.
Editor’s Note: Gary N. Mock, Ph. D., is a professor of textile engineering, chemistry and
science at the College of Textiles, North Carolina State University, Raleigh, N.C.
November 2000

Carrington Textiles : How The Role Of R&D Goes Beyond Fabric Development