Yarn Market ResearchBy Erin Dodd and William Oxenham, Ph.D Open-End Vs. Ring-Spun Pricing
A new progam underway at N.C. State’s College of Textiles uses ATI pricing data to analyze and
forecast production and pricing of open-end and ring-spun yarns. There have been several
comments recently in the textile press regarding the differential pricing of ring-spun and open-end
(rotor) yarn. Further concern has been expressed about the difference in yarn pricing associated
with yarn count, and how this difference is influenced by the yarn type (ring-spun or
open-end). Identifying Pricing TrendsA project currently underway at N.C. State Universitys
College of Textiles, Raleigh, N.C., is investigating possible approaches to predicting future
trends in yarn production in the United States. Various sources of data are being utilized,
including data associated with yarn pricing, some of which has been obtained from back issues of
ATI. Based solely on data from ATI, it is possible to clearly identify certain trends that are
apparent in the figures that follow.Figure 1 shows a comparison of the prices for ring-spun and
open-end yarns of the same count (18Ne) from 1984 to the present. The difference in yarn prices is
also included (ring-spun yarn price/open-end yarn price), and it is clearly shown that the price
difference has increased almost linearly over time.Indeed, while the price difference in October
1984 was 13 cents, the difference in January 2000 was 51 cents. This trend is also shown for other
yarn counts for which prices were available.The reason for the increasing difference in prices is
that while ring-spun prices showed a general increase (up to 1997), open-end prices either remained
static or fell more rapidly than their ring-spun counterparts.Figure 2 compares the prices of 18Ne
and 10Ne ring-spun yarns (again from 1984 to the present), with the difference in yarn price due to
count also included. While there is considerable variation in price over time, it appears the
difference in price between the finer and coarser yarn is increasing slightly. 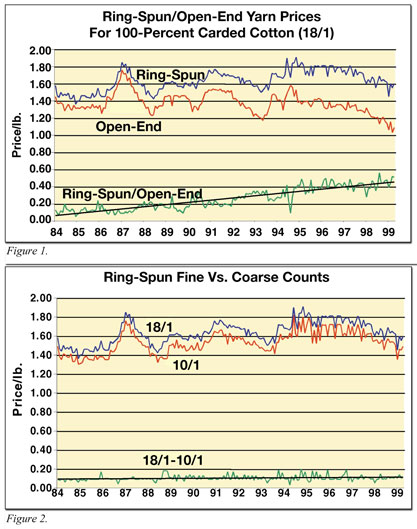 Editor’s Note: William Oxenham Ph.D, is professor, associate department head and graduate
administrator in the Department of Textile and Apparel Technology and Management in the College of
Texiles at N.C. State University.Erin Dodd is a graduate student at N.C. State’s College of
Textiles. She is completing her Master’s degree and preparing to enter the Ph.D program in Textile
and Apparel Technology and Management.