Industry InfrastructureBy Jim Phillips, Executive EditorCompact And Efficient
Air filtration developments save space, reduce dust and increase product
quality.Compliance with OSHA dust standards remains a major expense in both construction of
new textile plants and expansion and retrofitting of older ones, according to executives of air
filtration systems suppliers. The good news, however, is that the hit on space, cost and efficiency
is steadily declining.The trend in air filtration is toward smaller units that outperform their
gigantic predecessors, cost less to install and require less downtime for maintenance.In truth,
OSHA has probably done the industry a favor, said W. Brad Carr, vice president, textile engineering
sales, Luwa Bahnson. Modern air filtration systems eliminate so much particulate matter that
product contamination is not nearly the issue it once was. The efficiency of air filtration systems
in American textile plants has had a positive impact on product quality.Luwa Bahnson,
Winston-Salem, N.C., is one of the major companies in the United States that design and manufacture
complete turnkey air filtration systems, as is Pneumafil, in Charlotte, N.C.We are designing new
systems that offer up to 50-percent space savings over conventional systems, said John Stonestreet,
Pneumafils sales manager. These smaller systems provide greater efficiency than much larger,
older-style systems. We have some applications, for example, that outperform older systems that use
tandem design.Air Filtration ChallengesThe challenge before air filtration system design engineers
has not been solely to keep up with OSHA standards. New, faster production equipment high-speed
cards, spinning frames, looms has significantly increased the amount of particulate matter that
must be removed from ambient air.Its not a linear progression; its exponential, Carr explained. It
is amazing the amount of dust and waste produced by modern machinery. A rule of thumb is that a
typical mill 20 years ago would have required 20 air exchanges per hour (AC/H) to keep particulate
matter within limits. Ten years ago, the same mill would need 30 AC/H. Today, with current OSHA
dust level requirements and the speed of new production equipment, that same mill would need 45-55
AC/H. 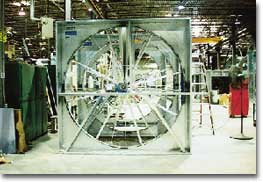 OSHA requirements now allow a maximum respirable dust concentration in most workplaces of 133
micrograms per cubic meter, Carr said.We have to look at several things in accomplishing our goals,
he continued. How you supply the air can be as important to quality and cleanliness as how you
remove waste.For example, Luwa Bahnsons LoomSphere® system, a patented system designed to provide
optimum humidification for the weave room, establishes and maintains an exact and constant
environment around each loom. A precise airflow is designed to bathe each loom in a tightly
controlled environment of cool, humid and clean air. The conditioned air flows through the entire
warp sheet and preconditions the warp beam. As the air flows through and around the loom, the yarn
is strengthened by the moisture gain while the dirt and fly are carried to the return air openings
on the floor, where they are removed.Carr said the LoomSphere system results in reduced energy
costs, reduced maintenance, less capital cost and, most importantly, clean and precisely controlled
conditions at the loom.The advantage to this system is that it is a gentle flow of air over the
process, Carr said. It doesnt create turbulence, which would stir up the fiber fly and dust.For
ambient air filtration in large, open spaces, Luwa Bahnson, like Pneumafil, has developed efficient
systems that occupy a fraction of the space needed by conventional drum filters.We have our Sonic
Micro Filter, which is ideal in installations where space is at a premium, said Carr. It requires
less room than a conventional drum- and panel-type filter, requires less pressure drop, or energy
usage, than roll-media filters and automatically cleans itself, which eliminates labor required to
change disposable roll media.The ambient air return in the Sonic Micro Filter is conducted axially
to the rotary filter screen. The proprietary filter mesh and flow rate velocity are selected in
accordance with the type of application. A layer of fiber and dust is built up on the fine-mesh
screen, which increases filtration efficiency. At a selected pressure drop, the filters are cleaned
until the pressure drop is lowered to a selected set point. The waste deposited on the filter
screen/media is removed by means of a near-sonic velocity impact air nozzle in conjunction with a
catching suction nozzle. The high mass flow/high impact air nozzle dislodges the waste to
regenerate the filter screen/media. 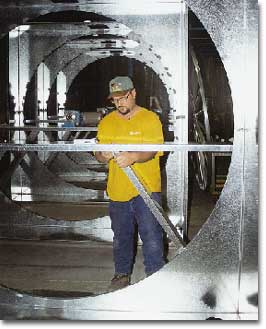 Luwa Bahnson, as well, manufactures an Air Bell system for circular knitting applications,
which the company claims can eliminate fiber defects by as much as 50 percent. The Air Bell system
controls the airflow volume, condition and pattern to optimize efficiency. The distribution of air
provided by the Air Bell system, Carr said, sufficiently prevents fluff from entering the bell. The
air current at the feed wheel is strong enough to transport any free-flying fibers that develop.
The fibers are then carried off. This method of control prevents fluff from returning to the
knitting machine.Pneumafils Everclean Rotary Pleated Belt Filter, also a patented filtration
system, combines high-capacity pleated-membrane media with high-efficiency suction cleaning, said
Stonestreet.The Everclean filter consists of a number of filter cells, he said. Each cell comprises
an endless pleated media belt looped between two pulleys. Unfiltered air enters the unit parallel
to the filter cells and passes through the straight sections of the belt loop. Larger fibers
collect on the outer edges of the pleats, and smaller particles build up on the media surfaces
between pleats. The clean air continues between the two sides of the cell into a plenum in back of
the filter and then exits. Pressure drop across the media is constantly monitored. When the high
set point is reached, a cells belt begins rotating around the pulleys, and a stationary suction
plenum underneath the cell is activated. As the belt moves around the lower pulley, the pleats open
up and airflow through the media is blocked, allowing the pleats to be vacuumed clean.We have been
notified by two recent clients that the installation of this filtration system has allowed them to
exceed the OSHA dust test for the first time in history, said Stonestreet. One installation was a
plant expansion, and the other was a retrofit of an existing application.The Everclean system is
designed for production areas from opening through spinning. For weave-room applications, Pneumafil
offers its Automatic Panel Filter (APF).The APF is a self-cleaning filter that installs in a
fraction of the time required for installation of space and conventional drum filters, Stonestreet
said. Air is cleaned as it flows through an arrangement of parallel, hollow filter cells, each
formed by two sets of filter panels. A pressure differential switch or timer activates the cleaning
mechanism, which travels in and out of the space between filter cells. A shuttle device moves the
cleaning mechanism from cell to cell and returns it to the starting position when a complete pass
of the filter panels is accomplished. Filter panels are always cleaned in the same sequence,
ensuring that dirtier cells are cleaned before those with less accumulation. Stripper nozzles
vacuum the filter media until proper pressure is restored. Waste is pneumatically carried to a
disposal unit.Both companies have brought to domestic and export market preassembled filtration
systems that offer substantially reduced engineering, labor and installation costs.The Luwa Bahnson
Insta-Filter, a complete primary and secondary filtration unit, is used as part of a complete air
engineering solution. Contaminated air flows horizontally through a baffle system to equalize and
straighten air flow. Next, the air flows through a Sonic Micro Filter or Rotary Pre-Filter to
remove lint. The Rotary Pre-Filter provides preliminary filtration of air streams heavily charged
with waste. Air then passes through a Luwa Bahnson Multi-Drum Vac® (MDV) filter to remove
microdust. The MDV provides filtration of fine particles. Both lint waste and microdust waste can
be automatically removed and compressed for easy handling.This is a very simple filtration system,
said Carr. It is ideal for export because it doesnt require a lot of engineering and installation
expertise on-site. By assembling much of the system before it is shipped, a lot of add-on costs are
eliminated.The Pneumafil Rotary Pleated Belt Filter is preassembled on a steel base and prewired,
including controls, Stonestreet said.Both Pneumafil and Luwa Bahnson provide primary and secondary
filtration systems, as does Industrial Air Inc., Greensboro, N.C.Industrial Air offers filtration
systems, ranging from integrated air systems to air washers, fiber and waste separators, custom
HVAC systems, as well as bag, drum and roll filters.Our main focus, as is that of the entire
industry, is to provide our customers with the most efficient means to meet OSHA dust standards,
said Allen Hunter, president, Industrial Air. We offer complete, turnkey solutions to make this
happen.Among the newest offerings from Industrial Air is the S Series drum filter, according to
Hunter. The S Series filter is constructed of perforated steel panels bolted together to form a
cylindrical horizontal rotating drum. The arrangement, Hunter said, allows even air distribution
across the fabric filtering media. When bolted together in multiple sections, these panels form a
rigid cylindrical truss member that eliminates the need for a continuous center support shaft,
which facilitates maintenance. The drum is cleaned by a series of vacuum nozzles located on the
outside of the cylinder, allowing convenient media inspection. Industrial Air has also introduced a
new Hi-Vac sleeve receiver that has 400 percent more screen area than standard 30-inch flat screen
receivers, Hunter said.Replacement media for many filtration systems are proprietary, according to
Pneumafils Stonestreet. However, one new venture, FiltersRx.com, a division of Lifetime Industries,
now makes replacement filters available through the Internet.For More InformationLuwa Bahnson3901
West Point Blvd.Winston-Salem, NC 27103(336) 760-3111
www.luwabahnson.com Pneumafil
Corporation4500 Chesapeake DriveP.O. Box 16348Charlotte, NC 28297(704) 399-7441
www.pneumafil.com Industrial Air
Inc.428 Edwardia DriveGreensboro, NC 27409(919) 292-1030