Cotton Economics Outlook For U.S. Cotton 1999
The National Cotton Council takes its annual look at the forces shaping the U.S. Cotton
Industry.
Editor's Note: This article is a compilation of excerpts taken from the National Cotton
Council's Report titled “The Economic Outlook For U.S. Cotton 1999” prepared by Mark Lang,
Director of Economic Services; Kent Lanclos, Agricultural Economist; Kevin Brinkley, Agricultural
Economist; and Deborah Vivien, Agricultural Economist. We begin the last year of the
millennium having just experienced an extraordinary year of extremes. Events in the past year bring
more than the usual degree of apprehension regarding prospects for the year ahead.The year 1998
held some of the greatest variations in recent times for exchange rates, stock exchange values,
commodity prices and weather. These movements obviously have a direct bearing on the economic
prosperity and security of most enterprises, especially those involved with cotton.  U.S. Net
Farm IncomePlunging commodity prices have resulted in a $5.4 billion decline in U.S. net farm
income since the recent record level of $53.4 billion in 1996. U.S. net farm income estimated for
1998 is 11-percent below net farm income of 1996. The basic components of net farm income are
revenue from marketings and direct government payments. In 1996, marketings accounted for $46.1
billion and government payments were $7.3 billion. USDA estimates marketings in 1998 at just $35.1
billion, down $11 billion from just two years ago.A dramatic increase in government payments of up
to $12.9 billion for 1998 prevented a total disaster to net farm income. The 1998 agricultural
disaster assistance legislation added $4 billion to 1998 government payments and $2 billion to
expected government payments for 1999. 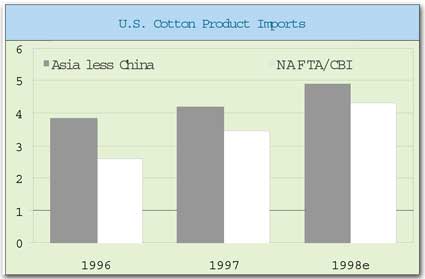 Stock LevelsUSDA currently projects U.S. ending cotton stocks for 1998 of 3.20 million
bales, a decline of about 700,000 bales from the stock levels of the two previous years.However, it
appears that ending stocks could actually be in the range of 3.90 million bales, given the growing
weakness in domestic and export demand and a crop that has proved larger than harvest-time
expectations.With current levels of offtake and ending stocks of 3.20 million bales, the ending
stocks-to-use ratio (SUR) for 1998 would be 21.6 percent, slightly above the 20.6 percent recorded
for 1997. With 3.90 million bales of ending stocks and somewhat lower levels of offtake, the ending
SUR could end up around 27 percent.When cotton prices were strong during the 1994 and 1995 crop
years, the corresponding SURs were 12.9 percent and 14.2 percent (inclusive of imports),
respectively. Summing beginning stocks, production and projected imports for the 1998 marketing
year gives a total supply of 18.03 million bales, down from 22.78 million in 1997.This marks the
smallest available supply since 1985 when total supply was 17.57 million bales. Over the past five
years, total supply has averaged 21.94 million bales.U.S. Cotton Mill Use Million Bales 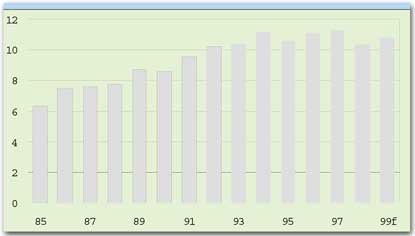