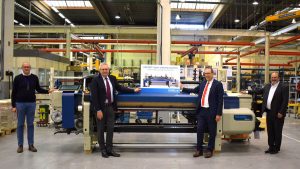 Picanol has an extensive track record in the production of high-tech rapier machines. In 1975, it launched its very first weaving machine with a rapier insertion, which was named the PGW. Since the launch of the first rapier machine all that time ago, Picanol has introduced various new generations of rapier machines. These include, among other machines, the GTM in 1983, the Gamma in 1996, the GamMax in 2002, and the OptiMax and the GT-Max in 2007. Its current flagship rapier weaving machines — the OptiMax-i launched in 2015, and the GTMax-i 3.0 launched in 2018 — cover a complete range of applications.

“The fact that the 100,000th machine mark has been reached now represents a sign of hope and optimism during this COVID-19 time,” said Johan Verstraete, vice president, Weaving Machines. “Our people are working hard to build, install and service weaving machines, even under these extraordinary circumstances — and this is taking place while simultaneously respecting all of the measures needed to ensure safe and healthy working conditions. We have every reason to be proud of the fact that we have produced 100,000 rapier weaving machines and we are extremely grateful to all of our employees who have made this possible. Achieving this milestone once again demonstrates our ability to produce best-in-class, dedicated weaving machines for the world’s most reputable textile manufacturers. In addition, this is further proof of the confidence that our customers have in the Picanol brand, its quality and its rapier technology. By working in close cooperation with our customers, even in these challenging times, we will grow together!”