WASHINGTON — June 18, 2013 — U.S. Acting Secretary of Commerce Rebecca Blank presented Argus Fire
Control of Charlotte, North Carolina with the President’s “E” Award for Exports at a ceremony in
Washington, D.C. held on May 20, 2013. The “E” Awards are the highest recognition any U.S. entity
may receive for making a significant contribution to the expansion of U.S. exports.

In Washington to receive the award were President Michael P. Viniconis and Chairman Robert A.
Duncan. “Exports of our high speed automatic fire protection systems have been steadily increasing
for the past 4 years, and international sales now account for more than 80% of our total revenue”
says Viniconis. “Our industrial fire protection systems are in demand around the world, and we
continue to grow to meet this demand”, he added.

“I am delighted to be recognizing this year’s Presidential ‘E’ Award winners for their
outstanding contributions to U.S. exports and congratulate Argus Fire Control on its outstanding
export achievement,” said Acting Secretary Blank. “It is businesses like Argus that are
strengthening the economies of local communities, creating jobs, and contributing to the worldwide
demand for ‘Made in the USA’ goods and services.” 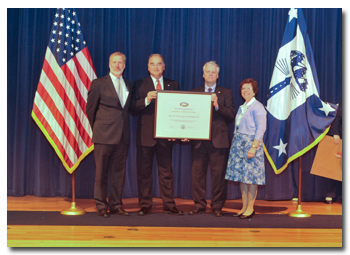 Argus Fire Control specializes in designing, manufacturing and installing high speed fire
protection and metal detection systems for the textile and non-wovens industry around the world. In
the early years Argus focused on selling to the textile industry in the US, and in the1990’s
expanded to more than 50 countries around the world to service its growing global customer base.

U.S. exports hit an all-time record of $2.2 trillion in 2012, and supported nearly 10 million
American jobs. President Obama’s National Export Initiative, which aims to double U.S.exports by
the end of 2014 and support an additional 2 million jobs in the United States, is opening new
avenues for U.S. exporters through enhanced export assistance and a strengthened trade agenda that
is targeting emerging markets and industry sectors across the globe.

President Kennedy revived the World War II “E” symbol of excellence to honor and provide
recognition to America’s exporters. The “E” Award Program was established by Executive Order10978
on December 5, 1961. A total of 57 U.S. companies were presented with the President’s”E” Award this
year.

U.S. companies are nominated for the “E” Award for Exports through the Department of
Commerce’s U.S. and Foreign Commercial Service office network, located within the Department’s
International Trade Administration, which has offices in 108 U.S. cities and more than 70 countries
to help U.S. exporters. Four years of successive export growth and an applicant’s demonstration of
an innovative international marketing plan that led to the increase in exports is a significant
factor in making the award.