Reproductions of textiles originally covering the walls of the Raphael Room at the Isabella Stewart Gardner Museum have been installed to restore the gallery to its circa-1924 appearance.

Over several decades, extensive work has gone into restoring the galleries of the Isabella Stewart Gardner Museum in Boston to their look at the time of Gardner’s death in 1924. The museum, built in the style of a 15th-century Venetian palace, opened in 1903 to house her extensive collection of paintings, sculptures, textiles, furniture and other items collected around the world and created over a 30-century span. Three floors of exhibition space in light-filled galleries are arranged around an interior courtyard garden.

In the Raphael Room on the second floor, textiles covering the walls and upholstered furniture are a major part of the restoration, which is nearly complete. Gardner had collected a number of 17th- and 18th-century Italian and Spanish silk damask and velvet fabrics, and she used 18 damasks and two velvets to cover the walls in that room, piecing them together in a patchwork-like way. The original fabrics were replaced in the 1950s, and now, those newer fabrics, sagging and faded after 60 years, have been replaced with reproductions of the original fabrics.

The Gardner archives had only a few original fabrics, so Tess Fredette, senior textile conservator at the museum, and her team researched 1926-era photographs of the room and archives from other museums. She then worked with a designer, weaving technician and others at commision silk weaver Prelle et Cie, Lyon, France, to execute the reproduction of each fabric. “I was able to sit with the woman who designed the patterns on the CAD system and talk to the weaver to decide what looms to use to weave the fabric, and decide how best to do that in a very cost-effective way,” she said.

The original fabrics were various shades of red. “Chances are that in the late 17th-early 18th century the palette for red was fairly tight, but except for the few samples that we had, we really didn’t know the shades of red,” Fredette said. “They were basically a burgundy or bordeaux kind of red, so we came up with a color scheme, making the palette tight but having the fabrics look slightly different by choosing two different-colored warps and two different-colored wefts. We also had two different weft yarns, one a bombyx silk and the other a tussah silk, so just with those four dyes and two yarn types, we were able to create a little variety within this small, tight palette.”

For the Raphael Room, Prelle set up two Dornier electronic looms with the two warps to weave all the damask patterns, and another loom to weave the velvets. In all, 300 yards of fabric were woven.

In addition to the fabrics reproduced by Prelle, there are other fabrics that museum staff replicated in-house. Textile conservator Elsbeth Dijxhoorn re-created bands of linen embroidered with silk chenille emulating tasseled fringe to use on three velvet-covered stools in the room. The chenille was dyed to match the original colors found in a seam on the original bands. 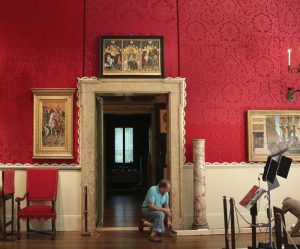 Also, Fredette speculates that some of the original velvets on the walls had once had floral appliqués on them, but not when Gardner collected them. Where appliqués had fallen off, the tight stitching that had been used to attach them had left impressions on the fabric. “So to emulate the floral impressions left by missing appliqués, we had the new velvets embossed in-house,” Fredette said. The rubber embossing stamps were hand-carved by fiber artist Emma Welty.

Fredette and her team worked with Bruno Jouenne, owner of Soft Walls Associates in Boston, to assemble the various wall fabrics and trims and install them on the walls of the gallery. “It appears that the original fabrics were sewn together,” Fredette said. “I had it mapped out on paper and compared it to historical photos. Because everything was so pieced, we would cut the fabric, hang it on the wall piece by piece, and step back and look. Then, each piece was taken down, and it was all seamed together to make a big cloth the size of the wall. Then it was reinstalled on the walls, just tensioning around the perimeter.”

All of the fabrics are 100-percent silk, so to satisfy Boston’s fire codes, the museum lined the walls with Velos II flame-retardant Trevira CS polyester napped velour fabric produced by Création Baumann, Switzerland. The Velos II was hung upside down to take advantage of the nap angle as a means to hold the silk fabrics in place and mitigate their sagging over time.