Spider silk has been the subject of advanced research and development efforts for years because it has exceptional strength, elasticity and abrasion resistance, as well as numerous potential technical textile applications — if only it could be produced in commercially viable quantities. That’s been a problem because spiders are not exactly social creatures and, in fact, tend to be cannibalistic, so farming them as one would silkworms is not an option. However, a breakthrough has
occurred thanks to collaboration involving the University of Notre Dame, Notre Dame, Ind.; Kraig Biocraft Laboratories Inc. (Kraig Labs), Lansing, Mich.; and the University of Wyoming, Laramie, Wyo.; and the first result — a hybrid silk produced by transgenic silkworms — is well on its way to commercialization primarily for traditional silk applications including apparel and medical applications such as sutures. 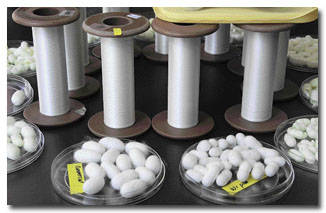 Armed with an exclusive license to use patented technologies developed by Randolph Lewis at the University of Wyoming, Kraig Labs Founder and CEO Kim Thompson began working with Malcolm Fraser at Notre Dame, developer of piggyBac gene-splicing technology, and Donald Jarvis at the University of Wyoming. PiggyBac vectors have been used to combine certain spider silk proteins with silkworm proteins to create a transgenic silkworm that produces a composite silk that, while it
comprises only about 5-percent spider silk protein, exhibits significantly increased strength and elasticity when compared to conventional silk. This hybrid silk is called Monster Silk, “a beautiful product,” Thompson said, that has an entirely different hue and sheen than traditional
silk. “The percentage of spider silk proteins in the fiber is not indicative of the fiber’s strength,” he said. “Those proteins are acting sort of like rebar in concrete, to create a reinforced fiber.”

Monster Silk can be produced in commercially viable volumes, and Kraig Labs, which has signed a commercialization agreement with Notre Dame, is exploring the possibility of acquiring an end-product manufacturer working in its target market.

A Generation II 100-percent recombinant spider silk for technical textile applications is in advanced stages of development and soon is expected to be ready for commercialization. This fiber, developed using St. Louis-based Sigma-Aldrich Corp.’s zinc finger gene-splicing technology, would
have advanced medical, composite and possibly ballistic applications, among others — spider silk is said to be stronger than aramid and 10 times as strong as steel. “I would like to see testing data before we make ballistic claims,” Thompson said, “but there is discussion in the scientific literature that this material would be like a miracle product for ballistic resistance. I imagine it would be used in a composite product to reinforce, for example, ultra-high molecular weight polyethylene.”

A customizable Generation III fiber that can include various mechanical and chemical properties is also in development.