Researchers at Ithaca, N.Y.-based Cornell University are using nanotechnology to develop fabrics incorporating metal-organic framework molecules (MOFs) that will selectively capture gases
such as chemical warfare agents and toxic industrial chemicals, providing a filtration system that can help protect military personnel, first responders and others at high risk for exposure to such
substances.MOFs — crystalline porous compounds that can be customized via nanolevel manipulation to trap specific gases — were developed in the late 1990s by Dr. Omar M. Yaghi, a professor in the Department of Chemistry & Biochemistry at the University of California, Los Angeles (UCLA). In 2008, with support from a grant funded by the U.S. Defense Threat Reduction Agency of the U.S. Department of Defense (DoD), Dr. Juan Hinestroza, associate professor of fiber science in the
Department of Fiber Science and Apparel, College of Human Ecology, and director of the Textiles Nanotechnology Laboratory at Cornell, initiated a collaboration with Yaghi’s research group at UCLA
to study how MOFs could be incorporated into polymeric nanofibers to trap noxious gases and break them down into less harmful substances and further decontaminate them. As part of the project, Fiber Science postdoctoral researcher Marcia Da Silva Pinto developed the first MOF fabrics in Hinestroza’s lab. 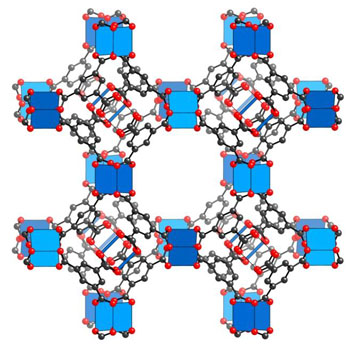 Metal-organic framework molecules are crystalline porous compounds that can be customized via
nanolevel manipulation to trap specific gases. When incorporated into a fabric, they are covalently
bound onto the fiber, using the chemistry of the fiber surface as a support scaffold on which to
build the cages.

“DoD asked us to investigate and incorporate the MOF molecules onto a fiber because fibers are much easier to manufacture than other materials and can be deployed as filters and clothing,” Hinestroza said, noting that there were initial difficulties in anchoring the powder-like molecules onto the fiber. “Finally, working with UCLA, we were able to make the breakthrough using the fibers as scaffolds on which to build the MOF molecules. That breakthrough allowed us to grow all kinds of
MOFs to specifically target all kinds of gases. The beauty of these molecules is that you can control the size of the cage inside the molecule with angstrom precision (1 angstrom is 1/10 of a
nanometer), and the frameworks can be tuned to capture different gases. Now that we can anchor them onto a fiber, we can produce filtration media, respirators, clothing and many other fiber-based
items such as tents and uniforms. The MOFs we used are covalently bonded onto the fiber, and use the chemistry of the fiber surface as a supporting scaffold on which to build the molecular cages,” he added. Cornell has filed a patent disclosing the procedure in detail.

While at this time only a few specific MOFs are being incorporated into a particular fabric, Hinestroza said a method is under development to incorporate several different MOFs into a single fabric, which could be woven, knitted or nonwoven. “We are developing a method by which we put a mask on the fabric, coat the fabric with one MOF, then move the mask and coat with a second kind of MOF, and then mask again, and so on, with up to four different MOFs. So far we’ve done three. We
want to prove the concept first, and then it will be simply copy and paste, hence creating a fabric capable of capturing and decomposing several gases simultaneously,” he explained.

The research has been conducted using gases such as nitrogen, ammonia and methane, which are
relatively safe for experimental work, but behave similarly to more dangerous substances such as
mustard gas. The final work to determine the performance would be conducted by the military or the
organization that has possession of the toxic substances. 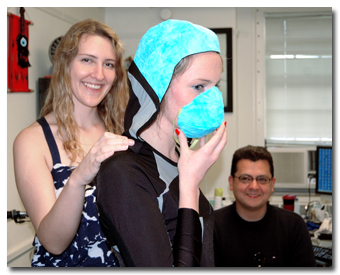 The first fabrics to be developed were cotton, but polyamides and polyolefins have also been produced. “We work mostly with cellulose fibers because they have a lot of flexibility in terms of chemistry,” Hinestroza explained. “One student is also working with polyolefins, and we also can work with polyamide. After two years of trials, we have converted the surface of polyolefins and polyamides to something that would look like cellulose. We are using modified plasma technology to
modify only the top 5 nanometers of the fiber’s surface. We embedded the surface with chemical groups that would be amenable to the MOF scaffolding, while maintaining the mechanical stretch and reproducibility of polyolefin and polyamide manufacturing.”

Hinestroza noted that incorporating MOFs into a cotton fabric does not affect the natural characteristics of a fiber, except for the color. “It’s still 99.999-percent cotton and still feels, drapes and smells like cotton,” he said. However, the fabric does take on the color imparted
by the particular metal in the framework, as is seen in the photograph showing a turquoise gas-trapping hood and mask designed by Jennifer Keane, a Cornell fiber science and apparel design major who used a cotton MOF fabric colored by copper in the framework.

“We also have red and green colors produced by other metals. It all depends on the ion we use for the metal,” Hinestroza said, noting other possible metals including molybdenum, ruthenium, platinum, silver and gold. “Each has its own characteristic color. We can also do structural
coloration, using the colors of the different MOFs instead of dyes to create colors that do not fade as they are physical colors,” he added.

For more information about MOF fabrics and the research being conducted at Cornell, contact Dr. Juan Hinestroza +607-255-7600;
jh433@cornell.edu.