Vectran®, a high-performance multifilament polyarylate fiber melt-spun from liquid crystal polymer, is manufactured by Kuraray America Inc., Fort Mill, S.C., a subsidiary of Kuraray Co. Ltd., Tokyo. The fiber’s high strength; low elongation and excellent creep resistance; high
abrasion, cut, chemical and impact resistance; excellent flex fatigue resistance; and other properties make it suitable for applications such as high-performance rope and cable, inflatables, puncture-resistant materials and electromechanical products. Its stature received a big boost after it was selected to be used in the airbags that cushioned the Mars Pathfinder’s landing on the Red Planet in 1997, according to Bob Knudsen, manager, sales and marketing, for Kuraray America’s Vectran Division. It also is used in various other aerospace applications. 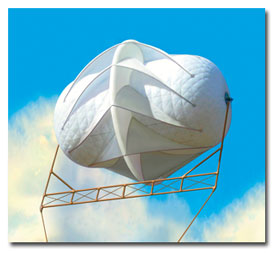 The Magenn Air Rotor System (MARS) can be used to generate electrical power from wind
anywhere on the planet.

One of Vectran’s newest airborne applications is much closer to earth in Canada-based Magenn Power Inc.’s Magenn Air Rotor System (MARS), which can be deployed anywhere on the planet to generate electrical power using the steady winds up to 1,000 feet above the earth’s surface. MARS comprises a huge, helium-filled balloon-like structure carrying two generators connected to a ground station via a tether system containing a Vectran core with copper spiraled around it to
conduct electricity to the transformer for transfer to a power grid. Vectran fabric also covers the balloon.

Covington, Ky.-based braided textile manufacturer Atkins & Pearce Inc. (A&P) developed the tether system, which presented some major design challenges. “Beyond the need to get the electricity back to earth and hold the balloon in place, there weren’t a lot of guidelines in terms of what to use or other specs,” said Jeramie Lawson, director of new product development.

The system includes two tethers connected to the two generators and joining at a Y-shaped fitting, which joins a third tether that connects to the power grid. Each tether – containing 540 ends of 1,500-denier Vectran laid under equal tension inside a copper “slinky,” as Lawson described it, all covered by a braided jacket coated with a weather- and ultraviolet-protective polymer – is epoxy-bonded to the fitting, and the conductive wires are tied together to transmit the electricity. The system carries a tensile load of 10 tons, is light enough to be lifted by the helium in the balloon and has very little elongation. 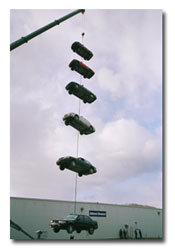 To test the tether’s performance, A&P strung up six automobiles on a single tether and hoisted them into the air with the help of a crane. The tether bore the weight of all six cars and provided power to run their headlights. By comparison, a steel tether snapped under
the weight of three cars.

MARS is targeted for release in 2011 to serve remote areas that cannot use traditional wind
turbines and/or that use diesel generators for power needs. Magenn Chief Marketing Officer Mac Brown said the balloon will measure 50 feet in diameter by 120 feet in length, and the system will generate 100 kilowatts of electricity – enough to power a small village in India, Africa or China.