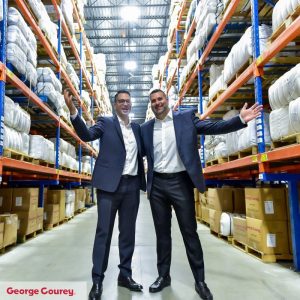 LAVAL, Quebec — September 23, 2022 — George Courey Inc., a 112-year-old business, owned by the same family for four generations, has undergone a successful transition from the third to the fourth generation. Taking a century-old business into the future requires a business acumen and maturity of leadership which Jeffrey Courey and Robert Courey bring to the table.

On September 15, 2022, the George Courey Inc. headquartered in Laval hosted the transition ceremony, in the presence of representatives from the House of Commons, clients and employees. Mindful of the wealth of experience Jeffrey Courey accumulated in the company as COO for 7 years, he was promoted to the role of president and CEO in January 2020. Robert Courey, who served for 16 years as the director of Business Development became the Vice President in May 2022.

Against the shifting sands of uncertainties induced by the Covid 19 pandemic and the high demand for limited supplies of personal protective equipment, George Courey Inc. never wavered in its mission to actively support governments in bringing much needed relief to hospitals and care homes. George Courey Inc. is currently known as a leader in North America’s linen and textile production and distribution. Inching closer to the creation of new warehouses in different locations across Canada and the United States is the next milestone unfolding.

Articulated by Jeffery Courey as “the passing of the torch to a new generation of Coureys, well-positioned to steward this company into the next century through our focus on People, Planet and Progress.” This will partly entail in his own words “continued success in the growing USA market while promoting reusable textiles across multiple sectors, offering our clients outstanding value, sustainable product innovation and an unparalleled customer experience.”

With Jeffrey and Robert at the helm, the company’s reputation as one of North America’s most reliable and respected linen and textile providers will continue to grow.