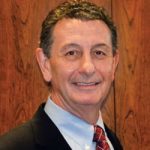 His long career in the industry began at Milliken & Company where he progressed from a management trainee to plant manager to director of manufacturing. After leaving Milliken, Gorga joined CMI Industries as president of its Elastic Fabrics of America and Finished Fabrics divisions. He later became chairman and CEO of CMI. In 2002, he joined Burlington Industries as executive vice president, North American Operations. Gorga was named president, CEO and member of the Board of Directors of the International Textile Group from its inception in 2004, where he remained until his retirement in 2014.

His contributions to the industry were many. During his career, Gorga was involved with the American Textile Manufacturing Institute, National Textile Association and National Council of Textile Organizations.

“Joe was a friend to us all and a great presence and leader in our industry worldwide,” said Kenneth Kunberger, president and CEO, ITG. “Joe’s leadership and integrity set a foundation in the company that continues today. He will be sorely missed, both personally and professionally.”

Olivier Janin has joined the Netherlands-based DSM as vice president of marketing and sales, DSM Dyneema.