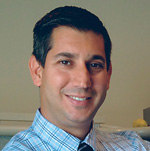 Nextremity Solutions Inc., Warsaw, Ind., has named Nick A. Deeter CEO and chairman of the Board of Directors.

Bozeman, Mont.-based TexBase has added Donny Askin to its Board of Directors.