The Textile Museum, Washington, D.C., has elected
Paul N. Schwartz to the Board of Trustees.

Wilmington, Del.-based
DuPont has elected
Samuel Bodman to its Board of Directors.

Dr. Stefan Mecheels, Hohenstein Institute, has been named vice president of the
Executive Committee of the
RAL German Institute for Quality Assurance and Certification. 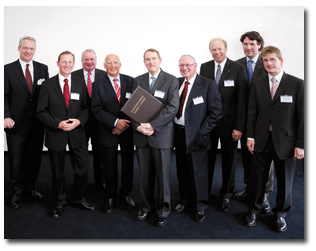