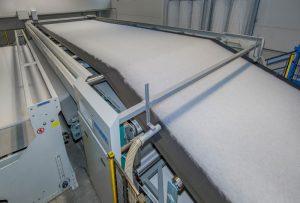 GRAZ, Austria — May 3, 2022 — International technology group ANDRITZ has received an order from Italy-based Manifattura Fontana, part of Sioen Group, to supply a complete neXline needlepunch line for the production of geotextiles to its site in Romano d’Ezzelino, Italy. Start-up of the line is planned for the fourth quarter of 2022.

The Andritz needlepunch line will cover all process steps from fiber opening to automatic packaging of the product. The line will also include the latest ProWin profiling technology to enhance web weight evenness on cards and crosslappers. Another important feature is waterproof roll packaging, which is increasingly in demand on the market. Thus, Manifattura Fontana will be one of the very few players in the world to deliver fabric rolls with waterproof protection.

This will be the second line in only three years to be supplied by Andritz to Manifattura Fontana, which is one of the fastest growing geotextiles producers in Europe and well known for the high quality of its products as well as its customer focus.

The customer trusted once again in Andritz thanks to the success story of the first production line. Orwig Speltdoorn, head of the Nonwovens Division of the Sioen group, said: “Operating the Andritz line turned out to be a great success because of the excellent cooperation between our two companies. The follow-up on progress and training by the ANDRITZ technicians quickly put our operators at ease with the new technology. With the second line, we are confident that the plant will become the most productive and cost-efficient unit, producing geotextile nonwoven fabrics of the highest quality standards.”

Manifattura Fontana is part of the Belgium-based technical textile group Sioen Industries. The company provides its customers with added-value geotextiles for many applications, such as the construction of roads, railways, reservoirs, dams, and tunnels, as well as for earthworks, foundations, erosion control, drainage, waste disposal, or containment. The company belongs to the Belgian Sioen Industries Group, a leading producer of technical textiles in the global market with an annual turnover of more than 600 million euros and around 4,500 employees in plants located in 15 countries.