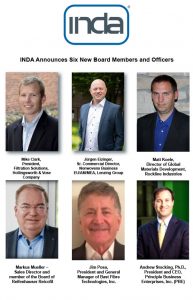 CARY, N.C. — March 7, 2022 — INDA, the Association of the Nonwoven Fabrics Industry, today announced six new board members and its 2022 slate of officers to guide the success of the nonwovens industry and its members.

Elected by the INDA membership to three-year terms that began on March 1, the new board members bring a high level of diverse expertise and insight to the management of the association as it moves forward with its vibrant growth.

“I am delighted to welcome such a strong group of new board members who bring deep industry knowledge and insights to provide strategic stewardship for our association,” said Dave Rousse, INDA president. “We look forward to working with them to advance INDA’s new value proposition to enhance our industry’s leadership position and deliver greater value to our members.”

The new board members are:

Chris Astley, senior vice president and chief commercial officer, Glatfelter, has concluded his two-year term as INDA board chair and normally would continue as an INDA Officer in the position of past chair.

However, since Glatfelter acquired Jacob Holm and INDA Bylaws allow only one Board member per company, Astley is stepping down, allowing Warner to continue as an INDA Officer on the Board and to assume the role of chair in two years.

The 21-member board is comprised of elected Board Officers. One-third of the entire Board is elected each year for a three-year term by a majority vote of INDA’s general membership. INDA’s Executive Committee, empowered to act on behalf of the Board between meetings, consists of the Board Officers plus four appointees.

Source: INDA, the Association of the Nonwoven Fabrics Industry