At first blush, the provocative headline — “4 Smart Textiles You’ve Yet to See” — in a recent issue
of Popular Science seems out of place. The article predicts what it deems are the textiles to watch
for in the near future — self-repairing fabric, water-soluble fabric, environmentally responsive
fabric that shifts shape or changes color in response to temperature, and “bio-leather” — all meant
to inspire fashion designers. Indeed, high fashion is grabbing its share of headlines these days.

As Textile World has previously reported, designers of fashion and products for wellbeing are
being inspired by new textile developments, and many designers are taking advantage of new textile
capabilities and applying them to new medical and other end-use applications. Although architecture
tends to follow trends rather than lead, it is starting to adopt some of the advanced developments
in textiles first used by fashion designers. 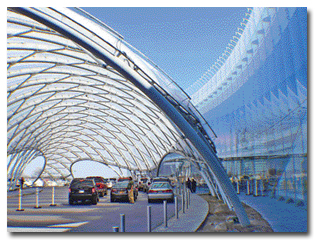 
Most new material innovations in architectural construction come from outside the industry.
For example, the mid-20th century development of the now-ubiquitous glass curtain wall was
influenced by the automobile industry’s perfection of neoprene window seals for windshields. This
new technology found its modernist ideal in Eero Saarinen’s design of the General Motors Technical
Center — built in Warren, Mich., in 1955 -where he applied neoprene to the center’s glazing façade
system.

More recently, the adaptation of ethylene tetrafluoroethylene (ETFE) — first used as an
insulator for electronics applications — to architectural use has opened many new possibilities for
building design and function, most notably seen in the 2008 Beijing Olympics water sports venue.

Today, architecture is no less beholden to new technologies. In truth, they have always been
the drivers of both new design and better construction as improvements in material performance and
construction methods are made in response to economic as well as environmental demands, such as
increased sustainability and energy efficiency standards. New textiles are playing a growing role
in innovative architecture and construction.

There are several research areas in which textile innovation is beginning to influence
architectural design, including medical, military and fashion textiles. Another major influence is
not so much a research area, but a social trend — the increasingly mobile nature of business,
culture and daily activity.


Many developments in the medical device market have parallel developments in the construction
and architecture design markets, such as textiles that are able to sense and react to environmental
conditions (See “Medical Textiles: How Smart Do They Have To Be?,” TW, November/December 2012).
Architects are finding practical use of fabric coatings that help to fight bacteria or reduce
pollutants in the air — such as titanium dioxide (TiO2) — by applying them in healthcare facility
and clinic designs in which these specialized textiles are used to provide enclosures or
partitions. Healthcare worker apparel can be treated with the same antibacterial/antipollution
finish. Ongoing research in this area will yield many new possibilities, and it is expected to be
the most fertile field of interest for architecture and construction.


Following a trend that began 150 years ago during the American Civil War — which saw the
production of lightweight, portable fabric camp furniture and tents — military research into
materials and performance characteristics continues to drive innovation on the architectural front.
A short list of recent innovations includes flexible photovoltaics (PV), low-pressure fabric
airbeams, and non-radiant fabrics that render military tents or deployable structures invisible to
an infrared heat signature. 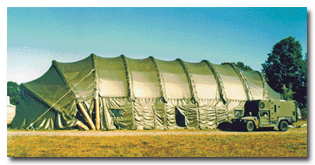 
New material developments regularly find a willing partner in couture, as the fashion media
are very adept at publicizing anything new, and designers are in constant need of fresh ideas. For
example, in recent years, fashionistas have embraced the use of “smart textiles,” including
textiles that can carry data as well as lumens — electrotextiles that display a message or colorful
pattern — or textiles that feature high-performance capabilities for combating specific biological
problems (See “French Technical Textiles Industry: Futurotextiles 3: Nexus Of Technology And Art,”
TextileWorld.com, March/April 2013). 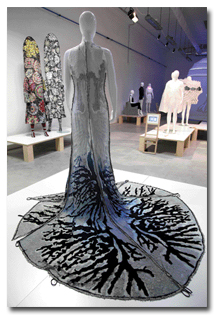 A coating of TiO2 on the fabric of the Herself Dress, created by British fashion designer
Helen Storey, works to break down pollution and freshen the air. Photo courtesy of Maxime
Dufour

Society On The Go


New mobility is driving the need for lighter-weight materials and the demand for more
data-metric information about the environments that people move through. New methods of collecting
and transmitting the data are coming online and will help both the designers of spaces as well as
the users of the spaces in ways that bring greater understanding. For example, the French company
Bodysens S.A.S. has developed a protective hood for firefighters with sensors in the lining that
measure heart rate and other vital signs of the user, and that allows hands-free communication via
digital radio transmission between user and colleagues. Another promising technology involves
chromographic textiles that change color in response to temperature changes. This textile
technology could very well be adapted to the design of medical facilities in which close monitoring
of the environment may be critical and a visual reference to fluctuations may assist doctors and
technicians with treatments.

Lighter, more mobile buildings will be necessary as rapidly shifting public gatherings and
dynamic groups like meetups, impromptu performances and such will require flexible, dynamic spaces.
Pop-up stores will be possible because of durable, lighter-weight materials that provide protection
and colorful, customized graphics.


Another area to watch would be composites. As with air and transportation applications,
composites are going to see increased importance in construction as designers seek greater
performance characteristics at lighter and lighter weights to reduce the building carbon footprint.
High performance and extreme light weight are, increasingly, qualities that can only be attained
with the use of textiles.