D
iloGroup, Germany, is a global leader in the manufacture of complete nonwovens production
lines. In an exclusive interview with

Textile World
, Owner and Chairman Johann-Philipp Dilo explains the company’s situation after the
industry’s slump in 2008 and 2009. He also reflects on some trends in nonwovens products for the
near future and offers his thoughts on ITMA 2011 in Barcelona, Spain.

As the former chairman of The German Engineering Federation (VDMA) Textile Machinery
Association, which hosted ITMA 2007 in Munich, Germany, Dilo is the right person to talk about
ITMA’s future in Europe or in Asia. As a European textile machinery manufacturer, and a true
entrepreneur with his own company, he is a man with a clear view. He is also the right person to
talk to about the future of nonwovens.

TW
:
How do you judge the general economic situation compared to 2009?

Dilo: At least since the second quarter of 2010, the general economic development
at DiloGroup has been positive, with a steep rise in incoming orders and turnovers.

TW
:
How do you see the current economic situation for nonwovens?

Dilo: The positive development is also valid for the nonwovens sector. However, in
any case, it makes sense to consider the different sectors one by one. 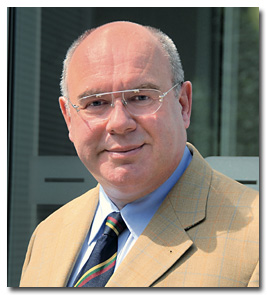 Johann-Philipp Dilo, owner and chairman, DiloGroup, notes there has been a steep increase in
incoming orders and turnovers since the second quarter of 2010, both in the general economy and in
the nonwovens sector.

TW
:
Has the economic situation for DiloGroup changed compared to 2009?

Dilo: For DiloGroup, for some six months, a quick increase of incoming orders has
been recorded, with the consequence that the turnover will increase considerably this year.

TW
:
Which world regions are in the forefront in terms of Dilo’s turnover?

Dilo: By all means, Asia, with strong emphasis on China. Nevertheless, the
recovery is taking place worldwide. This also applies to nonwovens in the United States. The main
market in South America — Brazil — was less influenced by the financial crisis.

TW
:
Are there regions that have not recovered yet?

Dilo: Yes, in Western Europe, the investment situation is still held up by the
financial crisis, which is not yet over completely. Fortunately, Germany is showing very strong
recovery.

TW
:
Which of Dilo’s machinery products are in greatest demand today?

Dilo: In a nutshell, one can notice high demand for staple-fiber web formation by
needlepunching and hydroentanglement. As one knows, there was an annual growth of some 6 to 7
percent for needlepunched products before the crisis started in the fourth quarter of 2008. This
positive trend is now seen again, particularly for technical products in the automotive,
geotextiles and filtration areas.

For hydroentanglement, there are cards with a wide working width of more than 5 meters and
high-speed throughput of more than 300 meters per minute. For this sector, DiloGroup is enjoying a
particularly high number of incoming orders -which are not just concentrated in Asia — including
systems starting at fiber preparation with opening and blending, high-value card-feeding and
carding systems for maximum throughput and fabric evenness.

TW
:
What are the main reasons for this positive trend?

Dilo: At present, there are state programs for infrastructure provision in many
countries, so the geotextiles sector also profits from these programs. And in China, the importance
of sufficient environmental protection is recognized favorably, so the filtration sector has become
very important. A strong upswing also has occurred in the automotive sector.

In numerous fast-developing nations, economic development is indicated by the increasing
spending power of the so-called middle class. This strongly influences the hygiene, cosmetics and
medicine sectors, where bonding by hydroentanglement has its domain and where we think DiloGroup is
technically and technologically in a leading position with its preparation and web-formation
processes.

TW
:
DiloGroup maintains a large and well-equipped application technology facility. How important is
this for your customer relations?

Dilo: This is very important. Any textile enterprise that is faced with a decision
to make a large production plant investment tries to minimize its investment risk. Our technology
center can help to define the throughput performance, nonwovens quality and machine efficiency. So
in this respect, our application trials are the foundation for the quality of customer relations;
and, therefore, they are continuously being conducted as we are mainly working in the investment
business. 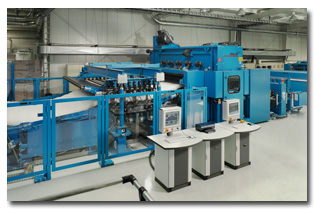 TW
:
How satisfied were you with the outcome of ITMA Asia 2010?

Dilo: ITMA Asia in Shanghai is very well-established and appreciated as an
important event for Asia. Dilo can also support very well its project-related work by participation
in this exhibition. In this respect, we are very satisfied with the results of the ITMA Asia 2010.

TW
:
Can you protect your products in Asia?

Dilo: There is a main emphasis within DiloGroup in the field of research and
development works, which frequently lead in inventions and are accompanied by patent applications
in all important markets. We have therefore shifted to holding Chinese patent applications too,
because we think that by now, a well-operating patent culture is established that is working
according to the European system.

TW
:
How do you judge the fact that in two years, another ITMA Asia will take place?

Dilo: The Chinese market is characterized by high dynamics. Therefore, it can make
sense to arrange an exhibition of this kind in a shorter rotation — at least in the near future. In
this context, it must be recognized that ITMA Asia at present is still holding to a different
direction compared to ITMA in Europe. ITMA Asia is seen by many — and also by DiloGroup — to
support sales efforts directly and concretely as a so-called operational fair. In this respect,
there is hardly any significant representation of some of the latest developments of Western
manufacturers in the area of nonwovens machinery. Exceptions may confirm the rule. On the other
hand, the European ITMA, if one takes a look at its main targets, wants to offer exactly this
platform for innovations. Of course, there are overlaps.

TW
:
Do you find it acceptable that with the current rhythm since 2010 and ITMA Europe in 2011, an
ITMA will take place three years in a row?

Dilo: Well, one has to take into consideration that because of the geographical
distance, up to now, not many Chinese visitors but also relatively few Chinese exhibitors are
taking part in the European ITMA. Therefore — at least at present — one can imagine that it makes
sense to maintain the current frequency of both events. However, for the future, the target should
be that there will be an ITMA either in Asia or Europe every two years.

Dilo: Currently, the high amount of incoming orders continues for the first six
months of 2011. However, the good order backlogs will partly be completed only next year, so there
are good reasons for continued optimism for the year 2011.

As already mentioned, needlepunch bonding has a bright future thanks to our mature
technology in the areas of fiber preparation, web formation and bonding, because virtually every
fiber type — natural, man-made, mineral and even metal fibers — are processable. This gives the
positive result that most different products and applications already exist for nonwovens; and it
is fueled by a continuous development for future products. This trend continues and is supported by
the numerous new developments in the fiber industry. This includes, for example, high-temperature
fibers for filtration and high-tenacity fibers for structured parts such as moldings.

The application of natural fibers for car manufacturing still has a promising future, too.

In general, machinery and production lines have to be constantly improved with the aim that
the higher production goes along with quality improvements in the final textile product and a rise
of the availability. These are the classics for research and development. It must be highlighted
that a particular focus has to be on the easy maintenance or, in particular, the cleaning of the
machines, to minimize downtime.

The major cost factor in the textile business is fiber consumption. DiloGroup undertakes
great efforts to achieve further evenness of the fiber mass flow and a reduction of variability in
the end-product to achieve and allow further fiber savings. Alongside, there are also strong
development efforts to better fulfill ecological criteria in general, to further reduce energy
consumption, and to either reduce or reprocess waste. In certain markets, reduced water consumption
and wastewater treatment are also important objectives.

Dilo: Well, ITMA 2011 will be an indicator in a certain way of how the European
ITMA can further be developed and optimized in the future. By all means, the consequences of the
economic weakness of 2009 will still be apparent. One nevertheless expects that a strong
participation by visitors, particularly from the Mediterranean region as well as from South and
Central America, will be a strong signal for the location of textile production sites in the West.
This production may relate to some special applications and niche markets — among others, in the
sector of technical applications. The advantages of manufacturing close to the consumer markets
have a special impact on short-dated fashion trends and can therefore serve as one of the more
important reasons for a revitalization and increased flexibility in the Western textile economy.

For nonwovens, there is no such strong trend toward a shift to Asian production sites.
Therefore, ITMA in Europe remains attractive certainly for new machinery developments for the
production of technical textiles and nonwovens in Europe.