N
onwoven fabrics have seen impressive growth with penetration into a number of filtration
industry end-use market segments. Until nonwovens began to seriously access the market in the
1970s, woven textiles were the material of choice in many industry sectors. Nonwovens offered a
less expensive alternative and often a distinct technical advantage by the basic attributes of the
nonwoven construction. Today, the filtration industry worldwide is growing at 2 to 6 percent per
year above gross domestic product. Even so, the industry’s best years are ahead, with steady and
accelerated growth expected for the foreseeable future. 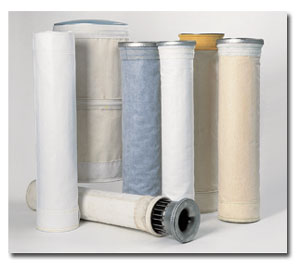 
In terms of synthetic nonwoven fabric sales, filtration totaled $735 million in 2007,
according to the Association of the Nonwoven Fabrics Industry (INDA), which reported filtration as
the largest dollar end-use nonwovens market in North America. It is arguably the most profitable
segment. If one were to add in wetlaid cellulose filtration media, total nonwoven fabric filtration
media sales approach $1 billion for North America and $2.1 billion to $2.3 billion worldwide. The
only other filtration media of comparable volume are membranes, with $2 billion to $2.2 billion
worldwide roll good sales in 2007. Together, nonwoven fabric and membrane filtration media dominate
the filtration media market, with more than 90-percent combined market share in terms of roll goods
filtration media volume in comparison to all other material forms. Nonwovens and membranes never
compete with each other in a specific application, as each has its specific advantages, and they
often are combined to complement each other. Typically, nonwoven fabrics add backup support and/or
mechanical strength to comparatively weak membrane media, allowing membranes to function at peak
performance.

Nonwoven fabric filtration media have dominated in applications such as coolant filtration,
baghouse filtration media, vacuum cleaner bags and many heating, ventilating and air conditioning
(HVAC) applications. In these and other applications, nonwovens are highly price-competitive. Yet,
a number of other end-use segments generate impressive profits, especially in liquid applications
when combined with membranes.

Air applications consume approximately 65 to 70 percent of the nonwoven filtration media,
with liquid uses consuming the remaining 30 to 35 percent. Liquid application end-uses tend to
generate higher margins for the nonwovens producer because of the specialized constructions and
performance requirements, particularly in the medical, pharmaceutical and microelectronics
industries. In addition, there are rapidly expanding global needs for pure and potable water. 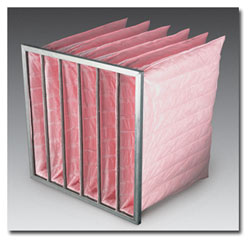 This pocket air filter from Filtration Group is made of meltblown fabric.


Several factors are driving nonwoven fabric filtration media growth, but two megatrends
dominate. First, manufacturers worldwide are filtering with greater frequency at finer micron
levels to achieve higher product quality. Examples include chemical processing, “produced water,”
mining, food and beverage, including high-purity processes such as pharmaceutical and
semiconductor. Second, environmental thinking worldwide is expanding at an increasing rate in
virtually every segment of our economy. Federal, state and local regulators are enacting laws and
regulations specifically targeted at discharges and waste streams at an accelerating rate. Most
industry followers believe the new administration in Washington will support further initiatives
and regulations, with the filtration industry being a major beneficiary.


To understand nonwovens growth in filtration, one must understand the close relationship with
membrane filtration media. In many liquid applications, microporous and reverse osmosis membranes
are experiencing rapid growth. Most membrane applications are growing by 8 to 10 percent annually.
Those dealing with water and wastewater are growing up to 15 percent per year and more.  In
light of requirements for finer levels of filtration in many market segments, a number of industry
experts believe this or even higher levels of growth will be sustainable for many years. The major
beneficiary of membrane growth and market penetration continues to be nonwovens used in combination
with membranes in various configurations. For example, nonwoven wetlaid polyester substrates
support reverse osmosis membranes in spiral wrap modules in a $30 million worldwide nonwovens
market. The modules are found in systems predominantly located in arid regions where seawater is
converted to potable water. Spunbond fabrics are used as pleat supports and separators in virtually
every microporous membrane cartridge sold, accounting for nonwoven sales of approximately $35
million per year.

Nonwoven meltblown and spunbond fabric along with nonwoven glass filtration media are the
principal air filtration media for HVAC – an 825 million- to 850 million-square-meter nonwoven
market in North America. High-efficiency particulate air (HEPA) wetlaid glass nonwoven filtration
media represent an additional 90 million to 100 million square meters. Air filters are found in
end-use markets from general dust filtration to high-efficiency filtration in many different
configurations. These filters are rated by a Minimum Efficiency Reporting Value (MERV) standard,
which rates filters from 1 to 20 in terms of their degree of efficiency. At the high end, MERV 17-
to 20-rated HEPA filters are typically used in situations that require absolute cleanliness for the
manufacture of microchips, liquid crystal display screens, pharmaceutical production and
microsurgery in hospital operating rooms. HEPA filters are primarily constructed from wetlaid glass
nonwoven filtration media, with a smaller portion of the market serviced by polytetrafluoroethylene
(PTFE) membranes laminated to a polyester base substrate for support. MERV 1-16, considered
HVAC-grade filters, are principally constructed of synthetic meltblown, spunbond or glass fabrics.
Overall, 75 percent of synthetic nonwoven media go into commercial markets, such as manufacturing
facilities, offices, theaters, hospitals, cruise ships, casinos and other such markets; with about
25 percent found in residential and general consumer air filters.

Nonwoven fabrics are also used as stand-alone filtration media in pleated cartridges. One
noteworthy example is cartridges, principally spunbond media, in the $30 million pool and spa
market. Other recognized cartridge applications include pleated cellulosic automotive engine
air-intake filters and oil filters on the family car, large semi-rigs and off-road vehicles; as
well as the smallest fuel filters on home lawnmowers, chain saws, power washers and other small
engines. Cellulosic media are relatively inexpensive, and are self-supporting when pleated, a key
factor along with the compatibility of construction materials with fluids and temperatures found
under the hood.

Wetlaid cellulosic and spunbond polyester media that range from 200 to 300 grams per square
meter (g/m
2) are used in pleated dust collection cartridges. In North America, dust collection
media represents a 15 million-square-meter market that is growing at 5 percent per year, according
to INDA. Pleated cellulose- or polyester-based filters offer significantly greater surface area
than needlefelt filter bags for a given space as an alternative filter configuration in baghouse
applications. Typically, dust collection cartridges and baghouse filters are found in manufacturing
environments and facilities that process materials that generate large quantities of fine, airborne
particles or dust. The filters are used to reduce particulate exhaust and prevent spontaneous
explosion when large quantities of fine particles accumulate in factory air.

Although pleated dust collection cartridges are an alternative to needlefelt baghouse
filters, needlefelt filter bags remain the clear industry leader in terms of dollars. Needlefelt
sales approach $120 million in North America and $530 million worldwide, with China being by far
the major driver of growth in recent years. Approximately 10 percent of the baghouse needlefelt
fabrics are laminated with a PTFE membrane providing for finer filtration and/or longer bag life.
Separately, the value of micron rated needlefelt fabrics constructed into liquid filter bags is
approximately $25 million to $30 million in North America and $65 million worldwide. For liquid
applications, nonwoven filter bags are used as final filters and in some cases as prefilters,
prolonging the life of final filters in heavily contaminated streams. 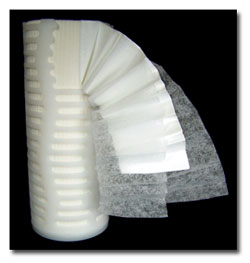 Pictured above is a cutaway of an Entegris Intercept® HSM 20 nm pleated cartridge filter.


Pleated dust collection and engine air-intake filters have a lightweight cover of synthetic
nanofibers over a base substrate of a wetlaid cellulosic or polyester nonwoven in a growing number
of applications. The nanofibers are as fine as 200 to 300 nanometers (nm) in diameter, with the
amount of nanofiber add-on being quite thin in cross-section and typically weighing less than 1 g/m
2 to 2 g/m
2. The nanofibers are laid down over what will become the upstream side of the substrate
using an electrospinning process, and in one case, an ultrafine meltblown process. These nanofibers
create a labyrinth of fibers with pores finer than particles in the incoming air stream.
Particulate deposits and resides on the surface of the fine nanofiber web, allowing the user to
clean the filter by shaking off loose particles from the surface or by using an automated clean-air
back-pulse system. The market is growing rapidly and is becoming an important market sector. All
major suppliers of air filters to the automotive and dust collection market have either internal
manufacturing processes in place or access to nanofiber media from outside suppliers.

By last count, more than 30 companies worldwide have electrospinning manufacturing processes,
but only a few have decent commercial volume. Many have the objective of producing a
heavier-weight, 15- to 90-g/m
2 stand-alone nanofiber web, without the cellulose or polyester base substrate. The
primary goal is to create filtration media to fill the micron rating gap between the finest
meltblown media and microporous membranes. Some manufacturers seek to mimic microporous membrane
micron ratings with higher flow rates. With regard to manufacturing costs, the relatively low
production speed of electrospinning is ideally suited for lightweight covers over substrates in the
dust collection and engine air-intake filters, as these applications require only a few grams of
fiber to cover the base substrate. Thus, heavier-weight electrospun webs have remained a challenge
because of low process throughput and high production cost compared to alternative filtration media
choices. However, there has been some headway by air filtration media producers who seek to replace
glass media in MERV 17-20 HEPA applications. Nanofiber nonwoven filtration media for applications
in the MERV 10-16 range and potentially for liquid applications clearly remains the largest
untapped potential. Should a lower-cost and/or alternative manufacturing process to electrospinning
be developed that can produce 15- to  60-g/m
2 nanofiber filtration media in the $3- to $5-per pound range, enormous opportunities
exist for the first successful producer. 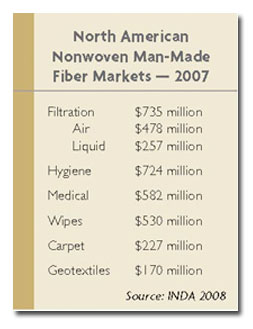 
Nonwoven fabric contributions have been an important mainstay for the success of the
filtration industry for many years, and the future is very bright. As the industry grows, new
constructions will be the order of the day, as there are many unmet media end-use needs and growth
opportunities for an innovative nonwovens producer. The filtration market has a large number of
application niches in which customers are willing to pay for performance. Thus, the most profitable
nonwoven fabric producers offer proprietary materials in less than commodity run size for niche or
near-niche applications. Some of today’s mainstays are gradually fading as new nonwoven fabrics
come to market as differentiated constructions for customers seeking solutions to unmet industry
needs.