A
lthough overall participation at the Industrial Fabrics Association International (IFAI)
Expo 2005 was a bit lower than in 2004, exhibitors reportedly were “extremely happy” with the
results.

“We couldn’t figure out at first why there was such a positive feeling on the show floor
knowing that our attendance was about the same as in Pittsburgh [the site of IFAI Expo 2004], but
our post-show exhibitor survey reported that exhibitors were happy for two reasons,” said Stephen
M. Warner, IFAI’s preson 150th Anniversary touring venueident and CEO.

“First, there were a lot of new faces. Forty-four percent of those attending were not there
last year; 17 percent were from outside the United States. That’s a record for us.

“Second,” he continued, &ldquo;the visitors represented larger companies, and more were in the
emerging markets like medical, safety, structures and military applications.”

Of the 437 exhibitors — up from 413 in 2004 — 83 participated for the first time at IFAI Expo
2005, held late last year in San Antonio. The number of attendees totaled 6,259, coming from a
record 51 countries to see what exhibitors had to offer and learn about new developments in the
specialty fabrics sector.

First-time attendees Gene and Maggie Huser of Kemah, Texas-based Bristol Fashion found the
expo to be quite worthwhile.“We made many contacts and were awestruck by the technology out there,”
they said. “IFAI Expo 2005 helped us, as small business owners, become more knowledgeable for our
customers.” 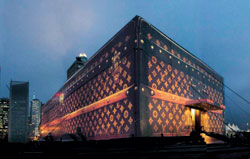 
Of special interest at IFAI Expo 2005, the Advanced Fabrics Exhibition promoted creativity
and innovation in the use of specialty fabrics.

On view were apparel, furniture, bowls and vases, bags, architectural systems, habitat, and
other objects and prototypes inspired by various specialty fabrics. Examples included: a
daylight-blocking, light-emitting curtain lamp submitted by Linda Worbin, Sweden; a strong,
lightweight resin-coated chair made of knotted carbon-fiber/aramid hybrid yarn submitted by Marcel
Wanders, Amsterdam; sports bags made with 3-D spacer fabrics submitted by Hybrids + Fusion, The
Netherlands; and coral-like bowls made by dipping cotton crocheted bowls into porcelain and then
firing them, which causes the cotton to burn away, submitted by Hil Driessen, Amsterdam; among
other articles. 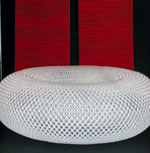 
Warner said a post-expo visitor survey indicated 65 percent of those polled planned to make a
purchase from an exhibitor within two weeks of the event’s closing as a result of the contact made
there. The post-expo exhibitor poll indicated 89 percent would return next year.

More than 70 percent already have reserved space for IFAI Expo 2006, scheduled for Oct.
31-Nov. 2, 2006, at the Georgia World Congress Center in Atlanta as part of Megatex 2006 — a
colocation of textile industry events that also will include the American Textile Machinery
Exhibition-International® 2006 and the American Association of Textile Chemists and Colorists
International Conference & Exhibition 2006.

Klopman Receives A Visit From Europe’s Largest Industrial Laundries, And Continues To Invest In...