A
strong interaction and spirit of cooperation has developed among suppliers of geotextile
and geosynthetic products, consultants, universities and field civil engineers with regard to the
use and specifications for these materials. There is no one type of geotextile or geosynthetic that
fulfills all needs; therefore, the development of specialty materials and their applications
continues to grow.


Understanding The Basic Functions Of Geotextiles

Separation: Separation refers to the ability of geotextiles to prevent the mixing of two
materials, such as a soft subgrade with a clean base aggregate.

Reinforcement: Soil movement is reduced by the confinement and reinforcing action of
geotextiles, which function by absorbing part of the stress that normally would cause shear
failure.

Drainage: The lengthwise permeability of the geotextile allows it to perform as a drain. The
amount of drainage is proportional to the thickness of the fabric. 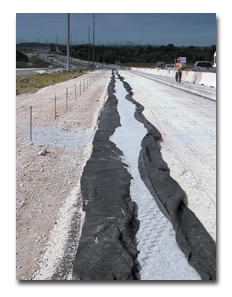 This nonwoven geotextile manufactured by Ten Cate Nicolon USA is used in a
drainage application during roadway construction.

In 1926, the South Carolina Department of Highways used heavy cotton fabric on a primed earth
base, followed by a hot asphalt coating topped with sand to reinforce roads. These roads exhibited
reduced cracking and localized failures, while the cotton fabric remained intact. As the cotton
fabric degraded, the roads gradually deteriorated. In the early 1960s, woven monofilament fabric
was used to eliminate an erosion problem along waterfront property in Florida. The success of this
project resulted in the US Army Corps of Engineers using the monofilament fabric for erosion
control and subsurface drainage. The US Department of Agriculture Forest Service also began to
experiment with woven geotextiles to stabilize logging roads in the mid-1960s. Some early woven
geotextile fabrics were made with Saran monofilament yarns, but later were made with polypropylene
(PP) monofilament yarns as they became available. Around this same time in Europe, strong interest
was growing in geotextiles, in part driven by higher prices and scarcity of gravel and sand.
Geotextiles allow more efficient use of these materials.

An important step in establishing geotextiles standards in the United States was the
establishment in 1984 of Committee D 35 on Geosynthetics by ASTM International, West Conshohocken,
Pa. The committee established subcommittees for mechanical properties, endurance properties and
filtration.

ASTM defines a geosynthetic as a planar product manufactured from polymeric material used with
solid rock, earth or other geotechnical engineering-related material as an integral part of a
man-made project structure or system. The members of Committee D-35 on Geosynthetics have played a
key role in the development and acceptance of geosynthetics by civil engineers and the construction
industry throughout the world. As of last year, 106 geosynthetic standards were contained in the
ASTM International Book of Standards, Volume 4.13. Robert M. Koerner, Ph.D., professor of civil
engineering at Drexel University, and director of GRI, has worked closely with ASTM, geosynthetics
producers and the civil engineering community to promote the use and acceptance of geosynthetics.
He has worked diligently with Committee D-35 since its inception to expedite the development of
standards for geosynthetics. As an educator, Koerner has integrated geosynthetics into the civil
engineering curriculum and conducted numerous workshops and courses on geosynthetics for practicing
civil engineers throughout the world.

Geosynthetics comprise a wide range of products. GRI defines these products as follows:

Geonets: polymer net-like sheets with in-plane openings that are used primarily as drainage
materials within landfills or in soil and rock masses;

Geosynthetic clay liners: prefabricated bentonite clay liners that are incorporated between
geotextiles and/or geomembranes and used as a barrier for liquid or solid waste containment;

Geocomposites: hybrid systems of any or all of the above geosynthetic products that are
specially designed for use in rock-, waste- and liquid-related problems.

GRI reports the total sales and use of geosynthetic materials in transportation, geotechnical
and environmental applications are increasing at rates of 10 percent to 20 percent in each of the
above categories.


Polymers And Fabrics Used In Geotextiles

The two most used polymers in geotextile products are PP and polyester (PET).

PP is used because of its availability, favorable price and ability to be made into a wide range
of textile structures. PET use in geotextiles is growing for specialty, high-performance
applications where low creep and a high degree of dimensional stability are required.

Most woven geotextile fabrics are made from slit film PP yarns, monofilament or continuous
multifilament yarns. A major application for slit film PP fabric is for silt fences to control
sediment runoff from construction. Most slit film yarns are pigmented black to maximize their
sunlight resistance. Woven monofilament fabrics are often used in erosion control applications.

Nonwoven fabrics for geotextile use can be made from either staple fibers or from continuous
filaments in the form of spunbonded fabrics that are subsequently needlepunched. The needlepunching
process enables fabrics to be made with controlled porosities. High-porosity fabrics reduce the
potential for clogging, making these fabrics useful for subsurface drainage and erosion control.
Heatbonding of nonwovens provides thinner and stiffer fabrics of lower porosity. The higher
strength of heatbonded fabrics makes them useful for road stabilization applications.


US Companies In The Geotextiles Business

, January 2005). In addition to manufacturing woven and nonwoven geotextiles, this company
is a major producer of carpet backings. Ten Cate Nicolon USA a leading manufacturer of woven,
nonwoven and speciality industrial and construction products and its Mirafi division, Pendergrass,
Ga., are part of The Netherlands-based Royal Ten Cate Group, a global supplier of technical
textiles and technical components. Royal Ten Cate recently celebrated its 300th year as a textile
enterprise. The company has extensive experience in geotextiles and geosynthetics because dikes in
The Netherlands depend on geosynthetics to protect low-lying land from being overtaken by the
sea.

SI Corp., Chickamauga, Ga., produces PP fiber as a merchant producer and also for use in its
nonwoven geotextile, carpet backing and industrial fabrics. The company’s geotextile fabrics are
produced by needlepunching PP staple fibers and by weaving PP slit film and monofilament yarns. SI
Concrete Systems, the division that markets and sells fibers for use in concrete reinforcement,
offers PP fibers, steel fibers and blended fiber solutions. SI Geosolutions, the division that
markets and sells geotextiles, has developed a range of erosion control blankets made from natural
fibers; and turf reinforcement mats made from PP yarns, fibers and nets. 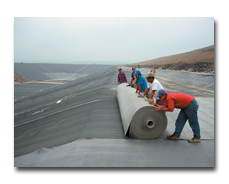 Charlotte-based Huesker Inc. is a producer of specialty geotextiles and geosynthetics. Huesker
Synthetic, the Germany-based parent company of Huesker, supplies geotextile and geosynthetic
products throughout the world. The company’s products which include Fortrac®, Comtrac®, Hatelit®
and Fornit® utilize woven and nonwoven fabrics of PP and PET, and a range of geogrid products alone
and in geocomposites. Comtrac is composed of woven or knitted high-tenacity PET and PP yarns. The
fabric develops tension at low strain when its high-tenacity PET yarns are placed in a linear
manner. This allows immediate soil-to-geotextile load transfer, which provides the tensile strength
required in reinforced soil structures. Comtrac is well-suited for reinforcement of weak earth
walls and foundation soils. Because the fabric is pliable and resistant to freeze-thaw conditions,
it is often used to reinforce earthen structures that are more than 20 feet tall.

“When we look at the geosynthetics market, we see two distinct segments,” said Thomas G.
Collins, president. Collins has worked in the geotextile and geosynthetic business for more than 30
years. “The larger market is driven primarily by need, ease of use and cost savings, and can be
handled by a stocking/distribution network. The smaller segment is comprised of specialty producers
who market their products on an engineer-to-engineer basis. A given project may have a need for
higher reinforcement, high puncture protection or a combination of materials in other words, film
bonded to nonwoven; or the engineer may need reinforcement with a low strain limit or a grid with
large apertures. These are specialty needs that can only be met with a level of trust between the
project engineer and the manufacturing engineer. These are rare stock items, and so, special runs
of material are created and shipped direct to [a specific] site. It is a small, niche market for
geosynthetics, but it is very important to the expansion of this industry.”

In geotextiles, PP will continue to amount to more than 50 percent of the polymer used. The use
of PET, particularly in woven fabrics, will grow in areas where its higher modulus and lower creep
properties will be an advantage. Use of geocomposites will continue to increase as producers
develop improved bonding and lamination techniques, and specialty product uses also increase. The
separation of polymer producers from the geotextile and geosynthetic industry will produce more of
an engineering approach to their use rather than a commodity marketing mentality.