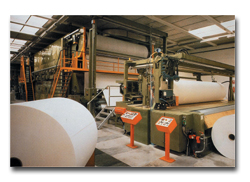 
T
he nonwovens and technical textiles industries have worked with proven bonding and
finishing methods for a long time. Lately, there has been considerable movement in the spunbond
market.

In the future, however, new bonding methods such as AquaJet spunlace technology from
Germany-based Fleissner GmbH will be used more and more for the production of new generations of
spunbonds. Fleissner, a leading supplier of spunlace and finishing equipment for spunbond webs,
cooperates with spunbond machinery producers such as Reifenhauser GmbH and Co. KG Maschinenfabrik,
Germany.

Both the spunlace technology and the spunbond process already have maximum growth rates today.
Spunlaced nonwovens – mainly carded staple-fiber webs – already have replaced and superceded many
other nonwoven products that were produced by other bonding methods. This explains the strong,
dominating position spunlace technology has in the market today.

The market trend of the last few years for the spunbond sector worldwide shows considerable
growth that will increase even more because of new bonding methods such as spunlacing.

The requirements made on spunbond products influence the choice of bonding and finishing
processes used in creating them. It is not important whether polypropylene (PP), polyester, other
homopolymers or bicomponent fibers are used.

Often, lightweight webs that have been calendered do not offer the desired softness for
applications in the hygiene sector. Subsequent treatment on an AquaJet spunlace line increases the
softness and improves the volume. This can be achieved at processing speeds of up to 600 meters per
minute (m/min). The spunlace line can be installed both in-line with the spunbond machine and
off-line.

The speed and efficiency of the production process for heavy webs for geotextiles so far have
been limited by the relatively low speed of the mechanical needling process, as higher speeds would
destroy the endless filaments, causing a reduction of strength. Bonding using spunlace technology
makes it possible to operate the line at higher production speeds, which increases line efficiency.
At the same time, the tensile strength of the goods is improved. Thus, fiber costs can be reduced
by the reduction in web weights, which considerably increases the economic efficiency of the
process. 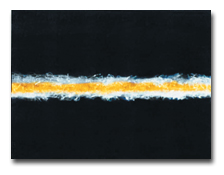 Fleissner’s AquaJet spunlace system may be used to make three-layered web structures, such
as the one above with cellulose fibers in the middle layer.

Production of wet wipes as three-layered composites by bonding PP spunbond layers on the outside
and an airlaid pulp layer on the inside results in two advantages: drastic improvement of water
absorbency because of the cellulose fibers; and high cost savings because the use of more than
50-percent pulp allows the raw material to be greatly reduced. Line speeds of 400 m/min to 600
m/min are possible.

When producing spunbond filaments from splittable conjugate fiber cross-sections, AquaJet
spunlace technology causes fibrillation of the fibers so that very fine filaments of less than 0.01
denier may be obtained. The nonwovens thus produced for example, Evolon® by Freudenberg Nonwovens
Group, Germany, are used for wipes with special properties because of the large fiber surface.
Nonwovens for garments and coating substrates such as artificial leather also are increasingly
being produced.