S
ome of the first documented references to the use of body armor in warfare were made in
ancient Egypt (circa 3000 B.C.). They describe a wraparound garment that extended from armpits to
knees reinforced with quilting and supported by shoulder straps. During this period, the Sumerians
used helmets that were tight-fitting caps of beaten copper. In Syria (circa 1400 B.C.), the
national costume – a sleeved shirt – was reinforced with bronze scales and used as armor for
charioteers.

After the assassination of President William McKinley in 1901, Congress showed interest in
the development of body armor. Garments were developed that were effective against low-velocity
bullets traveling at 400 feet per second or less, but these proved ineffective against the new
generation of bullets that traveled at speeds of up to 600 feet per second. The manufacturing cost
at the time – $80 per unit – also was prohibitive. Archduke Franz Ferdinand of Austria was said to
be wearing body armor of this type when he was assassinated in 1914. He had the bad luck to be shot
in the head.

A new generation of ballistic vests was introduced during World War II. The flak jacket,
used mainly by the military, was made of ballistic nylon and provided protection from munitions
fragments. It was very cumbersome and was ineffective against most rifle and pistol bullets.

The United States witnessed a dramatic increase in law officer fatalities from 1966 to 1971,
when the number of law officers killed in the line of duty more than doubled. The majority of the
fatalities occurred from handgun fire. To address this problem, the National Institute of Law
Enforcement and Criminal Justice – predecessor of the Washington-based National Institute of
Justice (NIJ) – initiated a research program to investigate the development of a lightweight body
armor that on-duty police could wear full-time.

The investigation identified new materials that could be woven into a lightweight fabric
with excellent ballistic-resistant properties. The National Bureau of Standards – now known as the
National Institute of Standards and Technology (NIST), headquartered in Gaithersburg, Md., and
Boulder, Colo. – mounted a parallel effort. Of all the developments by NIJ in the 1970s, the most
significant was the use of Wilmington, Del.-based DuPont’s Kevlar® aramid fiber. NIJ Technology
Assessment Program Manager Lester Shubin and Army Land Warfare Technology Specialist Nicholas
Montanarelli tested fabric made with Kevlar at a gun range and found that bullets did not go
through it.

From 1971 to 1976, more than $3 million of NIJ funds were used for the development of body
armor. The research and development program was a team effort involving private companies and
government agencies. Private contractors included El Segundo, Calif.-based Aerospace Corp. and
Mitre Corp., located in Bedford, Mass., and McLean, Va. Government agencies involved in the program
included Edgewood Arsenal, Aberdeen Proving Grounds, the US Army Soldier Systems Center,
NIST, the Lawrence Livermore Laboratory, the Federal Bureau of Investigation and the Secret
Service.

The development of body armor by NIJ took place over several years and was a four-phase
effort. In 1975, an extensive test of the new Kevlar body armor was conducted using 15 urban police
forces in cities having populations of more than 250,000. The tests involved 5,000 garments,
including 800 purchased from commercial sources. The tests showed the body armor could be worn
without restricting the police officers’ ability to do their jobs, and, more importantly, that the
vests worked.

The demonstration body armor issued by NIJ was designed to ensure the wearer a 95-percent
probability of survival after being hit with a .38 caliber bullet at a velocity of 800 feet per
second. Furthermore, the probability of requiring surgery if hit by a projectile was to be 10
percent or less.

A final report released in 1976 concluded that the new ballistic material was effective in
providing a lightweight and wearable bullet-resistant garment for full-time use. Private industry
recognized the market potential for the new body armor, which soon became commercially available.

Police officers’ most common threat is from a gun, while correctional officers’ major threat
is from stab wounds. In response to the needs of the correctional community, NIJ developed a
performance standard for stab- and puncture-resistant body armor in cooperation with other
organizations in the United States and the United Kingdom.

Though it protects well, armor is one of the heaviest items worn or carried by troops.
Engineers on the Ballistics Technology Team at the US Army Soldier Systems Center, Natick, Mass.,
are working to develop better and lighter ballistic protection systems for our troops. “The Army is
putting the best available armor materials into soldiers’ armor,” said Philip Cunniff, a research
mechanical engineer at the center. “Part of our work in the Ballistics Technology Team is to
develop new materials and techniques to lighten the load of those armor systems.”

In the 1990s, an improved version of Kevlar helped lighten vests by 25 percent and increased
ballistic protection. The team’s objective is to reduce the weight of armor by another 25 to 30
percent without losing performance. As part of this project, they are working with a range of
high-performance fibers.

Kevlar, patented in 1966, was based on the work of Stephanie L. Kwolek and Herbert Blades of
DuPont. The first DuPont plant for the fiber was built in Richmond, Va., in 1971, and commercial
production  began in 1972.

Kevlar is an exceptionally strong material: Currently, it is produced in three grades, and
even the weakest is much stronger than steel and only half as dense. It is used for many
applications such as bulletproof vests, where strength and low weight are top priorities. Over the
years, DuPont has continued to improve the fiber properties to boost its performance in ballistic
applications.

DuPont’s development and marketing efforts for ballistic fabrics have included programs such
as the International Association of Chiefs of Police (IACP)/DuPont Kevlar Survivors Club and the
Partners Program™ to aid in protecting the lives of law enforcement and correctional officers.

The Netherlands-based Akzo Nobel’s fibers business unit developed Twaron®, a super-strong
para-aramid fiber, in the early 1970s. In 1976, the first pilot plant for Twaron was built, and by
1985 five plants were operational on two sites. At the end of 2000, Twaron activities were taken
over by Teijin Ltd., Japan, and a major capacity increase was completed in 2003. Teijin projects an
8- to 10-percent increase in the worldwide aramid fibers market in future years, and is adding
another 5- to 10-percent increase in capacity. To support Twaron use in ballistic applications,
Teijin maintains a shooting range in Germany and conducts ballistic fabric production at the
Textile Technical Institute in Germany.

Twaron CT microfilament is used in ballistic products such as helmets and in vehicle
laminates that can be incorporated during production or as an aftermarket addition. The Twaron
laminate is used in cars, security vans, combat vehicles, trucks for United Nations missions and
aircraft. 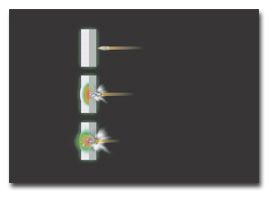 In the mid-1970s, A.J. Pennings, Ph.D., and his associates developed a method for gel
spinning high molecular weight, high-density polyethylene to produce ultra-high-strength
polyethylene fibers. Some of these patents were assigned to Stamicarbon, The Netherlands.
Development was pursued by The Netherlands-based DSM Dyneema BV, and some of this technology was
licensed to AlliedSignal Inc. – now the Colonial Heights, Va.-based Advanced Fibers &
Composites business unit of Honeywell International Inc., Morris Township, N.J. In the United
States, AlliedSignal commercialized the high-strength fibers as Spectra 900™. This
ultra-high-molecular weight polyethylene (UHMWPE) fiber has strength in the 32 to 35
grams-per-denier range. AlliedSignal pursued ballistic fabric uses for Spectra including protective
clothing and hard composite armor systems under the trade name Spectra Shield®. After acquiring
AlliedSignal in 1999, Honeywell has continued to develop Spectra and products made from the fiber.

Pound for pound, Honeywell Spectra fiber is 10 times stronger than steel and 40 percent
tougher than aramid fiber. The company has been making Spectra Shield ballistic armor for more than
15 years. The shield technology lays parallel strands of man-made fiber side-by-side and binds them
in place with a resin. The layers of tape are then cross-plied at right angles and fused under heat
and pressure into a composite structure. The nonwoven structure causes the energy of the projectile
to dissipate rapidly.

Honeywell has developed a family of products for ballistic uses around its Spectra fiber.
Spectra Shield Plus LCR is a soft armor product that is 25-percent lighter than the original
product. Spectra Shield PCR is used for hard armor applications such as rigid armor plates, breast
plates, vehicle armor, blast containment and riot shields. The latest version of this product is
30-percent lighter than the original version. SpectraFlex® is used in soft body armor. Spectra
Shield Plus Flex combines Spectra fiber and Shield technology and is 25-percent lighter than the
original version. Gold Flex® combines Shield technology with aramid fibers and provides body armor
manufacturers with additional design flexibility.

Spectra Shield composite material forms a basis for small arms protective insert plates used
in the Interceptor vest used by US troops in Iraq and Afghanistan.

In June 2004, Honeywell announced a $20 million investment to boost Spectra fiber production
at its facilities in Chesterfield County, Va., to meet customer demand. The expansion will be
completed in the second quarter of 2005. 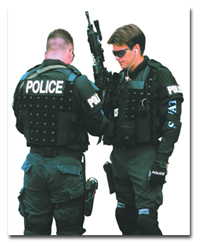 DSM Dyneema BV’s Dyneema™ UHMWPE fiber is produced in The Netherlands at DSM’s facility, and
in Japan through an agreement with Japan-based Toyobo Co. Ltd. In the United States, it is produced
not only under license to Honeywell as Spectra, but also by DSM at its new fiber production plant
in Greenville, N.C. The plant produces 1.2 million pounds per year of the high-strength fiber, much
of which will be used in ballistic products.

DSM was selected by C&D Aerospace, Huntington Beach, Calif. – a builder of aircraft
interiors – to collaborate on the design of secure aircraft cockpit doors. Dyneema fiber is being
used in this application because of its ballistic properties and low weight. The first aircraft
door panels were used in Boeing 737 and 757 planes, and in planes made by Bombardier, Quebec, and
Empresa Brasileira de Aeronáutica S.A., Brazil.

Body armor made from Zylon provides excellent protection at a light weight, according to the
company, and has been responsible for saving a number of lives since its introduction into
protective apparel.

Magellan’s M5® fiber is a promising product for use in ballistic fabrics. M5, the brainchild
of Doetze Sikkema, Ph.D., was conceived as part of his advanced polymer research with Akzo Nobel.
Eugene H. “Gene” Vetter, CEO, Magellan Systems International LLC, Richmond, Va., acquired the Akzo
technology and hired Sikkoma as chief scientist. Magellan is scaling up the production of the fiber
and building a production plant, and is working with DuPont on this development. In addition to
very high tensile strength and excellent high-temperature properties, M5 shows plastic behavior in
compression.