SML Maschinengesellschaft mbH, Austria, reports it has sold its first cast film line for melt
embossed and breathable films to a customer in Europe. End products for the manufactured films
include diapers, panty liners and sanitary napkins. 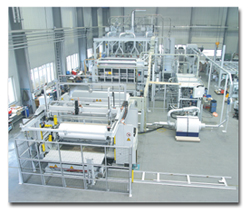 SML has sold its first cast film line to a customer in Europe.

According to SML, the line features two extruders with a maximum output of 1,200 kilograms
per hour (kg/h) for breathable films and 1,000 kg/h for melt embossed films. Maximum finished film
width is 2,500 millimeters, and the machine has a maximum line speed of 450 meters per minute.