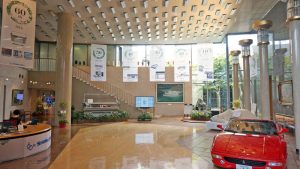 WAKAYAMA, Japan — September 1, 2022 — Computerized knitting machine manufacturer SHIMA SEIKI Mfg. Ltd. is celebrating its 60th year of business by holding an anniversary event at its headquarters in Wakayama, Japan. The three-month long open-house event held September through November 2022 features a virtual fashion show, a presentation of the latest proposals in DX for fashion, and machine and sample exhibits for fashion and non- ashion markets. A special 60th Anniversary website has also been launched that allows browsing of event content for those unable to attend the event physically, as well as its own online seminar agenda.

Throughout the years, Shima Seiki’s history has been marked by innovations that center around customer benefit, with an emphasis on reducing waste. Although the terms “sustainability” and “DX” did not exist at the time, looking back it becomes clear that even back then these issues were consistently being addressed by developing solutions that are consistent with modern values and goals. 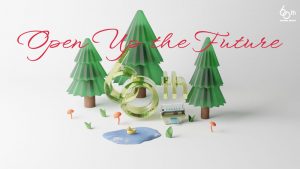 Shima Seiki’s 55th Anniversary celebration five years ago was no exception. The company introduced sustainability to its customers along with various proposals in virtual sampling, including VR and AR experiences. Since then the spread of COVID-19 became a wake-up call for the apparel industry, which immediately began to search for new methods of production that offered a higher sustainability factor and lowered risks in response to the overflow of dead inventory due to consumer inactivity as a result of worldwide lockdowns, and subsequent financial loss, not to mention the enormous amount of waste involved. Although demand for both WHOLEGARMENT® knitting machines and design systems have increased, it is still Shima Seiki’s view that this overall trend for green production and digital prototyping is not a big enough market shift that takes full advantage of sustainable DX efforts. Therefore Shima Seiki is sending an even stronger message for its 60th Anniversary event, in an effort to accelerate the widespread use of virtual samples to reduce waste throughout the supply chain to ensure a sustainable future for the fashion industry and for the planet as a whole. The theme for the event, “Open Up the Future” proposes solutions for a cleaner and brighter future instead of the polluted scenario often portrayed as an example of where the world is headed by current standards. 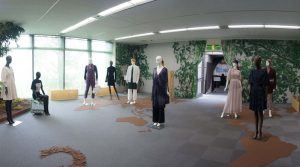 An all-digital virtual fashion show presented at the Hi-Vision Hall theater features the Shima Seiki 60th Anniversary Collection worn by 3D virtual models and demonstrates new ways to present fashion items without physical constraints associated with conventional fashion shows such as time, place, weather, etc. Virtual fashion shows can be enjoyed by anyone anywhere in the world at any time, and at the same quality. They can also be presented without the need for actual samples present, allowing the display of color and design variations without having to produce any of them. Physical versions of WHOLEGARMENT samples from the collection are on display as well. These are registered in cyberspace to allow for viewing of details and specifications in AR (augmented reality) on site, as well as in VR (virtual reality) for remote viewing online.

DX proposals include a special collaboration with a Japanese telecommunications company displaying the latest in XR (cross reality) technology as it applies to fashion based on virtual samples created on APEXFiz™. These include AR and VR presentations of the 60th Anniversary Collection as well as digital catalogues for viewing at retail stores, that offer new types of digitally extended customer experiences. A display of on-going research items in novel fiber engineering using the latest knitting technology demonstrates progress of Shima Seiki’s collaboration with MIT Media Lab at Massachusetts Institute of Technology. A special metaverse presentation by Shima Seiki R&D offers a sneak peek into the future of product planning by providing a virtual meeting space where participants from all stages can meet and evaluate fashion items.

Other displays about company concept and history round out the 60th Anniversary experience at Shima Seiki headquarters.

In addition to the physical event held at Shima Seiki, a special website has also been launched that features most of the event’s exhibits, including DX proposals and VR/AR experiences as well as the virtual fashion show. A special online-only event consists of a series of webinar sessions, ranging from introductions by yarn manufacturers registered to the “yarnbank” digital yarn sourcing web service about their latest yarn collection, to useful tips and solutions for various Shima Seiki products, and keynote speech by MIT Media Lab Director and former NASA Deputy Administrator Professor Dava Newman.

The 60th Anniversary event is open to Shima Seiki customers and visits are by appointment only. The online portion can be accessed by anyone, while the seminar sessions require pre-registration, which is free.