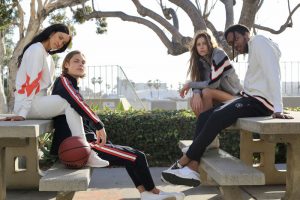 CHICAGO — May 24, 2021 — Making a play from court to everyday life, Wilson Sporting Goods Co. introduces, Wilson Sportswear, a new apparel line that aims to empower every human to live like an athlete. The apparel line, now available in the U.S. and China, signals the evolution of Wilson into its next phase as a household athletic lifestyle brand.

As part of the strategy driving this evolution, Wilson will merge the intersection of sport, fashion and culture. Tapping its roster of athletes and sport heritage for inspiration, Wilson will also collaborate with notable partners that drive and shape culture as we know it today.

“For more than a century, Wilson has been designing equipment to the specifications required by the world’s greatest athletes,” said Gordon Devin, president of Wilson Sportswear. “We are excited to extend our craftsmanship, history and heritage to apparel. As athletes continue to redefine themselves, Wilson is redefining the athletes’ uniform, coupling the premium performance expected from Wilson with fresh styles inspired by athletes.”

New Wilson Sportswear items are expected to drop bi-weekly, with special collaborations planned around key moments in sport culture. The line includes an array of premium crafted sets for men and women including French Terry Hookups and Woven Warmups.

The Starting Lineup from Wilson Sportswear is sold exclusively at Wilson.com in the United States, and via WeChat and other leading brand sites in China. Later this year, Wilson will continue its lifestyle expansion with the opening of its first-ever retail locations in the key markets of Chicago, New York, Beijing, Shanghai and more — in which consumers will be able to immerse themselves in the world of sport and interact with the Wilson collection of Sportswear and Sporting Equipment first-hand.

With the launch of Wilson Sportswear, Wilson is also extending its Advisory Staff network — comprised of more than 10,000 professional athletes, coaches and teaching pros — to include a select group of esteemed luminaries who intersect sport culture in unique ways.

“The Wilson Advisory Staff is a dynamic group of athletes, creatives and entrepreneurs who are greatly influencing sports and culture today. It’s such an honor to be included,” said Wilson Advisory Staff member Phillip Leyesa. “It’s incredible to see Wilson not only respect my craft as an artist but value my opinion as a creative, to add a refreshing spin on athleisure with the new Wilson Sportswear collection. The styles are modern, versatile and can easily take anyone from the field to everyday life.”

Other Wilson Sportswear Advisory Staff members include Beija Velez, designer, stylist and model; Kelley James, musician; Jahmal Cole, founder and CEO of My Block, My Hood, My City; and more.