Designed for athletes seeking maximum flexibility during workouts, Stretch-Power fabric
provides warmth without the weight and restriction of fleece, is less bulky and has added support,
according to the company. 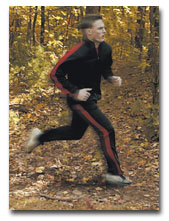