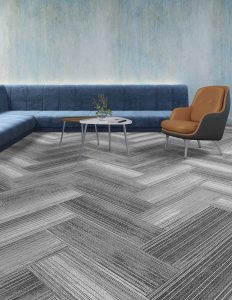 BRISTOL, Va. — March 23, 2020 — Universal Fibers — a producer of high-quality solution-dyed fiber for the flooring, transportation and industrial markets — announced today that AtlasMasland broadened its commitment to performance and sustainability with the launch of Revealed, its second product series made of Thrive® by Universal Fibers®.

As the most sustainable type nylon 6,6 fiber in the world, Thrive consists of 75-percent recycled pre- and post-consumer material while reducing carbon emissions by 70 percent. Universal Fibers recognizes carbon as a contributing factor to climate change and is doing something about it with Thrive. As an early adopter, AtlasMasland was first to launch products with Thrive, and has since reduced carbon emissions by approximately 1 million pounds per year — an annual offset benefit equal to all the trees in New York City’s Central Park.

“Revealed features three visually inspiring styles; Uncover, Unmask, and Unveil — all designed to mix and mingle effortlessly in broad applications including corporate, education and retail,” said Suzanne Zurfluh, marketing director, AtlasMasland. “The striking visuals paired with its powerful performance and sustainability story make Revealed the perfect solution for the most coveted commercial spaces.” In addition to the use of Thrive, Revealed furthers its eco-value with Sustaina™, a non-PVC, non-polyurethane, recycled backing system. The combined use of Thrive and Sustaina establish Revealed as virtually the most sustainable modular carpet in the industry.

Universal Fibers President, Phil Harmon, added: “We value our partnered relationship with AtlasMasland, and we are thrilled with their new launch of Revealed. As AtlasMasland continues to expand their product offering with Thrive, this speaks for their continued commitment to quality and performance, while doing what’s best for our environment.”