CALHOUN, Ga. — October 7, 2014 — Earlier this week, Georgia Governor Nathan Deal toured the Mohawk Flooring Center in Calhoun, visited with individuals to learn more about their roles in the business and spoke to a large group of employees about the importance of the flooring industry in the state of Georgia.

Gov. Deal began his visit with a discussion with Mohawk Industries CEO Jeff Lorberbaum and members of the Company’s executive team. The governor reiterated his support of the industry and the importance it represents to the state’s economic well-being.

Later, Carpet segment president Brian Carson gave the governor a tour of the Flooring Center and then introduced him to a group of Mohawk employees. Carson highlighted Gov. Deal’s longstanding knowledge of the flooring industry and his support of Mohawk Industries.

This is not the governor’s first visit to Mohawk. Last year, Gov. Deal spoke at Mohawk facilities in Dalton, Summerville and Rome to highlight the Company’s investments in new manufacturing technologies and the creation of jobs at those locations. Throughout his remarks to the employees who filled the Flooring Center cafeteria, Gov. Deal shared his perspective about his past four years in office. He added that in 2014, the state’s revenues have grown 5.71% over fiscal 2013, the result of an economic rebound that the governor linked to job creation.

“We’ve laid the proper foundation for continued job growth,” he explained. “For the last 12 months, Georgia ranks number 6 in the country in terms of total new jobs, and most of the states ranked ahead of us are twice or three times larger.”

Gov. Deal recognized the importance of the flooring industry to Georgia’s economic recovery. “We’ve seen thousands of new jobs that have already come online or have been announced, and Mohawk has been involved in many of those expansions,” he added. 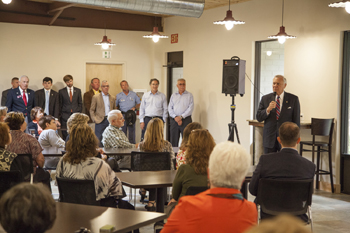