BIRKENHEAD, United Kingdom — February 16, 2012 — Cotton Outlook’s initial world production forecast
for the 2012/13 season foresees a decline in cotton area of 3.3 percent (area expanded by 11
percent and around 7.0 percent, respectively, during each of the last two seasons) and a similar
percentage reduction in output (versus growth of 13.6 and almost 7.4 percent, respectively). The
area projection is 34,618,000 hectares, and the production forecast is 25,686,000 tonnes.

However, despite the setback to production and the partial recovery of consumption (estimates
of which have decreased by an aggregate 9 percent over the two preceding seasons), the statistics
indicate a substantial net surplus, approaching two million tonnes, during next season. 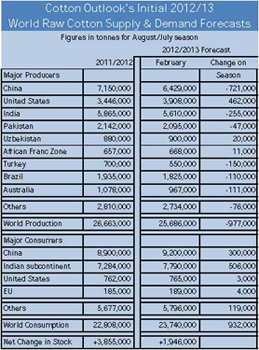 Full details of Cotlook’s figures for this season and next are published in this week’s
edition of the weekly Cotton Outlook magazine. For details of how to subscribe please visit
www.cotlook.com, or email subscriptions@cotlook.com.