D
efining high-tech fibers is no easy task. One person’s high-tech material may be
another’s chopped liver. Is moisture absorbency high-tech? What about extra strength, heat
resistance or even conductivity?

You get the drill. High-tech defies the laws of uniformity.

Textile World
has decided to establish its own parameters and focus discussion of high-tech fibers on those
it believes target new textiles and/or new textile processes. This allows an investigation of
materials based upon a judgement of market positions (including level of development) and their
ability to energize the innovative juices that flow liberally through textiles. This discussion of
high-tech fibers is organized into classes by raw materials, and compares the relative advantages
and characteristics of each vis-à-vis direct and indirect competition.  While high-tech fiber
markets overlap, in most cases they can be segmented based upon processing technology and
materials.

This article will focus on the majority materials of glass, carbon and ceramics. A follow-up
piece in a later issue of

TW
will look at the advances in aramid, quartz, boron, polyethylene and hybrid items designed to
build performance characteristics for a particular market niche. 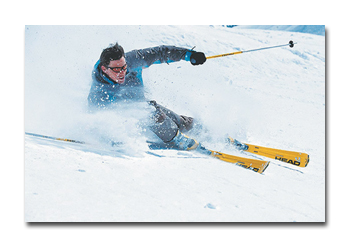 Advanced Cerametrics Inc. and Head NV are developing active fiber composite skis and tennis
rackets that supply more functional edge on a ski and more power to a ball hit.


Discussion of high-tech fibers almost necessarily involves examination of growth
opportunities for fibrous materials and structures in building composites. Composites are defined
as structures containing one or more separate components selected to compensate for or eliminate
weaknesses in other material components. Composites generally are composed of a matrix material
(polymeric, ceramic or metallic, among others) combined with strength-adding fibrous-like materials
whose role is to increase the in-use structural performance of a lighter-weight combined structure.
The two (or more) components maintain their separate identities, but in combination work
interactively to the performance advantage of both.

The combination of high strength and light weight is the carrot on the string that drives
new markets. Rising oil prices and environmental constraints combine to demand greater efficiency
and effectiveness from the structures; possibly, composites are the answer. Users may select from a
myriad of materials to obtain vibration damping, resistance to expansion under varying heat
conditions, fatigue resistance, corrosion and wear. The major fiber types used in advanced
composites include carbon, glass, ceramic, polycarbons and metals.

Composite materials appeared headed for significant growth in the late 1980s, and most of
the ’90s. Unfortunately, three macro-economic events slowed and confused this advance. First, in
the late ’90s, public policy demanded reductions in military expenditures, and advanced composite
development funding fell victim to the cost cutter’s axe. Second, the tragedy of 9/11 subsumed
advanced development in a national malaise, the effects of which were further highlighted by a
nagging business recession in 2002 and 2003. The literature of the last two decades is rife with
enthusiastic forecasts in the ’90s followed by a determined silence in the current period. Further
evidence is provided by the larger number of merger/acquisition/de-merger/shutdown activities.
Frankly, it is not easy to trace the family trees of some market participants. Significantly, many
US developments were purchased/absorbed by foreign owners, particularly those based in Asia.

Industry estimates project that high-performance materials incorporating matrix resin
composite technologies in 2007 will consume more than 4 billion pounds of materials, split
approximately into two-thirds  resin and one-third reinforcing materials, including fibers.
Based upon the history of forecast accuracy in composites, it is unlikely the industry will meet
the underlying 7-percent to 8-percent annual growth rate implicit in this projection. 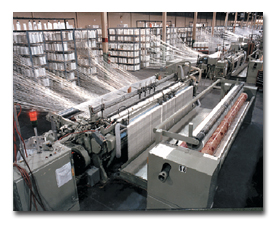 The US glass fiber market is dominated by Pittsburgh-based PPG Industries and Toledo,
Ohio-based Owens Corning. A number of smaller producers cover the markets that are too small for
the big two.

Glass fibers are supplied in continuous, roving, yarn and chopped form – with the
ingredients and coatings determining the ultimate fiber characteristics. In production, raw
materials – more than 50-percent silica sand – are “melted” and reformed into individual filaments
ranging in diameter from less than 3 microns to more than 35 microns. Other ingredients are added
to design performance characteristics into the final fiber.

Electrical glass, or e-glass, is an excellent electrical insulator, making it a natural
component in radio-signal applications, radomes, antennae and circuit boards. It also turns out to
be the most economical glass fiber for composites offering sufficient strength at a low cost,
morphing into today’s standard form of glass fiber.

According to HPC magazine, e-glass is at least 50-percent silica oxide with the remainder
composed of metal oxides of aluminum, boron and calcium plus clay, limestone, boric acid and
fluorspar. The ultimate end-use determines what properties are required from additives.

When further strength is required, high-strength s-glass is available.  Known as
r-glass in Europe and t-glass in Japan, the product achieves orders-of-magnitude increases in
strength by incorporating higher proportions of the oxides of silica, aluminum and magnesium.
Unfortunately, for competition with ceramic fibers – where temperature stability is vital – s-glass
erodes at higher temperatures. Fiber coatings provide partial relief, but the coating often adds
its own problematic characteristics to the composite. 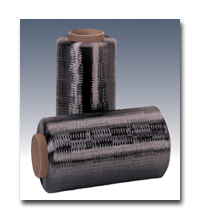 
Carbon fibers are the most widely used fibers in high-performance applications. They are
produced from rayon, petroleum or coal tar pitches and – the most popular – polyacrylonitrile
(PAN). While all meet the definition of carbon fibers, each brings different characteristics to the
end-use.

Early carbon fibers were produced from rayon precursors, and the fiber’s dogbone cross
section made it an optimal material for the carbon/carbon materials and the ablative structures of
the space shuttle program. PAN-based fibers show good-to-excellent strength and high stiffness,
while pitch-based materials show PAN-like strength, extremely high stiffness and a negative axial
coefficient of thermal expansion,  meaning an extremely stable structure under varying heat
loads.

Current market interest in carbon fibers traces its roots to the 1960s and 1970s excitement
surrounding the US space program. In truth, carbon fibers trace their even older roots to Thomas
Edison and the famous 19th century incandescent lightbulb filament experiment.

According to HPC magazine, much “debate exists over industry statistics for carbon fibers.
Estimates of world-wide demand for continuous, PAN-based carbon fiber (sic) range from … 30
million lb to 50 million lb.”

The magazine’s latest estimate puts industry capacity at 70 million pounds for conventional
and large tows. Despite an up-and-down consumption history, hope continues to spring eternal that
true commercialization of carbon materials is just around the corner. To this end, market reports
suggest major suppliers are planning capacity expansions, although against an estimated
double-supplied market the judgement is questionable.

Carbon fibers probably have the widest distribution of all specialty/ high-tech fibers, if
for no other reason than that, excepting glass, they have been worked into advanced structures for
a longer time than competitive materials. End-uses include the obvious aerospace structural and
ablative applications; low-cost asbestos replacement in automotive (including trucking and off-road
vehicles) brakes and clutches; chemically resistant packing and gasket materials; sporting goods;
additions to plastics, ceramics and adhesives to provide conductivity and shielding characteristics
in electrical applications; and an expressed probability of future use in fuel cells.


The attractiveness of material synergies achieved by combining fibers and matrices has not
escaped the ceramics industry. Ceramics’ intrinsic characteristics make them ideal building blocks
in markets requiring strength, stiffness, thermal expansion and thermal conductivity. Sadly,
however, ceramics are extremely brittle and, therefore, are rarely available in large-sized
structures. The answer is fiber reinforcement to deflect the energy of a forming crack; and for the
past several decades, much work has focused on this development.

Ceramic fibers can be engineered to the specific characteristics required by the reinforcing
activity. The ability to “spin” ceramic fibers to “match” the matrix could be an important
development, but potential volumes and physical difficulties, mostly focused on heating regimens,
have delayed the work. Most recent development work, therefore, has focused on two readily
available materials – silicon carbide (SiC) and aluminum oxide (Al2O3) and combinations of the two.

Ceramic fibers are produced in several forms, mostly continuous filaments and “whiskers” –
short fibers added to a slurry of the matrix for non-dimensional strength support.  Continuous
fibers are particularly desirable in producing continuous-fiber-reinforced ceramic-matrix
composites, the holy grail of the composite manufacturer.

Ceramics also are ideal in non-strength applications. One of the more interesting is
produced by Lambertville, N.J.-based Advanced Cerametrics Inc. (ACI). Using a proprietary process,
the company produces a line of piezoelectric ceramic fibers. (Author’s note: the piezoelectric
effect develops a current from mechanical work and produces mechanical work from an electric
current. The glittering lights on the heels of a child’s sneakers are lit by piezoelectric material
in the heel, actuated by the child’s leg/foot movement).

ACI is working with sports equipment manufacturer Head NV, Amsterdam, in development of
Intellifiber and Intellichip active fiber composite tennis rackets and skis. ACI supplies actuators
that actively dampen the vibration created during a ball strike or edge chatter from a ski turn,
using the energy to create an electrical force to counteract the mechanical forces and control the
shape of the ski or racket. ACI claims the piezoelectric structure adds up to 15-percent more power
to a ball hit and about 6-percent more functional edge on a ski.

The Head sports project is but one use of ACI’s materials. Long-term, the company sees
piezoelectric fiber materials becoming integral parts of ultrasound testing equipment, actively
controlled automobile suspensions and a myriad of acoustic applications.

Expanding on the success of piezoelectric fiber, ACI is working to develop conductive
titania fibers for use as conductors in stressful or destructive environments.


Some of these examples of smart fibers are not “new smart,” but extensions of existing
technology. However, the developments achieved by these fiber manufacturers provide high-tech
components for the textile industry to adapt to its going-forward product lines. Rare is the need
for a primary sophisticated structure – tri- or multiaxial weaving or knitting, for example.
Examination of the ingredients suggests simple fabric constructions using high-tech materials can
provide a basic component for a smart structure.

Polymeric materials, increasingly  being developed to supplant or replace the natural
materials used in glass, carbon and ceramics, will be covered in part two of this feature.