I
n past articles,

Textile World
has regularly documented the shrinking man-made textile fiber industry in the
industrialized world and the concomitant explosive rise of production in the developing economies
of Asia. The logic is brilliant in its simplicity: Asian economies built large export businesses
and programs by vertically integrating fiber, fabric and garment manufacturing, thereby ensuring
that the entire value added in the supply chain remains in the country of origin. Driven by
apparent comparative advantage in wages and enticed by the siren call of reduced unemployment and
acquisition of hard currencies to fuel further expansion into a full range of consumer goods, Asian
countries crafted and implemented well-designed programs to capture global garment manufacturing.

Specifically, Asian countries and companies focused on manufacturing polyester, which
virtually has become the fiber of choice, albeit often combined with cotton, in garment production.
Examination of the movement of the critical mass of fiber manufacturing from the industrialized
West to the developing East is a study in comparative economics and social realities.

It is increasingly clear in what region fibers will be made, but the question of the leading
country or countries in the region is less obvious. Preliminary data exhibiting the difficulties in
accurately projecting fiber demand and production may shed some light on the situation.

Production data are used for this comparison. The textile and apparel complex long ago
became global, and demand is unfettered by political borders. The Asian export model retains the
total value added and is designed to compete worldwide. 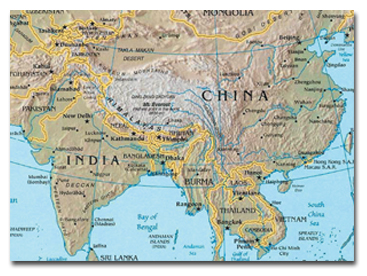 The World Of Fibers


Table 1 details the recent history of the major participants in the man-made fiber industry
and projects volumes into 2010.

According to the United Nations, world population will reach 6.812 billion people by 2010.
World per capita production of man-made fibers reached 12.35 pounds per person in 2000,
representing a decade-long annualized increase of 2.99 percent, most of which came in the 1995-2000
period, when production surged by a compounded 4.86 percent per year, driven by enormous increases
in Southeast Asia in an export response to a regional recession and economic crisis. Repetition of
such rates is unlikely, so a lower rate of growth is forecast through the first decade of the new
century. Given the energy drag created by unrest in the Middle East and possible banking problems
in several Asian nations, total production rate increases are forecast at about the level of the
1980s to early 1990s experience, yielding a man-fiber production of 98.275 billion pounds in the
year 2010, and, adding in cellulosics, total man-made fiber production of 102.175 billion pounds.


This is an article about polyester, but one fiber does not move in an airless vacuum.
Substitution still is a valid competitive strategy that, unfortunately for some fibers, often is
designed away in a race to penetrate a new market area. The result is what is seen today. By and
large, fibers are used for their utility in specific markets. Acrylic is bulky and
chemical-resistant. It is not as good in permanent-press. Polyester is difficult and expensive to
dye, but has attributes that make it ideal for blending with cotton and in resin applications.
Nylon covers floors and women’s legs. It can be treated for dirt and dust resistance and spun into
fine, sheer filaments to enhance the female leg.

Looking forward to 2010, it is projected that polyester and olefins will continue to
dominate fiber growth. Other fibers will struggle to maintain position, and several will formally
enter the decline phase of the product life cycle. Their role in helping polyester dominate the
man-made fiber world deserves comment. 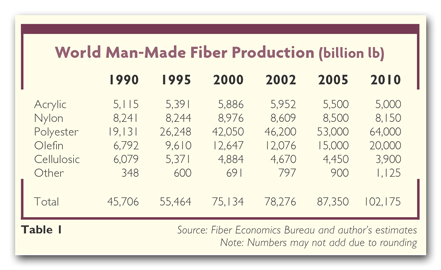 
Recent world production of acrylic fibers has stagnated at the 6 billion-pound level, most
of which (58 percent) is produced in China and Europe. Acrylic gradually is losing the price battle
with polyester and increasingly is relegated to bulk and wool-substitute end-uses. Acrylic’s
excellent chemical resistance makes it natural for a multitude of markets, and the fiber will
continue to shine in water and gas filtration uses in response to clean water and air initiatives.
Growth in traditional apparel and home fashion uses is limited at best. A slightly decreasing
production pattern is predicted by 2010, and acrylic is probably heading for serious decreases in
production in the second decade.


Viscose-based cellulosic fibers lead the race to oblivion. Lyocell offers an environmentally
attractive substitute to traditional viscose and, to the extent that producers want rayon, lyocell
will expand and satisfy this need. The costs and risks of viscose are too much for an
environmentally aware economy to bear. World production of cellulosics is concentrated in Europe
and China. Europe is closing viscose operations, and China likely will follow suit under
environmental pressure from World Trade Organization members. Alternatively, there may be
increasing emphasis on cotton or, most likely, higher-level blends of polyester with cotton,
thereby stretching the available cotton supply and absorbing the expected deluge of polyester, both
filament and spun.


Nylon, the granddaddy of man-made fibers, seems to be losing share to polyester, overwhelmed
by sheer volume if not performance. In carpets, staple nylon gradually is being replaced by
filament; tires increasingly use polyester over nylon; and many woven industrial and apparel
fabrics seem to favor polyester. Nylon’s dyeability is an advantage, but not sufficiently so to
overcome the supply and variants available in polyester. Nylon is on a cusp.

The recent purchase of INVISTA™ Inc. by Koch Industries Inc., Wichita, Kan., from DuPont,
Wilmington, Del., leaves Invista yet to establish a market identity beyond apparently continuing
the DuPont technological advantage mantra. Koch has proven a quality steward of the polyester
assets acquired from Hoechst AG, Frankfurt, and is expected to manage these new nylon assets with
similar conviction. Time, likely two to three years, will tell. 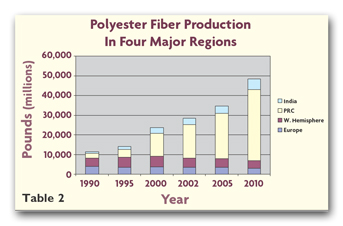 
In 2002, Europe and the Western Hemisphere produced approximately two-thirds of world olefin
supplies (not including cigarette tow), with China adding an additional 17 percent. Olefin is a
fiber of home and industrial utility, somewhat out of the view of economies intent on increasing
employment through garment manufacturing. Generally, polypropylene in carpets and disposable diaper
cover stock appeals to industrialized economies that have moved beyond the subsistence level of
Abraham Maslow’s Hierarchy of Needs. As Asian economies improve from the problem days of the late
1990s, it is expected they will increasingly embrace polypropylene-containing textile materials,
possibly starting with geotextiles to create additional infrastructure and arable land for
foodstuffs.


Polyester is king. As recently as 1990, world polyester production (filament and staple)
totaled 20 billion pounds. In 2002, production had more than doubled to more than 46 billion
pounds. The world man-made fiber industry shipped more polyester in 2002 than it had shipped in
total product 12 years earlier. And this increase forever changed the world map of fiber
production. In 1990, the West and Europe accounted for 43 percent of total world polyester
production. By 2002, the balance had shifted dramatically. First, South Korea made a run at first
place in the 1990s, but lately it appears to have reduced its ambitions. Taiwan maintains a posture
similar to that of Korea. The big player obviously is China. Polyester production in China grew
from a 12-percent share of a 19 billion-pound market in 1990 to 37 percent of a 46 billion-pound
market in 2002. This rate (20+ percent compounded annually from 1995 through 2002) cannot be
sustained, and it is projected that China will produce approximately 36 billion pounds of polyester
in 2010, a 10-percent annually compounded rate of increase from 2002. This effectively will force
the rest of the world to limit polyester production to rates similar to those of 2002.

India has adopted the Japanese Ministry of International Trade and Industry (MITI) model of
industry and government cooperation in fibers, textiles and apparel. According to reports, the
program is just reaching the commercial phase. It appears there will be a competition between India
and China in polyester fiber manufacturing. Countries with smaller commitments to polyester will be
squeezed as these two goliaths meet each other in the marketplace of commodity staple polyester.

This brush with commodity appears to be the underlying strategy behind India-based Reliance
Industries Ltd.’s purchase of Trevira GmbH & Co. KG, Germany.
(See ”
Textile
World News,”
TW, August 2004). In announcing this purchase, Reliance, a (if not the)
player in the Indian textile and apparel complex, adds a world-recognized brand to its stable of
polyester products. Reliance also is constructing several new facilities to raise its capacity to
almost 4 billion pounds, which by itself will increase India’s world share by more than 7 percent.

With a total world market approaching 65 billion pounds by 2010, competition for market
share will be intense, with oil prices pushing up the bottom and a world fiber market squeezing
down the top.


It should come as no surprise to

TW
readers that the production geography of man-made fibers has changed dramatically in the past
two decades. Long the preserve of Europe and the United States, fibers now are produced worldwide,
with recent emphasis on a few Asian economies, particularly China, Taiwan, South Korea and, most
recently, India. In 1990, Europe and the United States controlled 58 percent of man-made fiber
production. By 2002, that dominance had dwindled to 33 percent, and an even lower position of 23
percent is projected in 2010. In the late 1990s, Japan reduced its production of man-made fibers.
Korea grew through the 1990s but recently has scaled back.

Most growth comes from polyester expansions in India and China. In 1990, China represented
barely 8 percent of total man-made production; by 2002 it produced almost 30 percent, almost a tie
with the combined total of the United States and Europe. Simultaneously, India began a program
aimed at achieving a dominant position in fibers, fabrics and garments. India’s government
established commerce councils similar to Japan’s MITI aimed at strengthening and assisting
investment in textile and apparel operations. From a virtually nonexistent position in the 1990s,
India currently produces 5+ percent of the world’s supply of man-made fibers, with programs in
place to expand this further. This is small compared to the position of China, but it starts with
only small positions in acrylics and nylon, and a probable diminishing position in cellulosics; and
it represents radical growth focused almost entirely on polyester.

In 1990, world polyester production totaled 19,131 million pounds; the four regions of
Europe, the Western Hemisphere, China and India produced 59 percent of the total
(See Table 2). Over time, polyester production in Europe and the West has slipped, while
China and India have engaged in a pitched expansion battle. In 2002, China manufactured 37 percent
of all polyester fibers produced in the world and that is projected to rise to more than 55 percent
by 2010.

The world of polyester production begins to resemble a monopoly, led by China. Give India
credit. It is proceeding with its expansion plans, almost doubling capacity and production in the
next decade. Unfortunately, the China colossus is so large that, while India is achieving critical
mass for its fabric and garment ambitions, it is hard-pressed to reach a 10-percent share of world
production. It is likely, however, that India will earn a strong second place.


The speed with which Asia has dominated fiber production is astounding. The commitment is
complete, and the world man-made fiber industry will never be the same – and that’s not necessarily
a bad thing. It is obvious that production asset investments of the recent decade are world-class
in efficiency and quality – with the world consumer receiving the benefits. The industrialized
world must move on to a higher-return economy and let the developing world be satisfied by lower
returns on investment, either through lower labor or local funds costs; or government-subsidized
manufacturing aimed at employment, and/or accumulation of strong currencies to be used for
continued economic development. Either way, the new nexus of the man-made fiber business is Asia.