I
n late December 2003, the Bush administration concluded talks on the Central American
Free Trade Agreement (CAFTA) with Honduras, El Salvador, Nicaragua and Guatemala. The on-line
newspaper Honduras This Week (12/22/03) reported: “[A]t the last minute, Costa Rica withdrew from
the negotiations, meaning the [Costa Ricans] will have to negotiate on their own next year. … The
event is considered by Washington [to be] a step towards the creation of a free trade zone in the
Americas. … It is foreseen that the presidents of the region will sign the agreement in April and
that the White House [will send it] to Congress for [approval] before July, to avoid the process
[being] politicized by the upcoming November 2004 elections.” 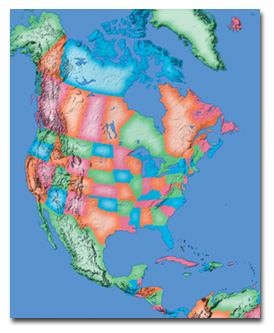 Congress granted the president trade promotion authority (TPA), commonly known as fast track
authority, in August 2002. TPA permits the executive to negotiate trade agreements with nations and
submit them to Congress only for an up or down vote; i.e., as is, no changes. Long denied to
President Clinton, TPA has encouraged the current administration to pursue a free trade agenda in
the Western Hemisphere, creating North American Free Trade Agreement (NAFTA)-like preferences with
all Western Hemisphere countries. On Aug. 1, 2002, President Bush announced: “With TPA, we will
open markets to create high-paying jobs and provide new opportunities for America’s farmers and
workers. I thank the House and Senate for passing TPA so that we can work together to advance
America’s free trade agenda [and] promote prosperity in the United States, progress in our
hemisphere and freedom throughout the world.” With the authority in hand, the administration has
focused on opening Central and South American markets, leading to a Free Trade Area of the Americas
(FTAA). Like it or not, the current administration is bent on increased trade. It is combining the
theories that the rising tide lifts all boats and, that manufacturing, in order to be competitive,
needs to chase lowest-wage-cost economies. In so doing, the administration appears determined to
trade manufacturing jobs for increased opportunities for US companies to export technology and
knowledge. “Fair” probably is not in the lexicon; “free” is, and one at a time, jobs in low-wage
industries will be outsourced to countries with lower-labor-cost competitive/advantaged economies.

The steel industry recently learned a harsh lesson. Granted protective tariffs in early
2002, steel promised to upgrade to a world-class industry. The promise probably was hollow
-designed to allow steel producers to dress up poor income statements, balance sheets and stock
prices. The threat of European Union sanctions under World Trade Organization (WTO) rules likely
sandbagged the duties from day one. The results  were protective tariffs on steel, and the
elimination of a number of steel industry jobs sacrificed on the political altar of trade.
Objectors to FTAA likely will face the same results.

Given that the political climate favors free trade, and the Senate is expected to endorse
CAFTA, it’s time to look at the region that now is receiving recognition. In order to understand
it, a number of questions need to be answered: How big is it? How big is the textile portion? What
opportunities exist for current North American fiber and fabric manufacturers? Is there a
possibility for fiber expansion as the region “grows,” based on more open trade with the United
States? What is the fiber business in South America? Are labor rates world-competitive? And what
kind of market are we now asked to service and participate in?


Just as the United States is not a single, massive economy, South America is not a monolith.
The continent is characterized by both developed and underdeveloped nations, with significant
differences between the areas. Historically, Brazil, Argentina and Chile have been regarded as the
most-developed economies, with conditions in the remaining countries ranging from abject poverty to
verging on developing. It is reported that poverty affects less than 5 percent of the populations
in Chile, Brazil and Argentina, while most of the remaining South American countries face poverty
levels in the 15+ percent arena. This seems to suggest no lack of available labor. Trained and
educated labor is another issue, but it probably is fair to say that with local government
assistance, “trainable in time” is applicable.

Investor confidence in Latin America was dealt a blow by Argentina’s recent economic crisis.
According to worldinformation.com, net external capital flight totaled 18 percent of Argentina’s
gross domestic product. This represented 50 percent of the region’s net capital outflow and had a
disastrous effect on the overall economic performance of the continent. Argentina’s relationships
with Uruguay, Brazil and Chile were injured through common membership in the regional Mercusor
trade bloc. Brazil and Venezuela suffered political unrest – the former through election of a
left-wing president and government, according to worldinformation.com. The latter, Venezuela,
experienced continuing confrontations between the government and opposition forces, which led to
severe cuts in oil output and a lengthy 2002 year-ending general strike.

It is clear that political and currency risks abound in South America. However, are textiles
better off by hunkering down in the United States to be eroded gradually by expanding trade
policies, or should the industry undertake harsher measures, including changes in traditional
business methods? Alliances/ownerships/development consortia are needed. If US firms do not open
South American markets, it is likely that European competitors will lock up the distribution
through NAFTA-like arrangements, most of which will not favor US interests. 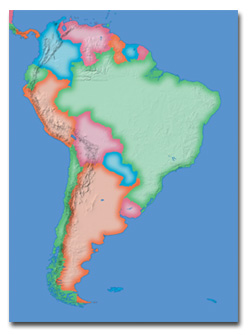 
As noted previously in

Regional fiber consumption mirrors politics. The historical participants – Chile, Venezuela
and Colombia – still are active, but now they are shadowed by major fabric-forming investments in
Argentina and Brazil. Peru, Ecuador and Uruguay bring up the rear with small textile industries.
Virtually all of the fiber consumption decrease in 2002  fell at the lap of Argentina, whose
usage fell 6 percent from 2001 levels – which represented a 33-percent drop in the decade
(See Table 1).

Obviously, Brazil is the 800-pound gorilla in South American fiber consumption. The
importance of cotton is apparent, and the growth potential for man-mades is unstated. The focus is
on apparel to utilize the relatively inexpensive labor available in many South American nations.
However, the future of South American expansion relies heavily upon foreign investment. Despite
defining themselves as industrialized, Argentina, Chile and Brazil do not generate sufficient
investment capital to develop their neighboring states. For example, according to
worldinformation.com, in 2002, “Capital flight and poor external markets combined with increased
political risk [dragged down] the region’s prospects. The GDP of [the area] contracted by 0.5
percent … inflation rose to 12 percent, double that of 2001. … Real wages fell 1.5 percent
while unemployment increased to 9.1 percent. … Non-oil economies were hit further by high oil
prices, leading to a severe deterioration in the region’s … trade. … At the same time, capital
flight saw nearly $40 billion drained out of the regional econom[ies] … leaving [highly
vulnerable economies] little room to manoeuvre [trade] policy.” 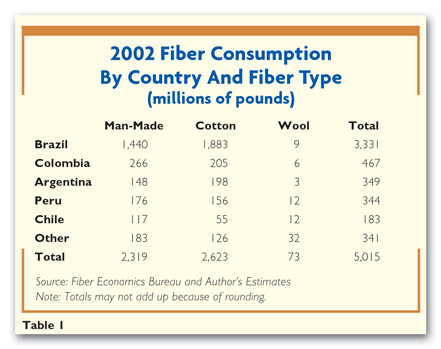 
What are America’s strengths? Investment, ideas and a willingness to take risks. What are
manufacturing America’s weaknesses? High wages vis-à-vis the levels in developing economies,
increasing social costs for employees and the environment, and a government obviously intent on
finalizing the conversion of the economy from a manufacturing base to a knowledge base. Long-term,
these goals likely would result anyway from natural long-term economic forces. NAFTA, the WTO and
CAFTA merely are accelerating the natural trend of industrialized economies to push services and
knowledge at the expense of manufacturing.

Given that public policy is pushing away manufacturing, what is the textile industry to do?
Arguably, NAFTA has been successful in helping Mexico develop a consuming middle class. It appears
that the increasing tide of trade did raise many, if not all, boats. It can be argued that much of
the last five years of restructuring in the US fiber industry was facilitated by Mexican
involvement. If Mexico, with 100 million people, can impact NAFTA that much, imagine what a
consortium of South American textile and fiber manufacturers can do under FTAA, fueled by US
technology and access to capital, as well as access to the US market with garments and made-up
articles assembled by relatively low-wage, currently poverty-stricken workers in the South American
continent.

It is doubtful that CAFTA will pass the Senate with ease. The current political silly season
virtually guarantees a battle over CAFTA. Based on the chastising received from the WTO on steel,
however, it is doubtful the administration will fold. Its stance on trade is too strong, and the
Bush dream of FTAA verges on a legacy accomplishment. Can textiles find partners below the equator?
The US textile industry has a risk-laden history. Can it – will it – investigate spreading the risk
further south to begin the industry’s transformation into a truly global enterprise?

Carly Fiorina, CEO of Hewlett Packard, recently talked of jobs: “There is no job that is
America’s given right. We have to compete for jobs.” Is the textile industry competing for jobs? It
is clear no textile job is a given right; can the odds be improved by investing time and
intellectual and investment capital in a region that is likely to become the next NAFTA-like
incarnation?