Fiber WorldBy John E. Luke Industry ActivityLast year’s performance demands decisions and action for survival in 2002. In the wake of the moral and economic shocks suffered by the United States since September 11, it appears time to return the focus of Textile Worlds Fiber World feature to the distribution patterns in the fiber and fabric industries and to provide a look at the preliminary results of textile industry activity in 2001. Industry performance last year seems to point to even more survival decisions for 2002 and beyond. A Point Of Comparison 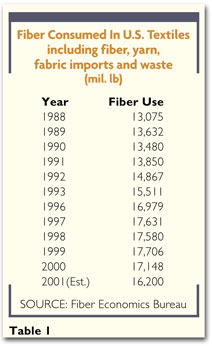 Traditionally, industry activity has been explored as a stand-alone process without detailed comparisons to other periods. The pace and depth of activity in 2001 suggests methodology may be lacking. An interesting correlation of trends appears to exist between the recessions of 1989/1990 and 2000/2001. This report will focus on 2001 as part of a greater cycle 1996 to 2001 comparing industry activities and opportunities to those from 1988 to 1993.The year 2001 was set apart by the horrific September events superimposed upon an economy struggling to stay afloat after a dozen years of prosperity. Granted, textiles did not always share that prosperity, as additional exogenous events forced competing economies into socio/political/economic decisions that changed the world platform for textile and apparel manufacturing and distribution. Given this aggregation of economic forces, the traditional stand-alone methodology will be broken in order to understand 2001 by trying to deal only with those actions induced by events over which the textile industry might have some control.Many textile spokespersons focus on imports in describing the ills of the U.S. textile economy. Imports are a problem that will not go away. Industry leaders, pundits and observers can rail against executive and legislative government as they appear to sacrifice textiles on the altar of trade, but the die is cast: the textile industry has overstayed its welcome at the trough of protectionism. The apparent reluctance of at least part of the industry to employ modern management approaches and its very reliance on entry-level employment encourage government to jump to politically expedient conclusions. Survival now demands decisions and actions through which the industry will find products and distribution channels somewhat less susceptible to foreign incursions.Many events are burned into our memories of textiles in 2001: September 11; the recession; increasing imports of garments and made-up items; mill closings; layoffs; and hundreds of smaller individual hurts. It is sometimes tempting to ask what else can go wrong. The lesson from our countrys history is not to focus on the bad, but to examine events, determine their causes and provide solutions that preempt repetition.There is an interesting correlation between Textiles 2001 and Textiles 1990. Both years are characterized by stagnant/decreasing textile activity in a national economy of the same description. The interesting view comes by examining the paths textiles took into and out of each recession and the structure of the industry in and after recovery. Table 1 outlines total fiber consumed in U.S. production of four major end-use categories: apparel; home textiles; floor coverings; and industrial and other consumer-type items. The data reflect only items manufactured in the United States, but also include raw material fibers and fabrics imported for inclusion in these items.The first notable message in Table 1 is the almost catastrophic usage estimate for 2001. Preliminary Fiber Economics Bureau (FEB) data for domestic consumption, plus traceable imports of fibers, fabrics and waste, paint a grim picture for U.S. textiles. Statistical and anecdotal evidence has been accumulating for years, although the industry has until recently continued to report increased total fiber consumption. It appears that a change, probably one necessitating fundamental revisions in goals and strategies, is about to descend upon American textiles.The important information from Table 1 lies in subtracting domestic shipments from total consumption to note how fiber and fabric imports add to the pressure already caused by imported garments. In 1988, fabric and fiber imports totaled 452 million pounds. As U.S. industry rallied from the 1989/1990 recession, 1993 fiber and fabric imports had risen to almost 1.5 billion pounds. By 1996, fiber and fabric imports had jumped to 2.27 billion pounds and were starting a rise to almost 3.0 billion pounds estimated in 2001. Distribution ChangesAn even more interesting pattern emerges when the data in Table 1 are graphed (See Figure 1). The U.S. textile industry has worked through the 2000/2001 recession in a manner almost identical to that in which it survived the 1989/1990 experience. In each period, fiber use rose approximately 4 percent in the year preceding the recession and declined about 1 percent the next year. In the third year, industry shipments rose again: 1991 exceeded 1990 by 2.7 percent and 1999 beat 1998 by slightly under 1 percent in retrospect, a sign of impending change.Unfortunately, the two graphs now begin to diverge, definitely foretelling a fundamental change in U.S. textiles. Domestic fiber usage stagnated in the 1988/1991 period at approximately 13.5 billion pounds, finally rising above 14 billion pounds in 1992 and above 15 billion in 1993. Recovery was at hand. In the 1996/2001 period, domestic shipments rose from 14.7 billion in 1996 to 15.2 billion in 1998, and then industry began to derail. 1999 industry consumption dropped to 15.1 billion; in 2000, consumption declined to 14.6 billion pounds. Through 1999, total industry consumption rose, with the domestic shortfall satisfied by imports. From 1996 through 2001, imported fibers and fabrics captured 500 million pounds of the U.S. market while from 1998 through 2001, the recession cost U.S. producers 1 billion pounds. 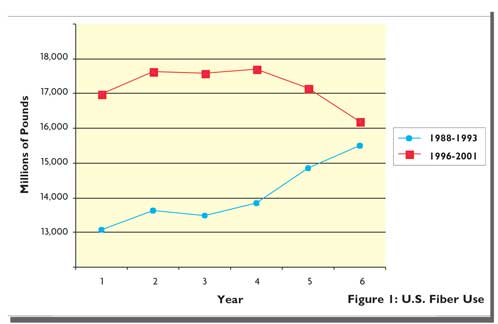 2001For textiles, 2001 will prove to be a watershed year. The industry must decide how to operate in a national environment likely unsympathetic to pleas for continued protectionism.In the data shown in Table 2, 14 percent of 1999 usage, 15 percent of 2000s and 18 percent of 2001s are estimated to come from imported fibers and fabrics. The losses in home fashions and carpet markets are logical, given changes in housing starts in the recession. One can rationalize the drops in industrial market distribution, although the gross numbers cover some important details, which are partially revealed in labor productivity statistics (See OTEXA Data Reveals Export Opportunities, ATI, November 2000).Fiber use in nonwovens has risen almost 20 percent since 1996. Measuring industrial markets by pounds is not entirely accurate because many traditional knitted or woven structures are being replaced by generally lighter, nonwoven substitutes; the actual loss to traditional weaving mills is larger than poundage comparisons reveal.The real issue comes down to apparel. The labor sensitivity of apparel is driving manufacturers to Southeast Asia, but the U.S. apparel business will not disappear. The question becomes: how far down will fiber usage fall before a much smaller, more nimble base industry begins to emerge And, more importantly, who will remain For various reasons, home fashions, carpet and industrial end-uses are substantially less vulnerable to imports than is apparel, and they have provided cover for lost apparel sales. However, there are limits to the size of home fashions and carpet apparently, current levels. Lacking a serious breakthrough in industrial fabric technology, industrial growth seems limited. The 2001 fiber performance, supported by the plethora of layoff and mill-closing announcements, shows there is scant room for some current apparel fiber and fabric suppliers to crawl into home fashions, carpet and industrial markets. 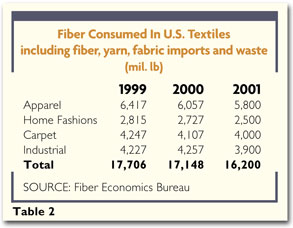 How To SucceedIf textiles does nothing to stem the loss of textile and apparel production and jobs, the losses will continue. The World Trade Organization (WTO) takes its final steps onto the stage in less than three years. Quotas will disappear and the full trade weight of economically ambitious developing nations will focus on the United States. Political decisions have displaced economic selection processes in trade. Analysis of exports by U.S. manufacturers must conclude that the playing field is not level now and will become less so with full implementation of the WTO. Certain markets are difficult to enter or are closed to U.S. manufacturers, despite the reverse being open.Market strength built on knowledge is an answer, implemented by joining with more countries in North American Free Trade Agreement (NAFTA)-like trading plans. The European Union (EU) has formed a rigid trading bloc, and Asia appears to speak with a single voice. In contrast, the United States, the object of desire for every exporting nation, sails alone. Arguably, NAFTA has increased trade among the participants. Taking advantage of shorter lead times, Mexico has replaced China as the single largest exporter of apparel to the United States, although shipments from the total Asian region continue to dominate. Mexico probably has gained more from NAFTA than has the United States, but this is a natural consequence of a capital-goods nation trading with a labor-capital nation. The United States ships raw material; trading partners add labor value and return finished product.Can the United States bring Central and South America into the NAFTA model Does the United States gain any advantages by joining with additional Western Hemisphere nations Answers must be viewed with a long-term perspective. Rather than expend political capital defending politico-trade skirmishes in the WTO, should the United States strive toward associations that grant greater voice and strength in trade The United States, as the center of a trade association in the Western Hemisphere, surely carries a larger stick than it would alone. While the political impact of this strategy should be almost immediate, it will take years to identify, train and operate large-volume, labor-sensitive manufacturing in the developing nations of Central and South America. Economic gains can be visible early, though. Once negotiating progress is apparent, companies will act to uncover benefits, customers, trade-encouraging policies, improved infrastructure and other advantages. Time’s A-Wastin’Time is of the essence. If the United States is to expend political capital, there must be a rapid move to enjoy the fruits of its labors. Should the United States not encourage trade in its backyard to add to the regions voice and economic strength Europe and Asia are feverishly trying to negotiate trade pacts with Central and South American nations. It is certain these compacts will not favor the United States and might preclude future U.S. participation. The House of Representatives passed a resolution granting the President trade promotion (fast-track) authority. Similar legislation is inching through the Senate, scheduled for March discussions. If this nation wants to affect change, should pressure not be applied to areas where change is possible and long-term benefits can be offered Railing against the WTO will generate marginal changes; changing the balance of power by endorsing and promoting NAFTA expansion will force more decisions that favor the United States. As well, it is important not to lose sight of what business were in. Just moving a weave shed to Peru doesnt improve competitiveness. Exporting capital and knowledge, the strengths of the U.S. industry, can improve the supply chain between the United States and a Southern Hemisphere trading/manufacturing partner.Product economies gradually evolve to service economies. Using capital creatively, the United States should convert some equities, knowledge particularly, into service activities. U.S. industry can use its expertise in distribution to attack the all-too-long apparel supply chain. Put the weave shed in Peru next to a dye house, export across the land bridge of Central America or through the labor economies of the CBI region, employ and ultimately sell to a new customer. This adds service to the equation, takes the U.S. textile industry beyond a pure manufacturing mentality, and makes it competitive and a survivor.Editors Note: John E. Luke is owner of Five Twenty Six Associates Inc., Bryn Mawr, Pa., a consulting firm specializing in strategic marketing and operations facing textile fiber and fabric manufacturers. He is also a professor of textile marketing at Philadelphia University, Philadelphia.March 2002