Will Productivity Save U.S. Textiles
Shedding light on the battle between U.S. manufacturing efficiency and textile importsA
recent article in the
Wall Street Journal (WSJ), The Welch Legacy: Creative Destruction, pays obeisance to the
20-year reign of Jack Welch at General Electric (GE). The author posits that Mr. Welchs true legacy
is changing the GE culture from being operationally sensitive to being capital-sensitive through an
almost religious dedication to the gales of creative destruction described in the 1930s by the
Austrian-American economist, Joseph Schumpeter.Welch and Schumpeter argue that a company
continuously must reinvent itself to create a corporate atmosphere in which the internal rate of
change matches or exceeds the rate of change in capital markets. This external pressure is more
important than constant application of assets to improve efficiency against some arbitrary
yardstick, and it offers growth industries opportunities to share in the distribution of wealth
assets.Welch recognized that destroying ones businesses or knowing when to let go of them and move
in another direction is a far surer way to protect what youve built, regardless of how grand,
Richard Foster wrote in the Journal. Corporate life is driven by the contradictions of survival; it
cannot succeed without excellent operations, but it will fail if it focuses primarily on operations
(Foster,
WSJ). The corporation is afflicted with the survivors curse, operational efficiency at
virtually any cost, including exclusion from market-driven efficiencies of capital allocation.
Control processes, designed to ensure the continuity of operational efficiencies, deaden
[corporations] to the need for change (Foster,
WSJ).Capital markets are built on assumptions of discontinuity; their focus is on creation
and destruction (Foster,
WSJ) of providers of products and services desired by the consumer. The market allocates
capital to those industries and companies that offer returns exceeding the costs of capital, and
corporations are rewarded when they provide internal returns exceeding the returns on capital
available in the external market. The corporate challenge is in managing to achieve rates of change
the same as or larger than the rates of return on capital external markets.Surveying the
textile/apparel complex against a Schumpeter/Welch backdrop suggests that while many resources have
been spent performing existing activities in an efficient manner, few resources are expended on
efficacy or effectiveness, the throwing out of old habits and replacing them with
new. Industry ProductivityTo understand this efficiency/effectiveness dichotomy, several years
have been spent trying to build a Productivity Index able to measure the textile industrys ability
to improve labor efficiencies to stave off continued import incursions. The starting hypothesis was
that an inverse relationship exists between the volume of imports and the efficiency with which the
domestic industry converts raw materials into finished products. To this end, Bureau of Labor
Statistics data were used to calculate the amount of labor dollars involved in converting total
domestic fiber consumption (domestic production plus imports of fiber) into textile mill products
(SIC 22) and divide the total dollar amount by total fiber consumed as reported by the Fiber
Economics Bureau.The resulting product indicates the number of labor dollars required to convert
one pound of fiber into a finished textile mill product. As this indicator shrinks, it should
herald a victory of mill efficiency over imports. The challenge is to find the level of efficiency
that holds imports at bay. This hypothesis led to the relationships detailed in Table 1.It is
accepted as gospel that the U.S. textile and apparel complex is drowning in imports from all over
the world, particularly from Southeast Asia. The North American Free Trade Agreement (NAFTA) has
performed as expected in diverting imports from Asia to Mexico, but the basic fact of a deluge of
imports remains a major issue. To be sure, the amount of apparel imports has increased
dramatically, followed closely by fibers and fabrics from corners of the world anxious to advance
their standards of living with cheap labor. Unfortunately, there is little the industry, or even
the broader U.S. economy, can do to change international wages as countries exporting to the United
States use apparel to accumulate hard currencies and trade surpluses on the backs of labor. Is
efficiency the way to compete, or should the creative destruction strategies of Welch and
Schumpeter be explored 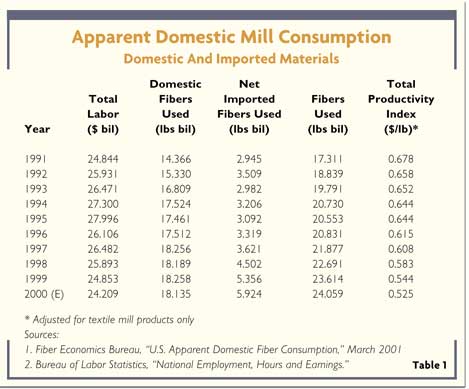 Labor CostsSeveral relationships, which can serve to open the creative destruction
dialog, leap out of the Productivity Index database. First, total labor costs in the U. S.
textile/apparel complex have not risen significantly in the past 10 years. Total dollars did rise
in response to mid-1990s economic exuberance, but they settled back to historic levels late in the
decade. As an aside, the labor statistics are not corrected for inflation, so the industrys real
wage costs, in fact, have fallen in the period.Simultaneously, U.S. fiber and fabric manufacturers
have performed yeoman service in decreasing the unit cost of labor to produce a pound of fiber and
convert it into fabric. The U.S. Productivity Index dropped 22+ percent, from $0.678 per pound of
conversion in 1991 to $0.525 per pound estimated for 2000, a compounded average of 2.88 percent per
year. It must be noted that some of this improvement results from changes in product mix measured.
For example, the amount of woven materials included in the index has decreased over time, while the
amount of nonwoven materials has increased dramatically.Conversely, the amount of home fashions and
industrial materials has grown, while the quantity of fabrics produced for apparel has decreased
during the period. As a general rule, home fashions and industrial materials are run in smaller lot
quantities than apparel, often have more complex patterns and structures than those designated for
apparel, and, resultantly, require higher amounts of labor than traditional large-quantity apparel
materials.Fiber consumption in textile mill products for the non-carpet fashions market area have
risen 19 percent since 1991. This rate has slowed in recent years in response to market saturation
and a slowing U.S. economy. Similarly, fiber consumption in the production of industrial textile
mill products has risen 36 percent, but it also is slowing in response to the same pressures that
are slowing home fashions.Unfortunately, there is precious little data available to adjust the
index for product mix; it is assumed that these variables tend to offset, and comment is based on
the index in its raw form. In any case, it is absolute that the labor cost to convert one pound of
materials into textile mill products has decreased significantly in the past 10 years.It should be
noted that, while the Productivity Index shows recent mill efficiency improvements, the index
cannot continue to fall indefinitely. At some point, the investment needed to decrease labor costs
an additional unit will exceed the savings obtained by eliminating that unit. Continued improvement
will fall victim to the limits of decreasing rates of increase. Rising Domestic Fiber
UseSecondly, surprisingly, the use of domestic fibers in domestic mills continues to rise. Current
readings in some of the trade press could make a reader believe that everything textile was
imported. Quite the contrary, domestic mill consumption of domestically produced fibers has risen
26+ percent, from over 14 billion pounds to slightly over 18 billion, a 2.62-percent annual
compounded rate. True, net imports virtually doubled in the same period, from 2.9 billion pounds to
over 5.9 billion estimated for 2000, but some of this increase is offset by domestic manufacturers
changing product mix offerings and producing the new items more efficiently.Imports have taken two
paths to the current level. From 1991 through 1996, imports grew at an annual rate of 2.4 percent,
a level probably appearing sufficiently small to be manageable. From 1996 through 2000 however, the
rate skyrocketed to a 15.6-percent increase in annual rates. It appears that U.S. manufacturers
used efficiency programs to effectively hold imports to modest growth, until the Asian currency flu
hit in 1997 and the Tiger Nations attempted to export their way out of crisis. It appears that no
manner of efficiency improvements would deflect the political/economic decisions of exporting
nations to avoid a countrys failure by exporting, which keeps people employed and enables the
accumulation of hard currencies needed in world trade. A Case History

At the recent Springs Industries annual meeting, Chairman and CEO Crandall Bowles cited some
interesting productivity statistics. In 1966, the year Springs went public, the company generated
approximately $266 million in sales from 19 plants with 17,000 employees. This year, as the company
reverts to private ownership, revenue nears $2.3 billion from 41 plants using the same number of
employees. Using a traditional industry measure, 1966 sales per employee were $15,647; in 2001 the
measure reached $135,294, a 765-percent increase. Adjusting this calculation for inflation still
yields an impressive statistic.Since, in 2001, $5.48 buys one 1966 dollar (U.S. Bureau of Labor,
Statistics Inflation Calculator) the adjusted Springs efficiency still tops 57 percent, well ahead
of the change predicted by the Productivity Index. This certainly points to Springs dropping less
profitable lines and adopting/developing products with better returns. ConclusionsThe
Productivity Index shows clearly what the textile mill products industry has been able to
accomplish in reducing labor costs to improve world competitiveness. Unfortunately, it is a logical
calculation, and it is somewhat insulated from the economic/political pressures surrounding import
strategies. As such, it is not yet a valuable test of the textile industrys ability to improve
through efficiency, and it does nothing to lead us to efficacy.However, one major conclusion of the
Productivity Index appears to be a very strong suggestion that mill closings and labor losses are
as much a result of improving mill efficiencies as they are of imported products, particularly
apparel. If this is the case, it may be that continuing to improve mill efficiency is a
self-defeating goal. True, if imports did not exist, more mills would be open and more people would
be employed. Unfortunately, this is an unrealistic view of the world. Imports soon will accelerate,
prompted by full implementation of the World Trade Organization, and the situation will only get
worse. Textile mill product producers have continued to lose market share and business by
continuing to focus on efficiency to save them.How long will it take before the industry accepts
the admonitions of Welch and Schumpeter to change the business and weed out the old and invest in
the new Be honest in asking, What business should we be in What business will generate internal
rates of change consistent with the rates of change in capital markets Just because you produce a
certain product mix does not mean that mix will or can carry you in the future.Investment is
difficult without significant cash flows to support new technologies. The industry appears to be
nearing extremes from which no amount of investment will rescue it. Its expensive and risky to
invest, but it is fatal not to invest. A good industry is facing death on the back of efficiency if
it does not escape to the safety of the arms of efficacy.
Editors note: John E. Luke is owner of Five Twenty Six Associates Inc., Bryn Mawr, Pa., a
consulting firm specializing in strategic marketing and operations facing textile fiber and fabric
manufacturers. He is also a professor of textile marketing at Philadelphia University,
Philadelphia.