Let me begin by saying what an honor and privilege it is to assume the role of Chairman of the National Council of Textile Organizations (NCTO) after David Roberts stepped down in November.

We all faced a litany of challenges in 2021 but I am proud to stand here today and say that our industry’s resilience and innovative spirit pulled us through and put us on a path of growth.

If 2020 was a year marked by an economic downturn and once-in-a-generation pandemic and health crisis, 2021 was defined by a rebound of remarkable proportions in our industry, nearly on par with the performance of pre-pandemic levels in 2019.

As we are all aware, the headwinds from global supply chain disruptions, rising material costs and labor shortages were strong, but the U.S. textile industry still managed to have a solid year in 2021. Overall, our industry’s performance and growth last year far outpaced the previous year of 2020, and we remain cautiously optimistic.

NCTO has been highly engaged in working with the Biden administration and our allies in Congress to achieve key policy priorities, and we succeeded on many fronts in 2021. 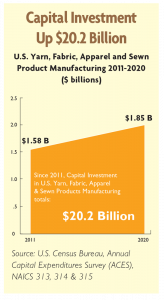 I would like to sincerely thank our staff, led by NCTO President and CEO Kim Glas, as well as our industry leadership for navigating these difficult times and partnering with the administration and key congressional offices on critical policy priorities that impact our daily operations.

As a result of our amazing advocacy efforts, NCTO can point to a long list of accomplishments, ranging from strengthening the Berry Amendment for military contracts to coordinating with agencies on nearshoring and onshoring opportunities and amplifying investment in the hemisphere, fending off proposals to weaken the yarn forward rules of origin in the Dominican Republic-Central America Free Trade Agreement (CAFTA-DR) and helping secure government contracts to continue producing lifesaving PPE during this ongoing healthcare crisis.

Last month, many of you participated in a number of Zoom calls with House and Senate leadership and with our congressional footprint. Your participation in these discussions matter and are critical to pushing our issues collectively.

Many thanks to the entire NCTO staff for this enormous effort and to all the NCTO members who participated in these critical discussions.

Before laying out NCTO’s policy wins in 2021, I want to quickly recap how the industry fared last year. 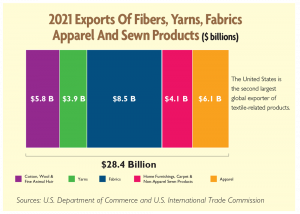 We began to bounce back strongly from the COVID-19 pandemic in 2021.

The metrics for our industry were strong last year, as business rebounded from the downturn in 2020.

We saw a return to solid growth in our industry and the U.S. manufacturing base as a whole in 2021.

Economic activity in the U.S. manufacturing sector grew in December, marking the 19th consecutive month of overall economic growth, according to a closely watched survey.3

Of the 18 manufacturing industries, textiles and apparel was among the 15 sectors that reported growth in December.

Made in USA production is strengthening as you can see from these metrics, and policies in Washington aimed at expanding Berry and buy American rules are contributing to overall growth in American-made products for the military, PPE and federal agencies.

The Western Hemisphere supply chain remained a key driver behind the industry’s growth and remains a vital economic engine for the textile and apparel sectors. 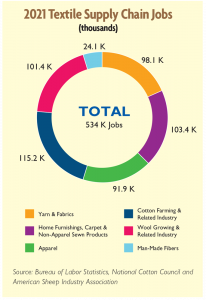 The U.S. textile industry has made a significant commitment to the region, with an anticipated $1 billion in investments in the CAFTA-DR countries this year alone, as a result of the ongoing supply chain crisis that has forced retailers and brands to reconstitute their supply chains out of Asia and nearshore and onshore more production.

We have $35 billion in annual two-way trade with the Western Hemisphere, which supports 2 million direct jobs in the entire supply chain.

I’m happy to say the short-term and long-term trend in trade flows remains positive and strong, despite the headwinds from two years of sourcing disruptions due to the pandemic.

U.S. textile and apparel exports to the Western Hemisphere rose 6.5 percent to reach $16.1 billion in 2021, compared with 5 years ago in 2016. Similarly apparel and textile exports from the Western Hemisphere to the U.S. are on the rise. These exports from the entire region to the U.S. grew by 6.8 percent to hit $19.1 billion over the same time period. 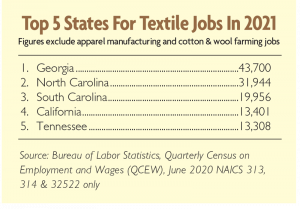 The bottom line is the fundamentals for the U.S. textile industry are sound and a testament to our industry’s resilience in the face of a perfect storm of supply chain disruptions, rising costs and a once-in-a-generation healthcare crisis.

Based on the growth we are seeing in capital expenditures and strengthened partnerships with our Western Hemisphere partners, the industry is well-positioned to continue adapting to expected disruptions and inflationary pressures and capitalize on opportunities in the year ahead.

NCTO was at the forefront of policy debates in Washington last year, advocating on every aspect of critical trade and economic issues impacting our industry’s robust performance and growth.

I would like to highlight a few accomplishments NCTO staff achieved during the year.

CAFTA-DR — NCTO worked tirelessly to thwart a well-funded effort by certain apparel importers to undermine the yarn forward rule of origin in the CAFTA-DR agreement to allow third-party textile inputs from Asia to displace U.S. and Central American-made textile inputs. NCTO engaged directly with the administration and Congress to underscore the importance of strong trade rules to the economic stability of Central America, and secured a public statement affirming the administration’s support of yarn forward.

NCTO will continue to monitor any renewed attempts this year by certain importers to dismantle the CAFTA-DR rules. 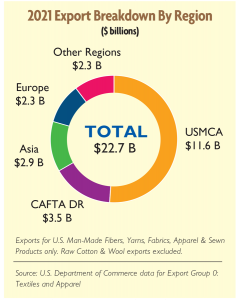 Personal Protective Equipment (PPE) — We all know how critical it is to garner support for long-term PPE government contracts and policies that will expand the Berry Amendment and establish a permanent domestic supply chain.

In 2021, NCTO led efforts and organized a broad coalition of industry and labor unions to push for the passage of the first Berry-like buy American rule for federal procurement of PPE. The Make PPE in America Act, co-signed by Senator Rob Portman and Senator Gary Peters, was signed into law on November 15 and took effect in mid-February.

There are numerous other issues requiring NCTO’s focus and resources, such as amplifying support for the Section 301 case against China’s intellectual property abuses, promoting tariffs on finished products, including apparel and PPE, the need to pass a new Miscellaneous Tariff Bill with immediate retroactivity, and continued engagement with the Hill on preserving a provision that would effectively dose the de minimis loophole for Chinese imports in underlying legislation aimed at improving U.S. competitiveness.

Time simply will not allow for me to go into detail on all these important issues. With that said, please know that without exception, NCTO is highly engaged on every policy matter that affects the U.S. textile industry with the intent of shaping policy determinations in a manner that directly benefits U.S. textile investment, production, and workforce. 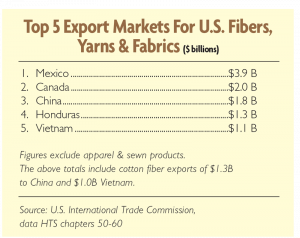 Industry leadership and involvement is of paramount importance. From contributions to NCTO’s TextilePAC to arranging congressional visits to facilities where members of Congress can experience state-of-the art manufacturing first-hand, the industry can make a difference and help raise the level of awareness about its importance to the overall U.S. economy and workforce, and to the local and state economies it supports.

Strong underlying economic fundamentals and expansion in the U.S. and Western Hemisphere in 2021 created a sound business environment for our industry, and we remain optimistic that the business climate will continue this year.

We will closely monitor emerging issues this year, including spiking global fuel prices stemming from the Russian war of aggression on Ukraine and mounting inflationary pressures on consumer products, as well as the multitude of other issues highlighted.

However, if we stay the course and work with our customers and trading partners to mitigate any impacts from the ongoing pandemic and these new headwinds, we believe we can maintain a robust manufacturing environment in the United States.

That concludes my formal remarks. On a personal note, I am honored to serve as chairman of a highly effective organization and dedicated staff, which tirelessly advocates on policies impacting the day-to-day operations of our organizations and this economically vital industry.

I am optimistic about the future, knowing the strength of the industry, buoyed by its incredible trade and lobbying organization in Washington, will overcome emerging challenges and continue to carve out a niche as an important backbone to the U.S. economy and the Western Hemisphere.