NCTO Chairman David Roberts outlined key industry facts and economic data, and recapped NCTO’s PPE and other legislative efforts in 2020 during his “State of the U.S. Textile Industry” address during NCTO’s 17th annual meeting, which was held virtually.

Let me begin by saying what an honor and privilege it has been to serve as Chairman of NCTO   over these past several months.

The year 2020 was marked by a once-in-a-generation pandemic and health crisis that profoundly impacted our businesses, creating challenges and new opportunities that we are still navigating through today and will be confronting for the foreseeable future.

During my tenure, NCTO has had fast-paced engagement with the Trump administration and Capitol Hill — and more recently, the new Biden administration.

This turbulent environment has required constant focus and engagement on the part of our staff and industry leadership to ensure that we effectively partnered with the government to address the emergency needs of our frontline medical providers. 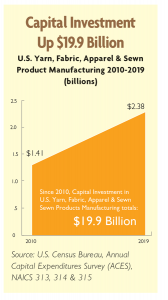 I would like to give special thanks to NCTO President and CEO Kim Glas and her staff for their tireless advocacy and leadership on behalf of our industry. I also want to thank the entire NCTO staff — Sara, Kristi, Todd, Rebecca, Don, Robin and Auggie — NCTO has engaged at every level of the administration and Congress to ensure our industry has a place at the table to provide input on critical policy issues impacting our daily operations.

Perhaps most of all, this past year has demonstrated to Capitol Hill, the White House and the nation our industry’s resilience, know-how and innovation — and the indisputable fact that our government must focus on policies that: support U.S. textile manufacturing jobs and investment; strengthen trade enforcement; expand the Berry Amendment to medical PPE; and build a permanent domestic PPE supply chain.

In fact, many of you have participated over the last several weeks in several Zoom calls with House and Senate leadership and with our congressional footprint. Your participation in these discussions matter and are critical to pushing our issues collectively. As many of you have seen, we have had record attendance in our meetings from Members of Congress who are eager to hear how they can help our industry onshore and succeed moving forward. Many thanks to the entire NCTO staff for this enormous effort and to all the NCTO members who participated in these critical discussions. 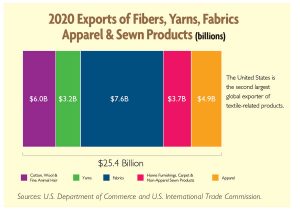 As everyone in this audience knows, the U.S. and global economies were severely impacted by the COVID-19 pandemic, which triggered a deep recession and high unemployment levels in 2020.

The metrics for our industry and the U.S. manufacturing base as a whole, mirrored that of the overall economy, with output falling in the first five months of 2020, but slowly regaining ground in the latter half of the year.

Economic activity in the U.S. manufacturing sector grew in December, marking the eighth consecutive month of overall economic growth, according to a closely watched business survey.

Of 18 manufacturing industries, textile and apparel was among the 16 sectors that reported growth in December, according to the Institute for Supply Management’s manufacturing index. We have also seen these positive trends repeated in the Institute’s January and February surveys this year. 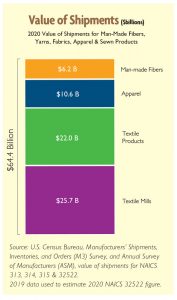 The Western Hemisphere supply chain continues to be a vital economic engine for the textile and apparel sectors.

Last year, we had $28.5 billion in two-way trade with the Western Hemisphere, which supports 2 million direct jobs in the entire regional supply chain.

Taking all things into consideration, the volatility in supply chains and in demand that we saw in the first half of 2020 began to stabilize somewhat in the second half. We began to see increased economic activity and an uptick in demand, pointing to promising signs of a recovery — which was fragile — but steady.

I’m happy to report that, at least anecdotally, business is coming back at a fast clip in the first quarter of this year, as orders continue to bounce back in line with rising consumer demand and retail sales. 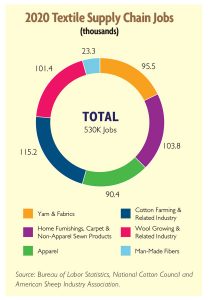 NCTO has been actively engaged in shaping policies in Washington that have major implications for small, medium and large businesses in our industry.

Our staff worked diligently to support the industry’s needs through not one — but four — economic stimulus bills that passed Congress, providing important benefits to businesses and unemployed workers.

Of paramount importance was NCTO’s role in securing a win in the FY 2021 National Defense Authorization Act (NDAA) and helping shape policies and legislation designed to secure a long-term strategy to establish a permanent domestic production base for PPE.

PPE production, pivoting overnight to stand up these production lines and answer the call of the nation.

I cannot stress enough how intensely engaged NCTO staff has been in providing input on PPE policy and legislative development.

We all know how critical it is to garner support for long-term PPE government contracts and policies that will expand the Berry Amendment and establish a permanent domestic supply chain.

NCTO was engaged at every level of government contracting and procurement issues, bringing together the entire domestic PPE supply chain, while also closely coordinating with White House advisers, congressional allies and others to get vital PPE product to frontline workers battling the COVID-19 pandemic.

One bill I would like to highlight in particular is The American PPE Supply Chain Integrity Act, co-sponsored by Congressman Patrick McHenry of North Carolina and Congressman Bill Pascrell of New Jersey, which would expand the Berry Amendment to nearly all federal purchases of PPE.

In addition, Kim testified in several hearings before Congress and the U.S. International Trade Commission, and supplied comments to the administration on the U.S. public health industrial base and necessary policy reforms. 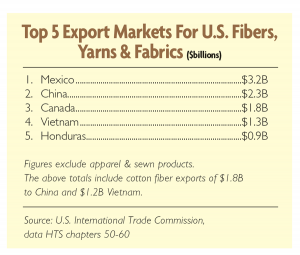 I would venture to say that the vast majority of NCTO members present today are familiar with and benefit from the existence of the Berry Amendment. It is for this reason that NCTO maintains an extremely active Government Textiles Committee that directly engages with our Defense Department and Homeland Security customers, analyzes policy proposals, and supports our advocacy efforts.

I would like to extend my appreciation to the NCTO staff for securing a major, long-sought-after win for the U.S. textile industry in the FY 2021 National Defense Authorization Act (NDAA).

Specifically, we were able to lower the contracting threshold for the Berry Amendment to $150,000 — after it has been raised to $250,000 by Congress in the FY 2017 bill — and chain future increases to the consumer price index — a feat that took considerable effort on our part.

Lowering this threshold will reserve an additional $50 million-plus in Berry-compliant contracts for domestic textile manufacturers who supply the U.S. military.

There are numerous other issues requiring NCTO’s focus and resources, such as the need to pass a new Miscellaneous Tariff Bill that grants relief on unavailable component materials but doesn’t allow unnecessary duty relief on sensitive finished textiles — and continued engagement with the Hill to vigorously oppose attempts by importers to expand the Generalized System of Preferences to apparel and footwear.

Time simply will not allow for me to go into detail on all these important issues. With that said, please know that without exception, NCTO is highly engages on every policy matter that affects the U.S. textile industry with the intent of shaping policy determinations in a manner that directly benefits U.S. textile investment, production and workforce. 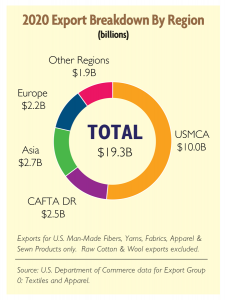 That concludes my formal remarks.

On a personal note, I am honored to serve as chairman of such an incredible organization on behalf of a vitally important industry.

Through our leadership, NCTO has carved out a seat at the policy table in Washington and that is critical in terms of ensuring our industry’s interests are represented and reflected in critical policies and legislation.

It has been a year marked by challenges and resiliency and our industry has remained strong throughout this crisis.

I am optimistic about the future, knowing that I am part of an industry that made such an incredible commitment to our nation, along with the willingness to come to those in need of aid.

Editor’s Note: David M. Roberts is CEO of Clover, S.C.-based Cap Yarns. He served as the 2020 NCTO chairman. At the annual meeting, Roberts was re-elected chairman for 2021; and David Poston, president of Palmetto Synthetics, was elected vice chairman.