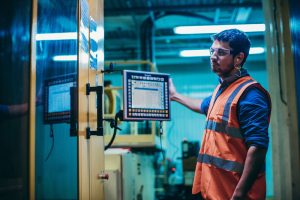 The use of automation in manufacturing faces challenges, but also presents opportunities.

U.S. textile and apparel shipments totaled $76.8 billion in 2018. Automation continues to assist in the growth of U.S. manufacturing, and this is particularly the case in the textiles, clothing and footwear industries. From the intelligent harvesting of cotton to digital printing processes — a revival in the US textile industry is underway.

The geographical distribution of textiles production has seen a dramatic shift in the past 50 years, with manufacturers moving a proportion of their production facilities from Europe and North America, to Asia and other developing parts of the world. However, things are changing. According to the International Federation of Robotics (IFR) Executive Summary World Robotics 2019 report, there are five major markets for industrial robots — China, Japan, the United States, the Republic of Korea and Germany — which account for 74 percent of global robot installations.

In recent years, the increase in automation, coupled with the rapidly rising wages in Asia, has seen some manufacturers shun the offshore production business model. Instead, aided by good transportation infrastructure and a workforce that can handle new technologies, home soil offers new production draws. According to the Washington-based National Council of Textile Organizations (NCTO), the U.S. textile industry invested $22.8 billion in new plants and equipment from 2006 to 2017. It’s clear that textile manufacturers are shifting priorities to increase productivity and boost efficiency.

The latest statistics from the IFR Executive Summary World Robotics 2019 Industrial Robots report shows the growing uptake of automation. However, compared with the success of automation in the automotive industry, which accounts for 30 percent of all robot installations worldwide; and the electrical industries, which has seen robot installations increase by 24 percent on average each year since 2013, the textile industry has seen a relatively lower rate of change.

During the early Industrial Revolution, entrepreneurs in the U.S. cotton textile industry began to use mechanized looms to keep up with production demands. Fast-forward to the present day, and today’s technology objective hasn’t changed. Today, the textile industry aims to meet the demands of today’s consumer, who wants high-quality goods at reasonable price points delivered quickly.

Machines have played a role in textile manufacturing for centuries, but human workers have historically taken on the labor-intensive craft of garment assembly — sewing each piece of fabric together to create a finished product.

Largely because of the overarching properties of fabric, automated handling tasks such as the precise placement of parts becomes more difficult when dealing with flimsy and flexible materials. This could however be changing.

In the sewing process, automation traditionally has been limited because of the level of control and complex motions required. New robots are now using mapping technology, cameras and artificial intelligence to adjust fabric as needed in automated textile supply chains. The new automation possibilities could boost production volumes and save businesses money. Automation could produce results with higher accuracy than human workers, while needle placements can be tracked with variations less than half a millimeter. This improves consistency in size of product.

Even fabrics prone to folding and stretching are compatible with these new robots, which can detect fabric positioning and make the necessary adjustments without human input.

The production of more simple garments such as socks is already highly automated, but offers further scope for improvement. Machinery is becoming more flexible and could adapt to rapid alterations in patterns, personalization and design.

Another area of textiles manufacturing that can benefit from automation is quality control. Consider the following example. During the fabric dyeing process, it is essential that parameters such as the temperature, pressure, water level, water flow, time of treatment and formula all remain consistent to achieve a uniform shade. To ensure quality standards are met, a central computerized management system can control these processes extremely accurately.

A computerized color matching system (CCMS) can ensure accurate repeatability. After all, if a human worker accidentally altered a pigment measurement by as little as a milligram, this would result in a color variation and a defective product. Eliminating this human error may result in cost savings for manufacturers, by reducing product waste.

Automation in the textiles sector will have a massive impact on other jobs too. In fact, the U.S. government estimates that one textile manufacturing job in this country supports three other jobs. In 2018, the U.S. textile industry supply chain employed 594,147 workers.

In the years to come, we may see human workers removed entirely from the garment manufacturing process, in favor of automated sewing robots. However automated technologies will not replace jobs, they will simply create new roles demanding employees with an entirely different skill set, to implement, control and maintain new technology.

From spinning, knitting, weaving and dyeing to printing, gluing and bonding, automated technologies are having a profound impact on the textiles manufacturing process. Robots and automation are addressing the challenges of high labor costs in a commercial environment where consumers are expecting more.