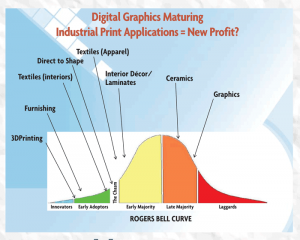 InPrint USA closed the doors on its first edition with optimism, having fully met the expectations of the organizers and satisfying both exhibitors and visitors. The show was held recently at the Orange County Convention Center in Orlando, Fla., and was collocated with the International Converting Exhibition (ICE) USA. More than 3,400 attendees visited the collocated shows.

“We are very excited about how well InPrint USA has been received,” said Marcus Timson, cofounder, InPrint. “There is definitely a need in the largest manufacturing market in the world for a show dedicated to educating and offering solutions for industrial print applications.”

According to InPrint cofounder Frazer Chesterman, InPrint’s mission is to show printing technologies for the industrial environment that help manufacture end products. Typically, these technologies print or deposit ink onto a product for either functional or decorative purposes, particularly using inkjet technology.

After successful shows in Europe — Hannover, Munich and Milan — the InPrint founders polled the marketplace to determine where growth was occurring in the industrial printing area and where it would make the most sense to host the next InPrint show. The most common response was the United States. Chesterman said he was excited to bring a concept developed in Europe to the United States because the United States is open to innovating.

Industrial printing covers a wide gamut of applications including graphics, ceramics, direct-to-shape and 3-D printing, in addition to textile and apparel printing. The number of exhibitors at the show presenting technologies for digital textile printing was small, but there certainly is room for much growth in this segment, which is in its infancy. Chesterman shared a bell curve graphic comparing digital printing technologies (See Figure 1) that illustrates how graphics and ceramics are maturing industries, while textiles for apparel and interiors as well as furnishings are young industries with much potential. “At the moment, the U.S. market for digital printing is mostly for the sports and T-shirt market,” said Chesterman. “But I see the biggest opportunities in the United States in home furnishings, including textile wall coverings where there is growth in fabric substrates.”

According to Chesterman, a push and pull scenario between industry and consumers is driving growth in digital printing. Industry is constantly improving the technological supply — increasing speeds, developing new inks and coatings, and offering a greater range of substrates — and pushes this technology into the marketplace. On the other side, consumers pull with demand for speed, efficiency, local production, flexibility and reshoring.

“Our company sold three machines right off the show floor,” said Bill Lydick, founder, PDS Equipment, Nashville, Tenn. “We were thrilled with the visitors’ response, considering InPrint is a brand new show in the U.S. market.”

“We didn’t know what to expect, but measuring success of the show based on the quality, not quantity, of the visitors the event has surpassed our expectations,” said Ken VanHorn, vice president, marketing and operations, Mimaki USA, Suwanee, Ga. “I received a lot of inquiries about our digital textile printing equipment, which I wasn’t expecting. We think a lot of momentum has been established over the past few days, and it would be great to host the show in the United States again next year and build on this momentum!”